Arab cinema: films with a conscience 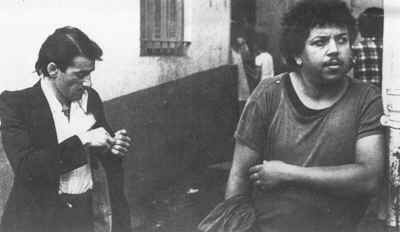 The historical notes below were issued by Channel Four television to accompany a season of Arab films shown on British TV in the late 1980s.

Even between Lebanon and Iraq in the Middle East or the countries of the Maghreb (North Africa) there are enormous regional and national differences. That said, the following is effectively a lineage of socially-conscious filmmaking with only passing reference to its specific contexts.

Along with Chahine, the filmmakers in Egypt most associated with this trend are Chadi Abdessalam, for only one feature, The Mummy (1969), and Tewfiq Salah, whose early formation also included Victoria College. Salah’s work is somewhat limited by the effects of censorship whims but includes, with The Cheated (1971), The Rebels (1969), set in a hospital and dealing with inegalitarian healthcare and authority without responsibility. The film was withheld for some time and only released with cuts.

Syria is one of the few Arab countries to have had indigenous production since the beginning (1928) and to host a regular film festival; however, production is sporadic. Samir Zikra and Oussama Mohommad are two young filmmakers who trained in Moscow and are just beginning their careers. The best known films remain The Leopard (1972) and Mr. Progressive (1973) by Nabil Maleh; Omar Amiralay’s documentary Daily Life In A Syrian Village (1974) and Mohamed Malass’s City Dreams (1984), about a child’s entry into the adult world of the 40s.

In several countries production is largely state-controlled: Iraq, for example, produced Mutawa And Bahia about an Egyptian peasant trying to persuade Sadat not to sign the Camp David Accord, several films have been set against the war and a few aimed at entertaining a tired population. In other countries production could be greater, but is not: the Kuwaiti Khaled el Seddiq, for example, studied in India and made his first feature in 1972 (The Cruel Sea), about the pre-oil life of pearl divers; his second was The Wedding Of Zein (1976), based on the novel by Sudanese writer, Tayeb Saleh.

The Lebanon, on the other hand, has had commercial studio facilities for years and several producers and cinema-owners of Lebanese origin operate throughout Africa and the Arab world. But the work of younger filmmakers has featured the war situation. Documentary-maker Jocelyn Saab has recently completed her first fiction: Sweet Adolescent Love. Mai Masri (Palestinian) and Jean Chamoun, on the other hand, have only made documentaries, of which Fleurs D’ajonc (Gorse flowers) is the most recent (1986). It shows women in the country, resisting, protecting, nurturing against all odds. Maroun Baghdadi has made both documentaries and the fiction The Little Wars in 1985; Borhane Alaouie has also made Beirut, The Encounter (1982) and a documentary on the Lebanese Shi’a. In 1980, the Algerian filmmaker, Farouk Belloufa, made Nah’la, in which a journalist goes to report on the situation and becomes involved in Beirut life (unlike Schlondorff’s hero for whom the city and people were just a backdrop). 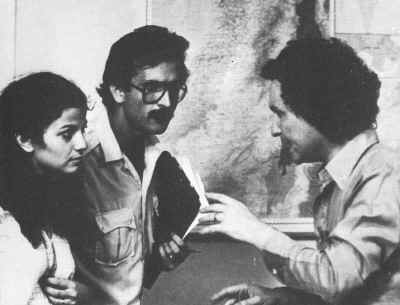 Egypt has not been without other ‘new generation’ filmmakers: for example, Ali Abdekhalek (Song On The Track 1983); Daoud Abdelsayed, Atef Tayeb, Achraf Fahmi; and Mohamed Khan, whose work includes an adaptation of H E Bates’ The Darling Buds of May (Reported Missing).

But a real departure for the new socially-aware cinema had taken place in North Africa, when after several decades of French colonialism, Tunisia and Morocco became independent in 1956, and Algeria in 1962. Filmmakers emerged "armed with the philosophy of Frantz Fanon" and the idea that "the political liberation of the third world was going to change the face of humanity" and bring about the "birth of a new man" (Ferid Boughedir)

The Algerian struggle had been portrayed by Chahine in Djamila The Algerian (1958), based on the book by Maitrel Jacques Verges about the trial of resistance fighter Djamila Bouhired. Otherwise there had effectively been nothing and for several years producing the history of colonialism and of the war and celebrating the heroes and martyrs was a major project of the State-run cinema: Dawn Of The Damned (1965) and The Opium And The Baton (1969) by Ahmed Rachedi; Wind From The Aures (1966) and Chronicle Of The Years Of The Brazier (1974) by Mohamed Lakhdar-Hamina and prize-winners at the Cannes Film Festival. In 1972 the National Cinema Office (ONCIC) was set up and in 1975 the 2nd Congress of the Panafrican Federation of Filmmakers was held in Algiers and produced its first manifesto. The Agrarian Revolution had begun in the early 70s and was reflected in films like NOUA (Abdelaziz Tolbi, 1972), made for the national television, RTA, which has made a considerable contribution to film production. In the same year ONCIC produced a poetic black and white film by Mohamed Bouamari, The Charcoal Burner: "a look at the other Algeria, frustrated and precarious, invaded by industrialisation". (Lotfi Maherzi)

There is also no shortage of comedy - in the characters of Inspector Tahar and Hassen Terro - but a complete knockout for the audience (and those in power) was Omar Gatlato by Merzak Allouache (1975) about a poor and crowded Algiers neighbourhood and Omar, doing an unsatisfying clerical job and so macho that when he is interested in a girl he can’t follow through and approach her. Here was not the "new man" but the actual man in the street and the film blew fresh air through the cinema and established thinking. Later there was Allouache’s Adventures Of A Hero (1978); Ali In Wonderland (Ahmed Rachedi, 1980) and The Crazy Years Of The Twist (Mahmoud Zemmouri, 1982).

In Tunisia there is a state structure but not Algeria's commitment. Brahim Babai produced the first socially-aware film, And Tomorrow? (1971). Hitherto Tunisia’s assets were (and remain) the Carthage Film festival (inaugurated by one of the ‘founding fathers’ of Arab cinema, Tahar Cheriaa) and a thriving amateur film movement (whose founder, Omar Khlifl, made The Dawn, 1966 and The Challenge, 1985) and through which many filmmakers have passed. An international breakthrough came when Soleil Des Hyenes (Ridha Behi, 1977) was presented at the Cannes Film Festival. Abdellatif Ben Amar followed in 1979 with Aziza after the equally praiseworthy Sejnane (1974), both focussing on the situation of women; in 1982 Taieb Louhichi made Shadow Of Earth, and in 1984 Nacer Khemir made Les Baliseurs Du Desert in the vein of 1001 Nights. Ferid Boughedir produced the excellent documentary Camera Arabe in 1987, which ended with an appreciation of Nouri Bouzid’s first feature. Man Of Ashes (1987) has been warmly received for its honest study of masculinity, child abuse and its portrayal of a time in Tunisia when Jews and Arabs lived peaceably together.

In many ways Moroccan filmmakers have the hardest job, trying to produce without real state support or interest. Virtually everyone is on his own and some have only made one film. The first important Moroccan film did not appear until 1970: Hamid Benani’s Traces, about an orphan boy with a strict Muslim adoptive father. Two years later Souhel Ben Barka made A Thousand And One Hands about the situation of dyeworkers, following it in 1975 with The Petrol War Won’t Happen and in 1982 with Amok, a story set against apartheid and liberally based on Paton’s Cry my Beloved Country. Ben Barka has now constructed a private but much-needed cinema complex in the country.

The 1970s also saw two Moroccan films of poetic realism - Moumen Smihi’s El Chergui Or The Violent Silence (1975) about the problems of a young wife; and Ahmed el Maanouni’s Oh The Days (1978), a dramatised documentary about peasant life and the imagined promise of France. But in the 80s Moroccan filmmakers have been the most prolific: Mohamed Reggab’s The Hairdresser From A Poor District (1982); Taieb Sakkiki’s Zeft (1984); as well as The Great Voyage by Abderrahmane Tazi (1981), Mustapha Derkaoui’s The Beautiful Days Of Scheherazade (1982) and Jilali Ferhati’s Reed Dolls (1981), which tells the tragic story of a young girl married against her wishes, widowed while pregnant and deprived of her children by the courts.