Blow by blow: the Gulf's extraordinary war of words over Qatar

On his recent trip to the Middle East, Donald Trump posed for cameras sitting side by side with the emir of Qatar. "We are friends," Trump said, shaking the emir's hand. "We have been friends now for a long time. Our relationship is extremely good." So good, apparently, that Trump was hoping to sell Qatar "lots of beautiful military equipment, because nobody makes it like the United States."

Little more than a week later, though, the emir is in the doghouse and, if you believe his critics, not the sort of person to be trusted with American weaponry, no matter how "beautiful" it might be. Since Tuesday, Qatar and its emir have faced a barrage of attacks from Saudi and Emirati media – attacks which have clearly been launched with the blessing of their respective governments. Qatar now stands accused of jeopardising the Gulf's security and prosperity, and – in the words of one headline – committing political suicide.

The trigger for this furore was a news item purporting to quote remarks made by the emir at a military graduation ceremony in Qatar. The story appeared briefly on the website of Qatar's official government news agency, QNA, before the website went offline amid Qatari claims that it had been hacked. Days later, the website is still unavailable.

After some initial uncertainty about the authenticity or otherwise of the report, it is now clear that the story was fabricated. A military ceremony did take place and the emir was present but numerous sources – including people who were there – insist that the emir made no speech.

The event had also been filmed for Qatari television but none of the broadcast footage shows the emir speaking. All claims about what the emir is supposed to have said are derived from a single source: the now-vanished story on the news agency's website.

Regardless of that, Saudi and Emirati media continue to behave as if the story was true. While some have reported Qatar's claims of fabrication – only to dismiss them – others have ignored them completely. On Wednesday, for example, Sky News Arabia, based in the Emirates, reported (in Arabic) that QNA had "withdrawn" the story without mentioning Qatar's claims that the website had been hacked. Instead, it invited readers to watch a video of the emir's speech as broadcast on Qatari television. Disappointingly for viewers, video showed scenes from the military ceremony but none of the emir speaking.

With a little more honesty, Saudi-owned al-Arabiya and Gulf News in the Emirates did acknowledge Qatar's complaints of hacking, after a fashion, by posting short reports from Agence France Presse (cached copies here and here) but these have since disappeared from their websites (here and here).

In any case, Al-Arabiya made clear that it did not believe the website had been hacked. On Wednesday it published an article claiming to have "proof" that QNA was not hacked. Basically, it cited Qatari television and QNA's social media accounts as corroboration for the story of the emir's speech when all they had done was regurgitate bits of the bogus report while it was still live on QNA's website. (For more details see previous blog post.)

Meanwhile, on Saturday, an article in the Saudi Gazette continued to attack the emir as if his speech were an established fact. "There was no justification for what the Qatari ruler, Sheikh Tamim Al-Thani, said," it complained:

"The worst impact of his speech was that it drew condemnation of Qatar’s strange political behaviour. It also exposed the Emir’s haughtiness and his move to compare himself with highly experienced rulers in the region who have mastered the art of politics, ruling large countries and steering them through major events and crises, unlike Qatar, which has only experienced a storm in a teacup."

The scale and ferocity of this onslaught has been extraordinary, though the visible part so far is only a media war: the Saudi and Emirati governments have been almost entirely silent, though they have blocked various Qatar-linked news websites. But to view this frenzy as something cooked up purely by the media would be a mistake. Mainstream journalists in the Arab countries don't suddenly start attacking another Arab head of state without some signal of approval from on high: it would be more than their jobs (and liberty) are worth.

Al-Arabiya, based in Dubai's Media City and owned by the Saudi MBC company, is a competitor of Qatar's al-Jazeera. Between Wednesday and Sunday it posted at least ten articles about the emir and/or his alleged speech, most of them hostile:

The last of these articles is rather amusing. It accuses the emir of falsely claiming descent from Muhammad ibn Abdul Wahhab, founder of the intolerant Wahhabi sect whose doctrine lies at the root of many of Islam's contemporary problems. Saudi Arabia is surely the only country where people would think worse of someone for not being related to Abdul Wahhab. 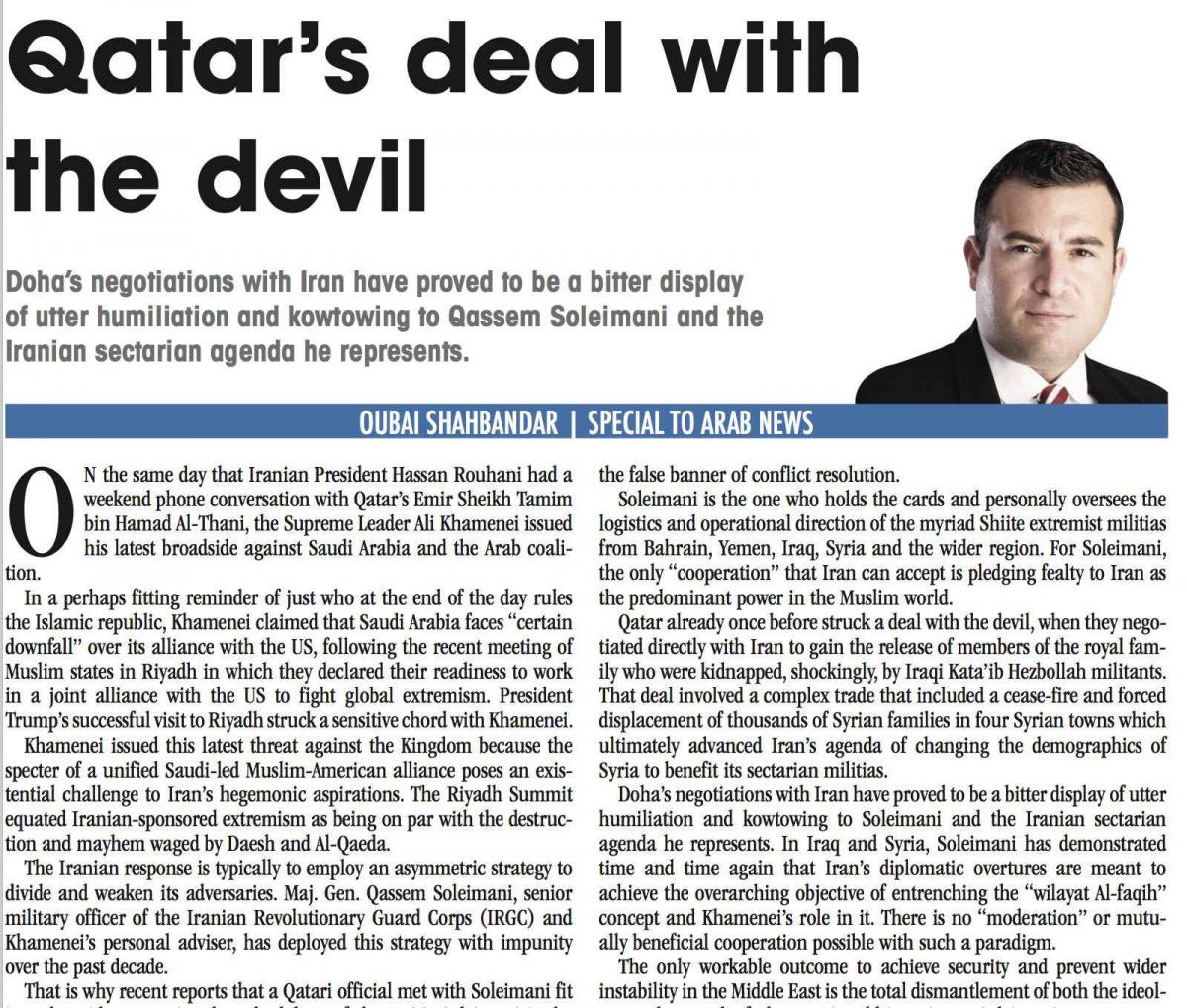 The last item is a bizarre tale of intrigue alleging that Iraq helped set up a secret Qatari-Iranian meeting in Baghdad – at a cost to Qatar of $500 million:

"The secret meeting had been arranged by the Iraqi government in return for Doha not demanding $500 million left suspiciously by Qatari officials at Baghdad airport following the release of Qatari hostages held during a hunting trip in southern Iraq." 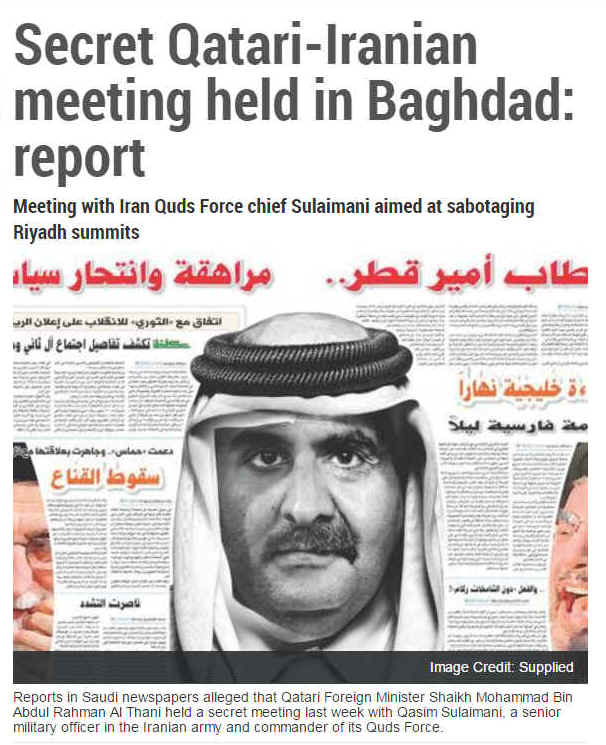 The onslaught against Qatar continued on Saturday with a stern editorial in the Emirati newspaper The National:

"Comments such as these by the emir are profoundly dangerous. They destabilise relations within the GCC. They sow division between the GCC and our allies around the world. And of greatest concern, they give Iran the perception that it can divide the Gulf states."

The editorial also cast doubt on Qatar's claim of a cyberattack, saying its protestations of innocence would carry more weight if the emir's reported comments had "deviated wildly from his country’s stated policies and world view. No wonder the Gulf states are reluctant to believe Doha’s explanation."

That is an interesting point, because Qatar is in the odd position of denying having said things that it actually thinks. The remarks attributed to the emir at the military ceremony mostly reiterated Qatar's previously-known positions on various issues – notably Iran and terrorism.

The question this raises is why anyone would see a need to concoct an imaginary speech that reflected the emir's real views, or something pretty close to them.

One answer is plausibility. The purpose of fake news is to fool people into believing it and, as things stand, there are plenty who believe the quoted remarks from the emir were genuine. Too much deviation from things the emir might be expected to say would have cast doubt on the story's authenticity.

The key point, though, is not so much the story's content as its timing – just two days after the "Muslim summit" in Riyadh attended by Trump. It looked like a defiant gesture from the emir towards a meeting which had succeeded in deflecting attention away from the machinations of Arab states and focused on Iran as the main cause of the region's problems.

Without the story of the emir's speech there would probably still have been rumbings about Qatar's attitude from other Gulf states but the story – true or not – provided something around which to build a campaign aimed at bringing Qatar into line.

According to Qatar's foreign minister, Mohammed bin Abdulrahman Al-Thani, there had already been moves in the United States to put pressure on Qatar ahead of the summit. During the previous five weeks, he said, 13 articles about Qatar had appeared in American media – which the minister considered an unusually large number.

At least four of these articles, though in different publications, had all been written by people working for a single Washington-based think tank, the Foundation for Defense of Democracies (FDD):

By a remarkable coincidence, on 28 May – the day of the emir's alleged speech to his troops – the Foundation for Defense of Democracies was holding a conference in Washington aimed at influencing American policy towards Qatar. Organised in conjunction with the Hudson Institute and the Center for Cyber and Homeland Security, its title was "Qatar and the Muslim Brotherhood’s Global Affiliates".

During a "keynote discussion" chaired by Fox News anchor Jenna Lee, Robert Gates (a former defense secretary under the Bush administration) accused Qatar of reneging on previous commitments and said the US should send an envoy to the emir with a list of activities that Qatar must stop supporting, "otherwise the nature of its relationship with them will change". Gates also hinted that the US might pull out of the Udeid airbase in Qatar (built at the previous emir's expense) which serves as Centcom's forward headquarters.

In another session at the conference, Ed Royce, chair of the Foreign Affairs Committee in the US House of Representatives, said he would introduce legislation threatening sanctions against countries that provide support for “terrorist elements of the Muslim Brotherhood” and Hamas in particular. Royce suggested the threat of sanctions could persuade Qatar to end its support for the Brotherhood. “We need to see a change in behaviour immediately,” he added. 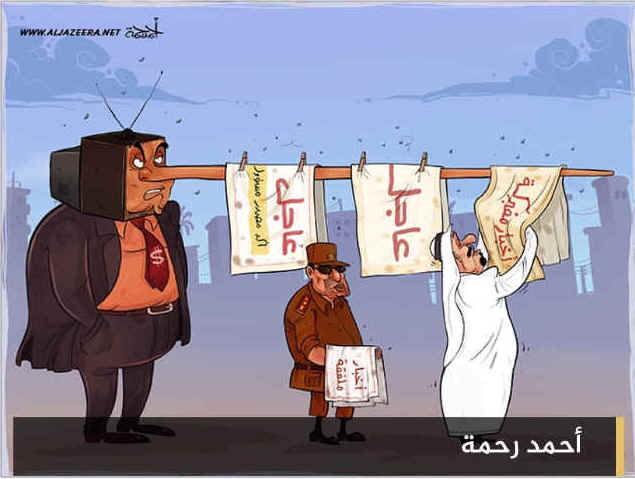 Qatar certainly has dodgy friends, but targeting it in this way is more about politics than combating terrorism. If terrorism were the main issue there would also be talk of sanctioning Saudi Arabia (to name but one) instead of supplying it with weapons.

Qatar's choice of dodgy friends is also quite eclectic. Besides Islamists, it has also developed connections with the religious right in the west – most notably Mormons and the more reactionary sections of the Roman Catholic church. It even funded research by a British think tank which helped to shape the social policies of David Cameron's government. That sort of activity by Qatar rarely gets a mention.

However, the central issue in the current war of words appears to be Qatar's relations with the Gulf Cooperation Council and Iran. Qatar is a member of the GCC, along with Bahrain, Kuwait, Oman, Saudi Arabia and the UAE but, to the disappointment of these other members, generally tries to chart its own course where foreign policy is concerned.

In particular, it doesn't buy the GCC's often hysterical view of Iran. There's also a practical reason for that, since geography has forced Qatar and Iran to share the world's largest gas field.

James Dorsey, a senior fellow at in international studies at Singapore’s Nanyang Technological University, explores the political background in a recent article. Dorsey sees the latest moves as an attempt to pull Qatar – kicking and screaming, if necessary – more firmly into the GCC fold:

"An earlier attempt by Saudi Arabia, the UAE and Bahrain to force Qatar to align itself with the three states’ hard line positions failed in 2014 when Qatar refused to bow after they withdrew their ambassadors from Doha. The ambassadors returned to their posts after a 10-month absence with little, if any, change in Qatari policies."

It remains to be seen whether Qatar's Arab neighbours will have more success this time than they did in 2014.