Earlier this week a story appeared on the website of Qatar's government-run news agency quoting what it said was a speech made by the emir at a military graduation ceremony. The remarks attributed to the emir brought a furious reaction from Saudi Arabia and the United Arab Emirates. Qatar responded by saying the news agency's website had been hacked and the story was a fake.

The gist of the emir's speech, as reported on the website, was that he suggested the Trump administration might not survive for long, that he saw "no wisdom in harbouring hostility towards Iran”, and that he defended Hamas, Hizbollah and the Muslim Brotherhood.

The political significance of this, and the reason for the uproar, was that the emir appeared to be criticising the "Muslim summit" in Saudi Arabia last weekend where Arab leaders flattered Trump shamelessly and presented Iran as the main cause of the Middle East's problems. The emir also appeared to be diverging from the summit's line on terrorism.

But did the emir actually say this, or not? So far, the only evidence that he might have said it is the now-vanished page on Qatar News Agency's allegedly hacked website.

There is no dispute that the emir attended the military graduation ceremony but there are disputes as to whether he made a speech. Some Qataris say not. As yet, no audio or video recordings of any speech there have come to light.

At the same time, though, we only have the Qataris' word that the news agency's website was hacked. Currently, the website is still off line – but that doesn't really prove anything.

However, regardless of Qatar's insistence that the emir did not say what he was alleged to have said, the remarks themselves are certainly plausible. They are broadly in line with Qatar's known position and could easily reflect what he says in private, if not in public.

Viewed in that light, some see the hacking claim as a cooked-up excuse – as way of dissociating the emir from something that has caused an unexpected level of political embarrassment.

But if it's difficult to be sure that the Qatar News Agency was hacked, it's also difficult to prove that it wasn't – despite the efforts of Saudi and Emirati media to do so.

For example, a headline in Arabic from the Saudi-owned al-Arabiya proclaims: "Evidence ... The Qatar News Agency website was not hacked".

Al-Arabiya's Exhibit A is a news clip from Qatari television which shows the emir at the military ceremony. Al-Arabiya notes that this was broadcast before the hacking claim and treats it as independent corroboration of the emir's remarks.

Unfortunately, though, it doesn't prove anything. In the news clip, the emir is not seen or heard speaking. Subtitles and a voiceover commentary describe what the emir is alleged to have said, based on Qatar News Agency's report. In other words, the news clip is not a second source but merely a regurgitation from the original (and subsequently disputed) source.

Exhibit B from al-Arabiya is a series of posts by Qatar News Agency about the emir's alleged speech on Instagram, Facebook and Google Plus. Al-Arabiya points out that it would be difficult to hack all of these at the same time as hacking the agency's website.

However, the social media posts could easily have appeared without anyone hacking those accounts. It's reasonable to suppose that whoever was in charge of social media output at the news agency would have carried on working normally, posting about whatever appeared on its website until the hack – if that's what it was – was discovered.

Al-Arabiya also points out that the disputed story appeared on the agency's website in both Arabic and English. Again, though, this doesn't really disprove the hacking claim. If hackers were able to post a fake story in Arabic there is no reason why they couldn't also post a translation of it in English. Alternatively, it's conceivable that someone working at the agency translated the story in good faith.

Meanwhile, if the Qataris are serious about their hacking claim they should provide some evidence. Simply saying that the story was "false" and that the website was hacked by "an unknown entity" (as the Government Communications Office did) is not going to persuade any sceptics. They should provide more details. Otherwise, they can't complain if people come to different conclusions. 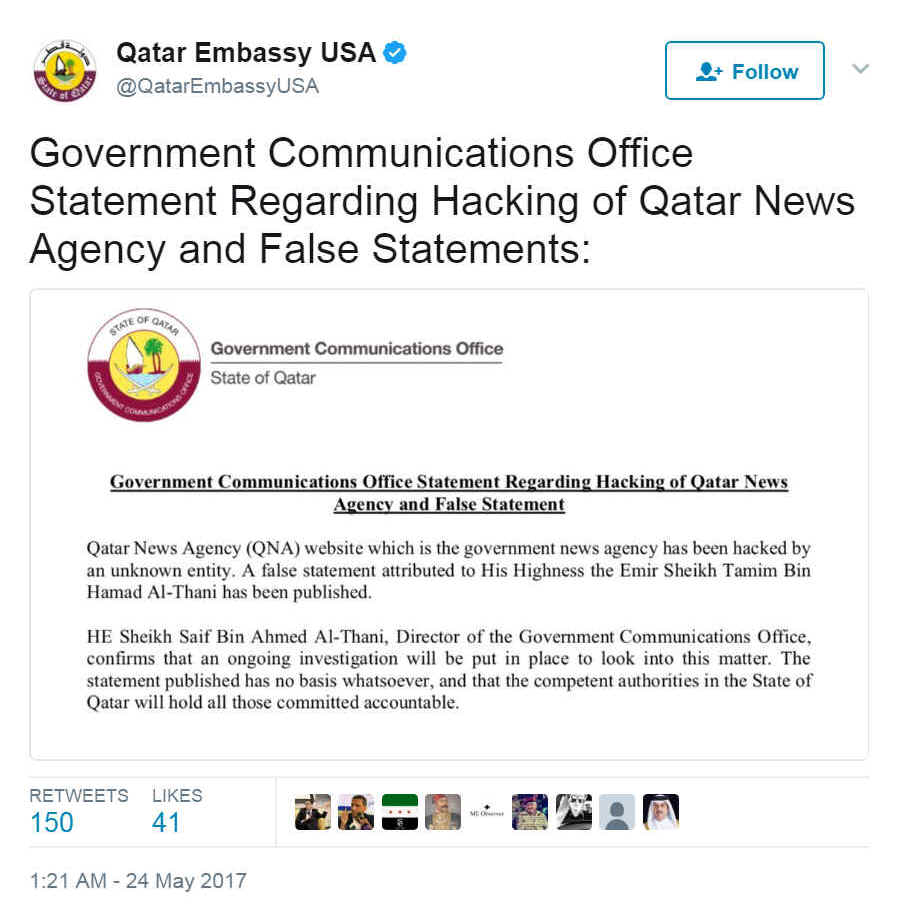