Pomp, circumstance and a 'sheikh' from Qatar 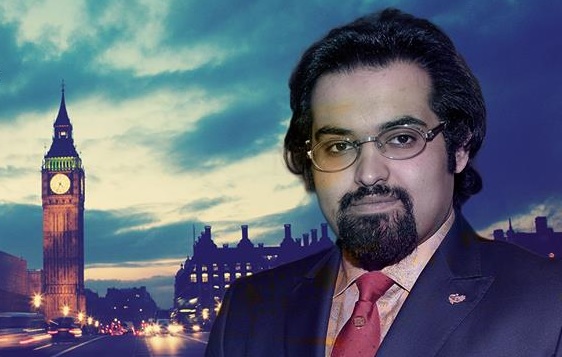 Khalid al-Hail, a 29-year-old Qatari living in exile in London, is a man with grand ideas. People address him as "Sheikh Khalid", though on Facebook he prefers to call himself "His Excellency".

Variously described as a businessman, philanthropist and reformist, al-Hail is best known as the self-appointed leader of "the Qatari opposition". His demands for the current emir to be replaced have found favour in Saudi Arabia and the UAE (both of which are pursuing their own quarrels with the emir) but in Qatar itself there is scant evidence of support for al-Hail or his opposition movement.

Meanwhile, a hugely expensive "Qatar opposition" conference hosted by al-Hail in London last month – which had been billed as bringing together "hundreds of world-renowned political figures, policy makers, academics, commentators and Qataris" – was sparsely attended.

Since moving to Britain a couple of years ago, "His Excellency Sheikh Khalid" has continued to show aspirations of grandeur. Gripped by what looks like a sort of reverse Orientalism, he became enamoured with the more exotic side of British life – pomp, circumstance and ceremony – and wanted to share in them.

Suddenly, as if some fairy godmother had waved a magic wand, these dreams started to come true. Before long, Khalid al-Hail had been installed as a Freeman of the City of London, a Knight in the Order of St Stanislas, and a Patron of the British Monarchist Society.

Impressive as they might sound, these titles are virtually meaningless. "Freeman of the City of London", for instance, is an institution dating back to the 13th century but nowadays brings no particular privileges though in theory it does give al-Hail the right to stop traffic on London Bridge while he drives sheep or cattle across it.

Nevertheless, al-Hail was clearly thrilled to receive the Freedom of the City and, after a traditional ceremony in the medieval Guildhall, he posted a photo of himself on Facebook holding his certificate. 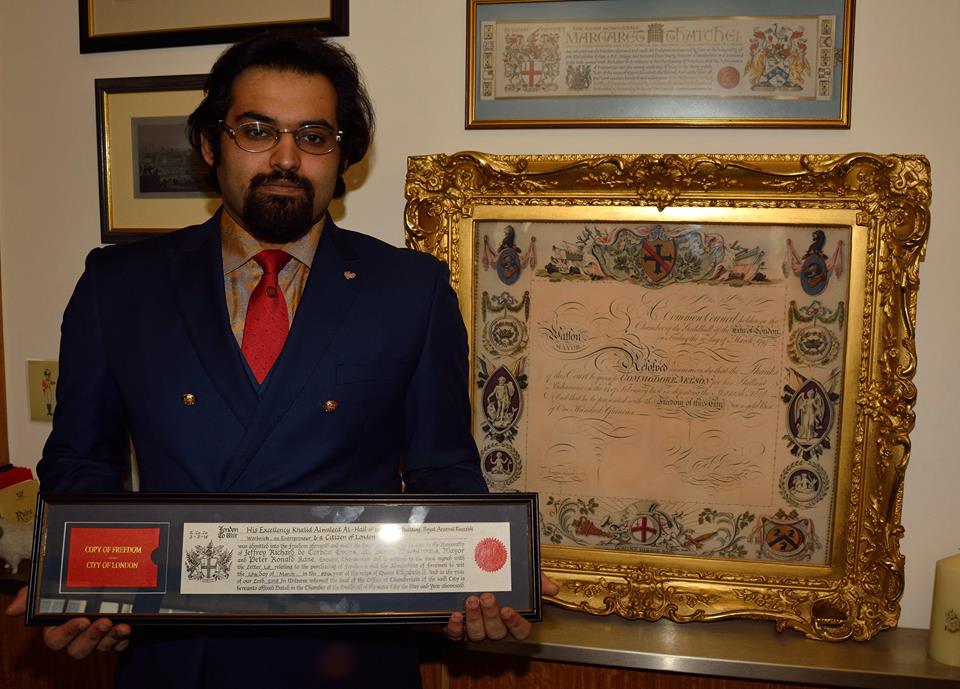 The Facebook photo attracted several messages of congratulation, one of which appeared at first glance to have been posted by Prince Harry, fifth in line to the British throne: 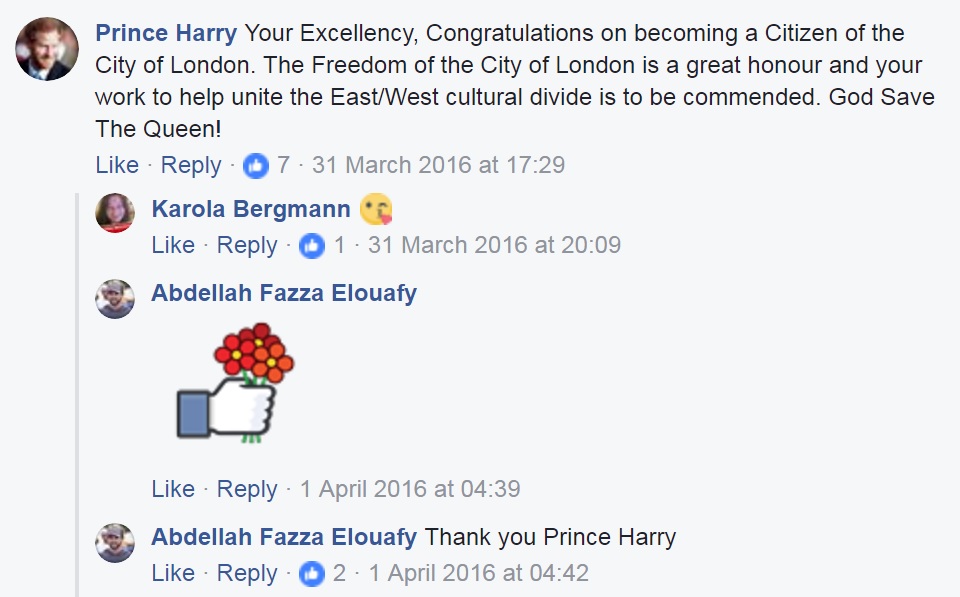 On closer inspection, however, the message had not come from the Queen's grandson but from the Prince Harry Fans Page, an offshoot of the British Monarchist Society.

In fact, it was through the British Monarchist Society, an obscure organisation infatuated with royalty, that al-Hail had acquired his Freedom of the City, along with his other British titles. 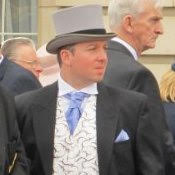 The society is run by Thomas James Mace-Archer-Mills, an American citizen with a posh English accent who previously used the name Thomas James Muscatello Delacroix Mills. Mills is assisted by 79-year-old "Dame" Mervyn Redding who also happens to be a Liveryman [sic] in the Worshipful Company of Basketmakers. As a member of that historic body she is entitled to nominate people for Freedom of the City – which is what happened in al-Hail's case. 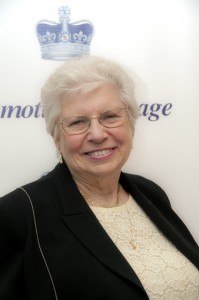 In another of her many roles "Dame" Mervyn is Grand Prior and "Dame Commander with Collar" in the Order of St Stanislas – an unofficial order of chivalry whose members do charitable work and hold ceremonies dressed in regalia. This explains how al-Hail became a "knight" of St Stanislas.

For good measure, Al-Hail also became a patron of the British Monarchist Society itself – it has more than 30 of them, mostly Conservative MPs, plus former UKIP leader Nigel Farage.

Hail's relationship with the British monarchists was at least partly a business one. In January 2016, Mace-Archer-Mills, al-Hail and "Dame" Mervyn all became directors of a newly-formed company called Orb and Sceptre Communications. Rather oddly, though, documents filed at Companies House a few weeks later state that Mace-Archer-Mills and al-Hail both resigned as directors on the day they were appointed. Orb and Sceptre was compulsorily wound up in June this year, but not before it had registered a web address called qataraffairs.com. This was the website later used by al-Hail to promote the conference on Qatar held in London last month.

A letter ostensibly written by Mills last December describes the relationship with al-Hail in more detail. It says al-Hail offered to sponsor the society's magazine, Crown and Country, and came up with the idea of presenting a copy of it to the Queen in "a bejewelled wooden case".

According to the letter, that plan fell through – as did another apparently collaborative venture to produce a mobile phone game.

Al-Hail and the society also worked together on a failed documentary entitled Spectra which, according to the letter, was supposed to set out al-Hail's position on "democracy and the positive attributes of constitutional monarchy". Some filming took place but the project appears not to have been completed. 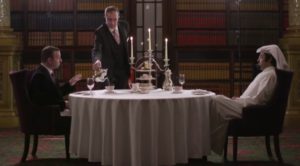 A copy of the letter, which was addressed to the Qatari ambassador in London, has been circulated on the internet. If genuine, it indicates a major falling-out between Mills and al-Hail towards the end of last year. Neither Mills nor the British Monarchist Society have responded to emails inviting them to confirm or deny the letter's authenticity.

Within a few months, though, Mills and al-Hail appear to have patched up any differences: Mills was the opening speaker at al-Hail's "Qatar opposition" conference in September.

A talent for networking

When al-Hail received his Freedom of the City, "Prince Harry" was not the only one to congratulate him on Facebook. Another celebratory message came from Jack Soames, an Old Etonian with high-society connections. Soames, who has also flatteringly described al-Hail as a "very handsome gentleman", runs an unusual kind of business enabling wealthy clients to "become integrated into the special and entertaining world of the English elite". 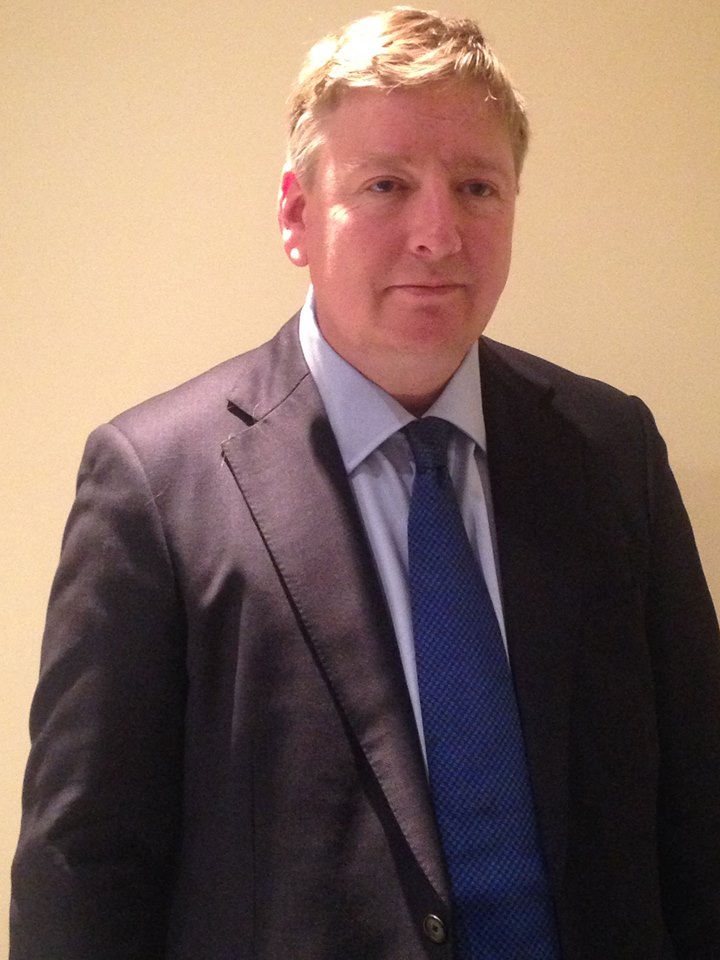 Soames works with what are known in the trade as UHNWIs – Ultra High Net Worth Individuals – and his website explains how his "talent for networking" can help them rub shoulders with the British establishment and perhaps acquire a touch of class.

"You too will be able to enjoy the activities and customs associated with royalty, the English countryside and high society. You will be able to participate in the London Season; stay as the guest of a Lord and Lady in their castle for golf or pheasant shooting; play or watch polo; take a box for premiership football; or race classic sports cars. With us, you will discover and gain access to the most agreeable and enjoyable lifestyle in the world."

That's not all. Should you be thinking of purchasing a yacht, a private jet or just a diamond necklace, Soames can take care of it. And if you are in need of a "discreet and trusted" banker, lawyer or accountant, he can provide introductions.

Soames's services do not come cheap, however, and according to the letter said to have been written by Mills, his fees for work done on al-Hail's behalf amounted to £35,000.

Some of it was PR-type work connected with al-Hail's Qatari opposition activities. Considering the strained relations between the UAE and Qatar, the Emiratis might have been expected to welcome this, but instead it rang alarm bells. The problem was a potential conflict between al-Hail's political lobbying and another of the UAE's Qatar-related interests: the Mohamed Fahmy case.

Fahmy, an Egyptian-born Canadian citizen, had served as al-Jazeera's bureau chief in Cairo. In 2013, following the military takeover in Egypt, the Sisi regime cancelled the Qatari broadcaster's licence and imprisoned Fahmy along with two colleagues.

Later, Fahmy filed a lawsuit in Canada against al-Jazeera claiming $100 million in damages, on the basis that it had failed to take proper care of its employees.

Apparently seeing some political mileage in this, the Emiratis were supporting Fahmy's legal claim. At the same time, though, al-Hail and Soames were wooing Fahmy too. The risk in this, from an Emirati viewpoint, was that it could harm Fahmy's case. His claim against al-Jazeera was about his former employer's duty of care and, ostensibly, had nothing to do with politics. If Fahmy became publicly associated with the Qatari opposition, his motives in bringing the lawsuit would be open to question.

Private discussions about this came to light recently in a series of leaked emails.

A British PR firm, The Cape Partnership, had been working with Fahmy's legal team since his imprisonment in Egypt. Andrew Wigley, one of Cape's staff, was monitoring progress on the Canadian lawsuit and liaising with Simon Pearce in the UAE's Executive Affairs Authority (which provides "strategic policy advice" to Mohamed bin Zayed, the Crown Prince of Abu Dhabi).

In an email to Pearce dated 5 October 2015, Wigley reported that he had arranged a series of meetings and speaking engagements for Fahmy who was on a visit to London.

"I will accompany him," Wigley wrote, "although will not join him for the meeting with the [Qatari] opposition figure he wants to meet – Khalid al-Hail and his PR man Jack Soames. I am advising against this meeting."

In another email to Pearce, dated 11 December 2015 and marked "urgent", Wigley complained that Fahmy seemed "enthralled to this Qatari Khalid al-Hail":

"He met him in London in October. He tweets his stuff ... I think he's in very frequent contact with him. I've repeatedly told him to steer clear. He argues there are mutual benefits. He's trying to play both teams. My fear is the risk of being set up."

Wigley's immediate concern was that Fahmy had drafted an op-ed article about Qatar's domestic politics which he hoped to place in the New York Times – and was asking for help to make it suitable for publication. "It makes me concerned how this manner of material impacts his legal action – which I have raised this evening with his lawyers," Wigley wrote.

Al-Hail had turned up at an event in Soho House, London, where Fahmy and his lawyer were speaking. Wigley commented:

"In what looked like a choreographed exchange, Fahmy gave him the floor and KAH [Khalid al-Hail] asked him questions about Qatar's domestic political situation. My interpretation of that exchange was that KAH sought to lead Fahmy to talk about domestic Qatari affairs in a public setting."

In the meantime, an article about Qatar which was far more polished than the one Fahmy had been touting earlier had appeared in the New York Times under Fahmy's name.

According to Wigley, al-Hail alluded to the article and its content during the Soho House event, "fuelling my belief that people around KAH penned the article and handed it to Fahmy to place. Bluntly, Fahmy doesn't have the writing skills to produce that type of content."