Telling it like it isn't: John Pilger and the Syria truthers 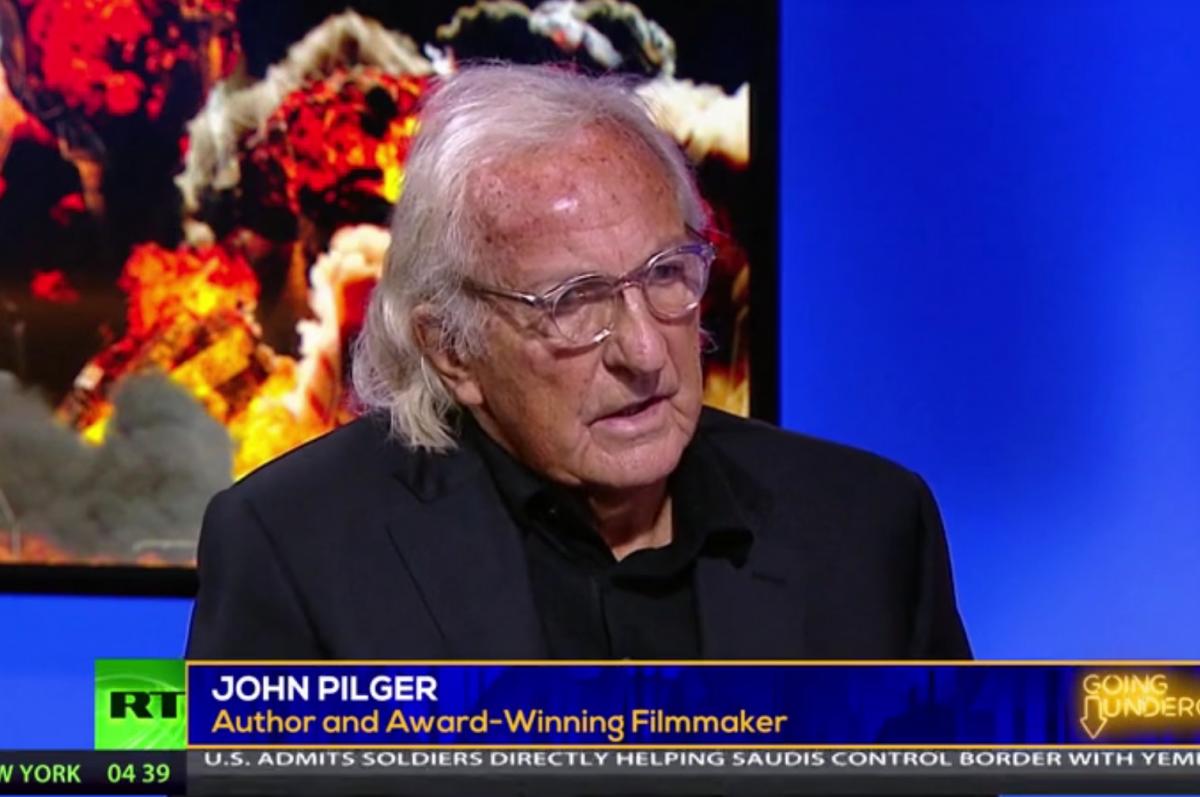 In a recent post on Twitter, British member of parliament Chris Williamson urged anyone interested in "proper journalism" to watch what he described as an "excellent" programme on RT, the Russian propaganda channel.

The programme was a 25-minute interview with veteran Australian journalist John Pilger who made his name covering wars in Vietnam, Cambodia, Bangladesh and Biafra. Pilger has many admirers besides Williamson and on social media especially he is treated with adulation. Twitter users describe him as "one of the few real journalists left", "a giant among journalistic dwarfs" and "the one who explores the truth". 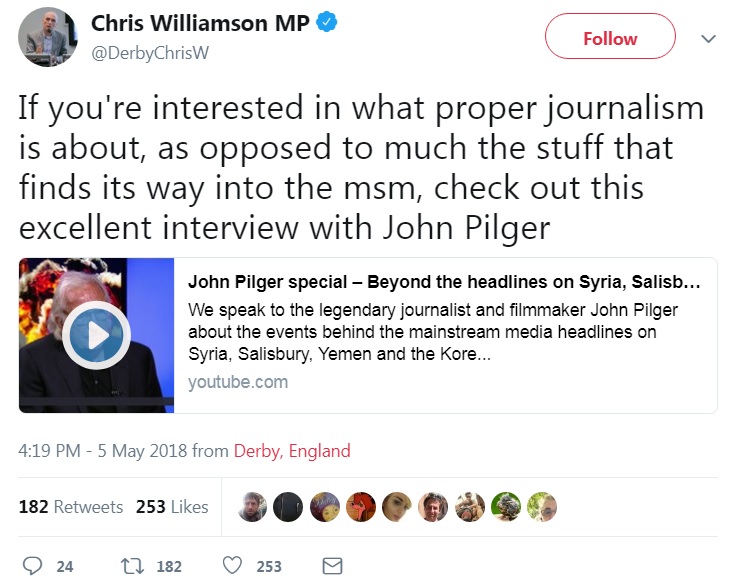 In the RT interview Pilger talked mainly about international politics and the failings of other journalists. Commenting on the poisoning of Russian double agent Sergei Skripal and his daughter in Salisbury last March, he told viewers the British government's version of the story was unravelling fast. Tests by a major laboratory in Switzerland, he said, had shown the chemical involved "wasn't a nerve agent, it was something entirely different".

Pilger went on to chastise fellow journalists for reporting the things governments say without asking enough questions about them: "To simply write down and swallow what governments tell you is the very antithesis of what real journalism is," he said.

Unfortunately, though, Pilger had just committed the sin that he was complaining about. In making his assertion about the Swiss lab and the Salisbury poisoning he was simply regurgitating a claim made three weeks earlier by Sergei Lavrov, the Russian foreign minister – a claim which had subsequently been discredited.

On April 14, Lavrov made a dramatic announcement which appeared to refute the use of a novichok-type nerve agent to poison the Skripals. He said a Swiss lab testing samples from Salisbury had detected a precursor for BZ – a chemical that incapacitates people but is not normally lethal. Based on that, Lavrov claimed the Skripals had been poisoned with BZ.

The OPCW, which organised the testing, later dismissed Lavrov's claim, saying the BZ precursor had not come from Salisbury – it was in a control sample included by the OPCW to check that labs were doing their job properly. 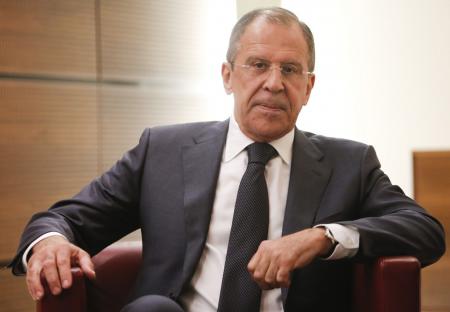 Turning to Syria, Pilger went on to inform RT viewers that the recent military action by the US, France and Britain had nothing to do with chemical weapons: "There's no real evidence of a chemical attack, so what we're seeing is the most intense campaign of propaganda – at least since the build-up to the Iraq war in 2003."

"It comes from a great tradition. It comes from 1945 – the cover story for dropping two atomic bombs, later discredited, right through to the beginning of the Vietnam war, the Gulf of Tonkin. So we had years of misery and devastation in Vietnam built on a lie. When are we going to understand this? When are we going to understand there is an historical pattern, and we are seeing that played out now almost through the propaganda that's presented as news?

"... I've never known a time when so-called mainstream – surely a satirical term – has been so integrated into a propaganda barrage. That propaganda campaign, at the moment pointed right against Russia, suggests to me that it's the beginning of a kind of another march on Russia."

In the Syrian conflict, he said, "the whole point" is to take Syria from the Russians. "If you read the documents, you go back and read the declassified MI6 dispatches from Syria, they've been trying to do this since the 1950s."

To anyone who follows the discussions about Syria on social media, this is familiar stuff: the Syrian regime and its ally, Russia, are victims of western aggression; western governments lie about what is happening and mainstream media lap up their lies. The only hoping of saving us from mass deception, allegedly, comes from Russian state media, a few obscure websites and a handful of heroic journalists who become sidelined as soon as they try to reveal the truth.

Through endless repetition rather than evidence-based argument, ideas such as these have become a routine feature of online discourse and at times they dominate it. It's difficult to be sure how far they reflect a real balance of opinion among social media users – bots and fake accounts can easily give a false picture – but they are certainly very noticeable and when members of parliament are fooled by them it's time to start worrying.

While much of this "alternative" theorising is ideologically motivated, it clearly has a receptive audience among people who don't necessarily see themselves as political. At one level its popularity may be seen as a further reflection of the generalised discontent that led to Donald Trump's election in the United States and the Brexit vote in Britain.

Another reason for the appeal of such ideas is their extreme simplicity of their explanations. In a confusing world they satisfy a natural human desire for clarity; right or wrong, they avoid the need to grapple with complexity. Buying into them can also bring psychological rewards for those who adopt them – a gratifying sense of "being in the know" while others thoughtlessly follow the crowd.

The implications of this reach well beyond the Syrian conflict. The same techniques used in connection with Syria are applicable to all sorts of thrutherism – from 9/11 and the Salisbury poisoning to denial of global warming – and their effect is pernicious.

Trutherism, by its nature, rejects mainstream narratives and makes a virtue of doing so. It claims to be asking searching questions and encouraging critical thinking – and in principle there is nothing wrong with that. The grand deception over Iraq's weapons of mass destruction is a prime example of why mainstream narratives should be scrutinised. Proper scrutiny, though, means weighing up the balance of evidence. It also means making judgments about the strength and relevance of various bits of evidence, and the way that is done marks a dividing line between honest questioning and trutherism.

In order to make their case, truthers are obliged to reject much of the available evidence – not because they have looked at it carefully and decided it is weak or unreliable but because it doesn't point in the desired direction. They are more interested in discrediting mainstream narratives than in having knowledgeable discussions.

The result is that their "alternative" ideas about world events also come packaged with an "alternative" approach to evidence which inhibits informed debate. This is where the idea of lying governments and colluding media becomes very useful. It allows evidence from official or mainstream sources to be dismissed almost at will on the grounds that it comes from tainted sources, thus avoiding any need to seriously evaluate its content.

"I don't think anything [prime minister] Theresa May says is to be believed, frankly," Pilger told RT viewers in his interview. If only that were true, life would be a lot simpler. But much as governments may lie they don't necessarily lie all the time. It's important, therefore, neither to accept their words without question nor dismiss them out of hand, but to try to work out when they are telling the truth and when they are not.

That, though, is not the truthers' purpose. Instead of gathering evidence and building a narrative around it, they start with a narrative and look for evidence to support it. One example of this in connection with Syria is the "regime-change" meme – the idea that western powers were already plotting to overthrow Assad before the conflict broke out in 2011. It's a key part of the regime's propaganda message which blames the conflict on western machinations rather than decades of dictatorship.

However, a broad view of Syria's international relations since Bashar al-Assad came to power shows that it's nonsense. The calls from western leaders for Assad to step down came after the conflict had begun, as a reaction to its brutality in the early stages of the uprising. 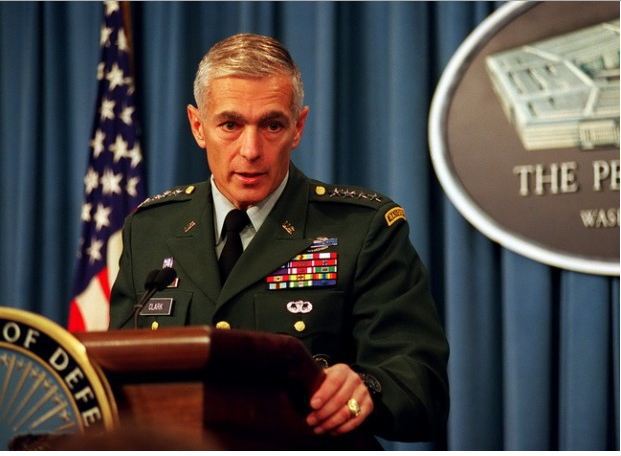 While denying this overall picture, truthers latch on to a document from 1983 and another from 2006 (neither of which actually proposes regime change) and cite the ever-popular Wesley Clark anecdote. A few weeks after 9/11, according to the story, retired general Clark visited a former colleague who told him of a single-page memo circulating in the Defense Department which proposed to "take out seven countries in five years" – among them Syria. There's no evidence that this ever became official US policy and Clark, who had not read the document himself, later said it wasn't necessarily a plan but "maybe it was a think piece".

This is the kind of "evidence" that gets posted repeatedly on social media whenever the topic of regime change comes up, and it keeps re-surfacing even after it has been shown to be wrong, questionable, or even irrelevant.

March of the truth-tellers

Casual attitudes towards evidence also open the door to "alternative" views of what constitutes "good" journalism. Of course, there are a lot of things wrong with mainstream media but that doesn't mean mainstream sources should automatically be disbelieved. Nor does it mean that news from "alternative" sources is necessarily more credible.

The onus on the public is to treat media reports – from whatever source – like the purchase of a used car: examine them carefully before making up your mind. Doing that properly requires some effort. It means weighing up the evidence, looking at what others are saying on the same topic and applying basic critical skills that – hopefully – will have been learned in school.

There's really no way of avoiding this if you don't want to be misled but the truthers offer a short cut by recommending a small number of journalists  – "honourable exceptions" (in Pilger's words) to the general media malaise – whose work is supposedly beyond question.

These designated truth-tellers are hailed on social media for the quality of their journalism though the main thing they have in common is that they say what the truthers want to hear. They include Pilger himself, along with the factually-challenged Robert Fisk and the American investigative reporter Seymour Hersh. Pilger told RT viewers:

"We have Seymour Hersh now, who can't be published in his own country. He has to be published in Germany. Probably the greatest investigative reporter in the world, Hersh last year made his own reporting – his own investigation made mockery of these so-called chemical attacks."

While Pilger implies that Hersh has been penalised for stepping out of line politically, it doesn't seem to have occurred to him that there might be other reasons for this difficulty in getting published. Two of Hersh's articles about chemical attacks in Syria were seriously flawed (here and here).

Pilger has also paid tribute to Vanessa Beeley who writes misleading articles about Syria for 21st Century Wire, a conspiracy theory website, and (among other things) claims BBC footage of people burned by an incendiary weapon in Syria was "nothing more than war theatre orchestrated by the BBC in order ratchet up UK military intervention".

In a recent email posted on the internet, Pilger described Beeley as a fine journalist who "has my unqualified endorsement". 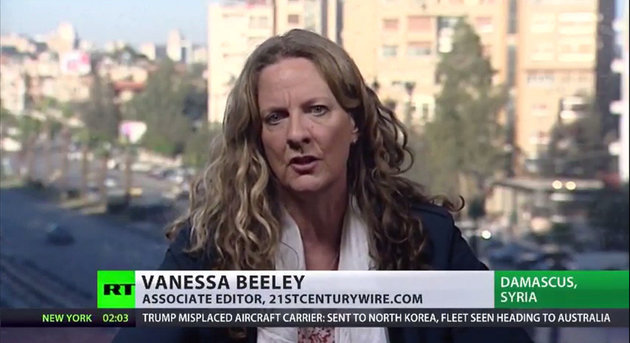