Skin decoration in the Arab world is practised mostly by women and takes the form of designs on hands and feet using henna, which fades away over a period of days or weeks. Increasingly, street artists in resorts such as Marrakesh and Sharm el-Sheikh also provide henna decoration of varying quality for visiting tourists of both sexes.

Henna comes from the leaves of a shrub or small tree called Lawsonia inermis and is usually sold in Arab markets in powdered form. For use, the powder is mixed into a paste, applied to the skin and left to try. When the dried paste is removed a brown stain is left behind on the skin.

Designs can be applied freehand (for example, with a small syringe) or using stencils bought from the markets.

Natural henna should not be confused with a substance known as "black henna" which can cause serious ill-effects.

Although tattoos can be seen in many Arab countries, tattooing is not a particularly Arab tradition and strict Muslims disapprove of it (click here for an explanation).

Tattooing is nevertheless common among the Berbers of north Africa, where small designs with symbolic meaning are used (mainly by women). Egyptian Christians often have a cross tattooed on their hand or wrist. These designs tend to be very simple and crudely done. There is no Arab tradition of elaborate tattooing as seen, for example, among Maoris and Pacific islanders.

Nevertheless, tattoos in Arabic and other non-Roman scripts have become popular among westerners and if you decide to get an Arabic tattoo it's advisable to check beforehand that the script is used correctly and that the Arabic says what you meant it to say. The best way of doing that is to check it with native Arabic speakers – and preferably more than one.

There are plenty of examples to be found on the internet of Arabic tattoos gone wrong – a lot of them designed by people who have simply copied individual Arabic letters with no idea of how to combine them into words. Letter shapes can vary depending on their position in a word (see al-bab's section on the Arabic alphabet). 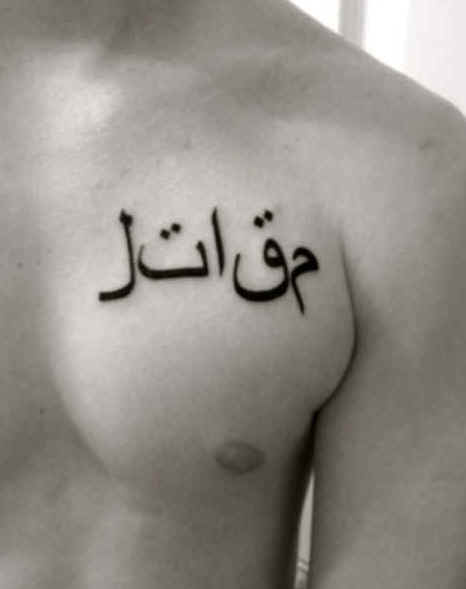 The picture above shows a very common mistake – often caused by computers which have not been set up properly for handling Arabic text. The tattoo is meant to say "muqatil" (fighter) but the letters have not been joined together to form a word and the result.

It's also worth checking whether the Arabic version of a name has some unintended meaning. For example, transliterating "Polly" produces an Arabic word meaning "urinary".

Tattoos based on phrases – lines from songs or poems, proverbs, favourite sayings or idiomatic expressions – which have been translated into Arabic have even more potential to go wrong. Literal translations of the sort that Google Translate produces are quite likely to be Arabic gobbledegook.

For many people, tattoos using Arabic calligraphy have more visual appeal than standard Arabic text lettering. There are various calligraphic styles and examples of these can be found on al-bab's calligraphy page.

It is generally not a good idea to make tattoos out of any existing works of Arabic calligraphy that happen to take your fancy. Not only is this unfair to the artists, but the designs usually contain religious quotations and their use as tattoos, especially by non-Muslims, could be considered offensive.

For religious reasons some calligraphers (e.g. Mamoun Sakkal) refuse to design tattoos, but there are others who will happily provide custom-made designs for tattoo purposes. One of them is Josh Berer, and more can be found on the internet.

Again, if you decide to enlist a calligrapher, it's worth checking out opinions about the quality of their work.