A "non-profit" organisation which claimed to be campaigning on behalf of exploited construction workers in Qatar has been exposed as a fake.

Purportedly operating from France, where it used a false address, "Voiceless Victims" contacted several genuine organisations concerned about employment rights in Qatar, seeking to collaborate with them. It also invited migrant workers, their families and others "to share your personal stories with us" about abuses in Qatar. "You can do so by sending us a private message to our inbox," it said.

Voiceless Victims described itself as "a group of volunteers principally composed of graduate students in the field of social sciences and professionals who are devoted to humanitarian causes" and made some efforts to show credentials as a campaigning organisation.

It posted a 73-second video on Youtube (above) with subtitles which said "By the time the World Cup is actually held in 2022 more than 4,000 workers will die in Qatar" and "More than 62 workers will die for each game played during the 2022 World Cup".

The video seems to have been professionally produced but other attempts to build trust were more amateurish. Its website sought to give the impression Voiceless Victims was working on rights issues beyond Qatar but the content had almost no substance. One item, for example, talked in extremely vague terms about poor children "in Africa". Its postings on Twitter were also mostly non-specific: "Have a heart", "Lend a hand", "Stand out and make a difference".

Amnesty International started to become suspicious when an email received from Voiceless Victims triggered a computer alert. The email contained links to a website previously associated with cyber-attacks and Amnesty's technical team suspected this was a first step towards gathering information about the workings of their computer system.

Further investigation by Amnesty established that Voiceless Victims was a bogus organisation – and it has now disappeared. Its website has also been deleted, though archived fragments can be found here.

Earlier this week Amnesty published a detailed account of its findings. It also shared its research with Le Monde newspaper which has a report in French.

This still leaves two big unanswered questions. Who was really behind  Voiceless Victims? And what was it trying to achieve?

Another article about the affair, by Thomas Fox-Brewster for Forbes magazine, provides a tantalising clue which suggests Voiceless Victims was not being run from France but from the Gulf. Over a nine-month period, almost all of its weekly Twitter activity took place between Sunday and Thursday; there were very few tweets posted on Fridays and Saturdays – which corresponds with the weekend in the Gulf.

A further point that may (or may not) be relevant is the recent history of antagonism between the United Arab Emirates and Qatar. In that context it's worth recalling the rise and fall of the Norwegian-based Global Network for Rights and Development (GNRD), a strange organisation which was funded almost entirely from the UAE and presented a glowing picture of human rights there. The activities of GNRD first attracted public attention when two of its workers were arrested in Qatar while investigating the conditions of migrant workers.

There are some similarities between GNRD and Voiceless Victims. Both sought to gain acceptance by associating themselves with respectable organisations. GNRD's founder-president, Loai Deeb, also had a penchant for fakery but, unlike Voiceless Victims, GNRD really existed: it had real offices and real employees.

While it's conceivable that Voiceless Victims was another Emirati-sponsored operation, there are several reasons for doubt. If the aim was simply to spread propaganda against Qatar, why set up a fake organisation to do it? And how would gathering information about Amnesty International's computer system assist in that?

From what is known about Voiceless Victims, it looks more like an intelligence operation than a propaganda operation – an attempt to compile information about Qatar's critics and their plans. Viewed in that light, the invitation for migrant workers to send stories about abuses in Qatar looks especially sinister since it could be used to identify and suppress local activists.

If so, the obvious suspect is not the UAE but Qatar itself. Of course, setting up an effective intelligence operation of that kind would involve criticising Qatar publicly but Qatar was already being widely criticised over the World Cup and its treatment of migrant workers, so further criticisms from Voiceless Victims were unlikely to make much difference, and information gathered in the process might prove invaluable.

A further point to note is that alongside its criticisms of Qatar, Voiceless Victims also posted on its website some apparently positive (but false) information about steps the Qatari government was taking to improve workers' conditions.

Despite these suspicions, however, the Qatari government denies any involvement. In a letter to Amnesty, the foreign ministry said:

“After double-checking with all relevant government ministries and entities, we can categorically state that the Government of the State of Qatar has nothing whatsoever to do with the creation or operation of ‘Voiceless Victims’.”

So, the mystery continues. Any thoughts or further information from readers would be appreciated. 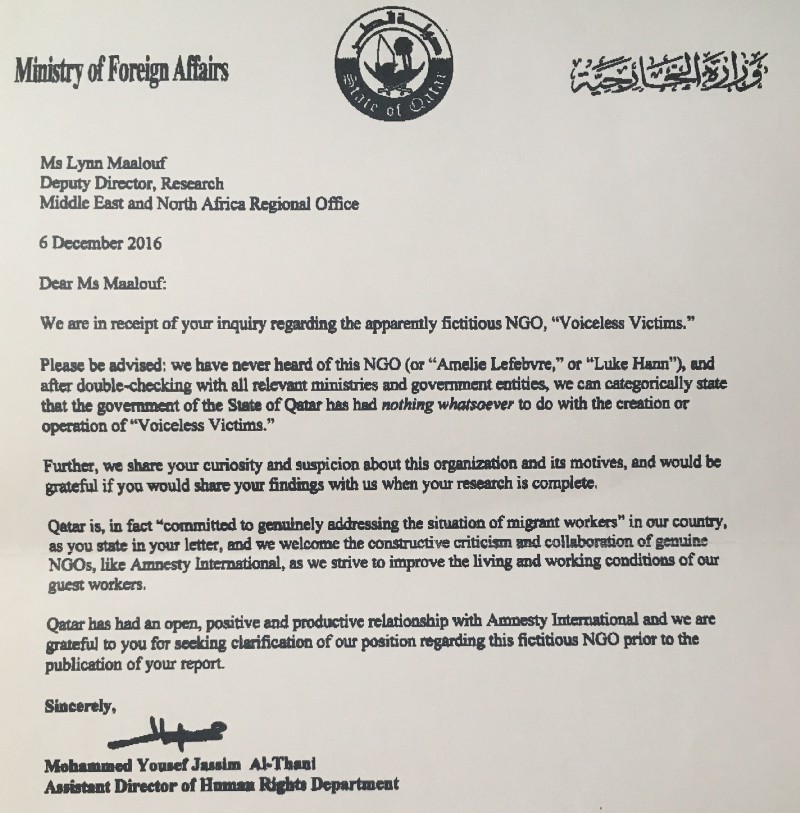