Introduction
PART ONE: Roads to disbelief
1: Denying God, subverting society
2: Atheism in Arab history
3: God’s own book
4: Fear of disbelief
5: Losing their religion
6: Atheism, gender and sexuality
7: Godless on the internet
PART TWO: Protecting the faith
8: The privileges of religion
9: Once a Muslim, always a Muslim
10: The right to offend, shock and disturb
11: A taste of freedom?
12: Atheism and Islamophobia
13: A question of tolerance 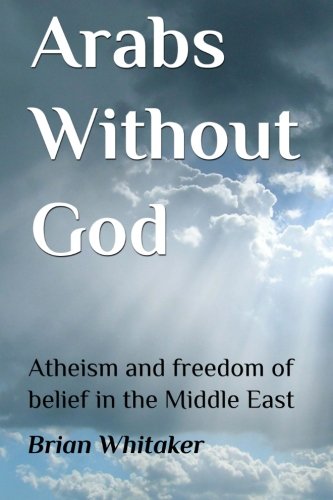 ARABS, in popular imagination, are assumed to be Muslims and potential religious fanatics. The reality is a lot more complex. Islam is far from monolithic and has many strands: Sunni, Shia, Salafi, Wahhabi, Zaidi, Sufi, Alawi, Ibadi, Isma’ili and others. Nor are Arabs necessarily Muslims. There are millions of Arab Christians, plus smaller numbers of Druze, Yazidis, Mandaeans and Jews.

Added to this mix is a growing number of Arabs – mainly young – who openly declare themselves to be atheists, agnostics or sceptics. Non-believers have probably always existed in the Middle East, mostly out of sight, but now they have begun to find a voice. Social media have provided them with the tools to express themselves and the “Arab Spring” uprisings that began in 2010 emboldened some of them to speak out.

In countries where religion permeates most aspects of daily life, publicly challenging belief shocks families, society and governments. Many have been imprisoned merely for expressing their thoughts, others have been forced into exile and some threatened with execution. Many more keep their thoughts to themselves, for fear of the reaction from family, friends and employers.

For an established order that favours orthodoxy and conformity and is unaccustomed to questioning, these dissenting voices are a problem – especially for autocratic governments that base their claims to legitimacy on religious credentials. Regardless of attempts at suppression, though, what some see as the “problem” of disbelief is unlikely to go away; more likely, it will grow.

Thanks to the internet, along with satellite television and foreign travel, young Arabs today are far more aware of the outside world than previous generations and, when they hold up their own countries to the mirror, many dislike what they see. Rejecting religion is one response to that but it is also part of broader demands for political and social change. The inclusion of religion in this wave of disaffection was almost inevitable, since religion in the Arab countries – far from being a personal, private matter – has become heavily politicised and is responsible for many of the social restrictions that cause so much frustration, especially among the youth.

It is not the purpose of this book to make a case for atheism or to single out Islam among religions for particular criticism, though Islam happens to be the dominant faith in the region. Rather, the purpose is to look at non-belief as a social phenomenon – its causes and its consequences – and to argue for the right of non-believers to be treated as normal human beings.

Public discourse in the Arab countries has opened up considerably since the 1990s. Many of the old taboos have been broken and things can be said in public now that would have been unimaginable only a decade or two ago. Despite that, religion is still generally treated as sacrosanct: challenging it is the biggest and most untouchable of the remaining taboos.

This, in turn, raises important questions about how best to press for change. Some of the non-believers interviewed for this book could be described as activists who openly question and confront religion in all its forms (as is their right). Others simply want a quiet life; they see no need to advertise their disbelief but resent being forced to comply with rules imposed by believers. Both of these approaches are fraught with difficulties, however, and may also bring their adherents into conflict with the law.

The result is that Arab non-believers face two separate but related struggles. One is their dispute with religion itself; the other is with societies and governments that refuse to  recognise their disbelief. This broader struggle for personal rights – freedom of thought, freedom of expression, freedom of conscience, and so on – is one that they share with millions of religious Arabs too, especially religious minorities. Anyone who does not conform to whatever happens to be the local religious orthodoxy is liable to fall victim to blasphemy and apostasy laws or sectarian prejudices. The irony of this is that while believers and non-believers are on opposite sides where religious ideas are concerned they may also find themselves on the same side in the struggle for freedom of belief. A substantial part of the discussion in this book is therefore concerned with broader questions of religious liberty which affect believers and non-believers alike.

Nevertheless, minority religious beliefs tend to be more accepted than atheism. There is some recognition of religious diversity, at least among the monotheistic faiths, even if prejudice and discrimination persist. Outright disbelief in God, on the other hand, tends to be greeted with general abhorrence. In lands where religion holds sway, the treatment of non-believers thus becomes the ultimate test: when an atheist can be accepted and respected as a normal human being, liberty will truly have arrived.

Arabs Without God is available in paperback from Amazon (US) or Amazon (UK). It is also available in Arabic (online, free of charge) and in Italian under the title Arabi Senza Dio.

Comments about Arabs Without God

Reviews of Arabs Without God

New Humanist – Interview with the author of Arabs Without God, 25 November 2014

Interview with author – Majalla al-Mulhidin al-Arab, issue 36, November 2015. (The interview was published in Arabic but an English version can be found here.)