The Crater residence of Captain S B Haines

This article was published in the British Yemeni Society's journal, 1998

Mrs Hywel-Jones lived in Aden in the mid- 1960s and has made several visits to Yemen during the past few years. She is a Council member of the British Association for Cemeteries in South Asia (BA CSA), of the Royal Society for Asian Affairs and of the Society for Arabian Studies.

Cruise ships are starting to call at Aden again, and tourists are flying or driving to Aden as part of their tours of Yemen. The old guide books provided by P&O liners and Murray’s do not list much of what there is to see and do in Aden; they concentrate on where to find the post office, duty free shopping, sports facilities, the gardens at Shaikh Othman, the ‘tanks’ in Crater, interspersing such advice with snippets of local history and legend. They mention little or nothing of the legacy of 130 years of occupation (1839-1967) by the British and other Europeans.

Historically, Aden town in Crater had been a thriving entrepot of trade with Africa, India and China. But when Captain Stafford Bettesworth Haines seized it on 19 January 1839 on behalf of the East India Company, for use as a coaling station for ships steaming to and from India, it was a derelict village of some 600 inhabitants — Arabs, Somalis, Jews and Indians — housed for the most part in huts of reed matting erected among ruins recalling a vanished era of wealth and prosperity. For Queen Victoria, the capture of Aden was the first addition to the British Empire since her accession to the throne in 1837. Haines’s knowledge of Aden’s history made him optimistic about the possibilities for its future. ‘Scarcely two centuries and a half ago’, he wrote, ‘this city ranked among the foremost of the commercial marts of the East the superiority of Aden is in its excellent harbours, both to the East and to the West; and the importance of such a station, offering as it does a secure shelter for shipping, an almost impregnable fortress, and an easy access to the rich provinces of Hadhramaut and Yemen is too evident to require to be insisted upon’.

Appointed Political Agent by the Bombay Presidency of the East India Company Haines served in this capacity (without leave) for the next fifteen years, presiding over Aden’s rapid expansion as a fortress (with a garrison of 2-3,000 Indian sepoys) and as a port which by the early 1850s boasted a population of some 20,000. Haines’s deep personal commitment to the revival of Aden’s prosperity, despite the parsimony and vacillation of his political masters, ultimately led to his tragic imprisonment in Bombay for debt and to his death (aged only 58) in 1860. But in South West Arabia his name lived on and for decades local tribesmen referred to the inhabitants of Aden as Awlad Haines (‘Haines’s children’).

The house initially occupied by Haines in Crater is said to have been rented from a local Hindu merchant and to have been situated near a Hindu temple. In his book Kings of Arabia (1923) H.F. Jacob mentions, evidently quoting from Haines’s own description, that it was ‘dilapidated, and parts fell down on the concussion of the 8 p.m. gun. There was scanty accommodation in his house for guests and he had to place three to four gentlemen in one room, nor had he a room fit for dining a small party; and so he put up a small thatched building close by with a dining-room and two small sleeping- or sitting-rooms. The largest room in his residence was only 11 ft x 11 ft, and it was his dining-room, and the servants [had] to pass through the office to get to it, which [was] very inconvenient, as both money and all records [were] kept there.’ Eleven feet was about the length of the palm trunks locally used for ceilings. In Sultans of Aden (1968) Gordon Waterfield describes the building as ‘extremely hot and the rooms inconveniently small’. 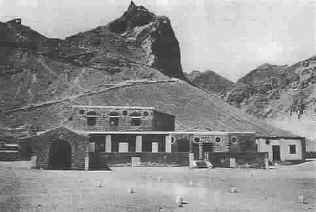 A map of 1875 places the ‘Residency’ in Crater near the Crater Pass. And one of 1877 marks it in the Biggari (later called Khusaf) valley, south west of the Pass. A map dated 1917 calls the building ‘The Old Residency’. In Jacob’s book there is a photograph (right), possibly taken some time before he left Aden in 1920, of a long terraced stone building with a roofed gateway and verandah, and with round apertures in the walls above the doors and windows for additional ventilation. Jacob describes this as ‘Haines’ Residence in Crater, now the Arab Guest House’.

During a visit to Aden in February 1998, I set out to look for Haines’s house with the aid of the old maps and some others dating from 1965, together with Jacob’s photograph. The western end of Khusaf valley is today an area of squatters’ shacks and it was impossible to carry out a detailed search without intruding into people’s living quarters. However, using the alignment of the rocky outline of the hills in the background of Jacob’s photograph, we found parts of a stone structure similar to that depicted in the photograph although partly hidden by concrete blocks, corrugated iron and bits of packing crate (right). On returning to London I learned that from 1948 until about 1954 Haines’s house became the headquarters of the British Agency, Western Aden Protectorate; photographs of the building taken in the late 1940s show it virtually unchanged since Jacob’s day

Haines eventually built himself a new, more suitable residence at Ras Tarshyne overlooking ‘Sapper’ Bay and ‘Telegraph’ Bay and with views across to ‘Little Aden’. This was a more comfortable house and his wife and child joined him there from Bombay I am told that in the India Office Library there is a watercolour of them standing on the wooden verandah of this house. In the mid-1960s when I lived in Aden, Government House as it was then called was a large, white, very modern building commanding the same spectacular views from Ras Tarshyne.

Although the area in Crater which I have identified as the site of Captain Haines’s house is not easily accessible to (nor suitable for) tourists, there are many other places to visit: Sirah Island, for example, with its fortifications and cannon, and the fortifications around Crater which were strengthened and rebuilt by Lieutenant John Western before his death in 1840.Western’s lone grave lies in Crater, below the Legco Building (formerly the Garrison Church), and is in danger of being bulldozed, as has happened to the other graves in that first European Cemetery Ion Keith-Falconer (1856-1887), the young Scottish orientalist and missionary, who founded the Mission Hospital in Shaikh Othman just a few months before dying of malarial fever, is buried in Holkat Bay cemetery. He lived for a time in Crater, near Crater Pass, and the site of his house can be seen in old postcards. Other places to visit are the historic Aidrous Mosque in Crater, the Museum on Front Bay where the British landed in 1839, and ‘Telegraph’ Bay where the telegraph cable linking London and Bombay was brought ashore in 1870. Traces of the Grand Hotel de L’Europe can be seen in the Crescent not far from the famous landing stage known as the Prince of Wales Pier (where all regimental and other plaques which once lined the walls have disappeared). The statue of Queen Victoria which also once stood in the Crescent is now lodged in the garden of the British Council offices in Khormaksar. Nothing is left of Aden’s old coal bunkers, but dhows are still repaired on Slave Island and a few camels are still employed in the haulage business in Crater!

In Crater and Steamer Point a good deal of architecture from the colonial period survives — reflecting Indo-Arab influences and the exigencies of living in a hot, humid climate in the days before electricity. Meanwhile, the European cemeteries in Crater, Holkat Bay Barrack Hill, Ma’alla and Silent Valley afford fascinating testimony of the many different capacities in which the expatriate community lived and served in Aden during its transformation from a derelict village to a city of major commercial and strategic importance, with a population, by the time of independence in 1967, of nearly a quarter of a million.