The "final and permanent" border agreement between Yemen and Saudi Arabia is being hailed as a milestone in relations between the two neighbours. But there is still work to be done. 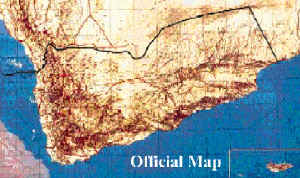 THE BORDER treaty between Yemen and Saudi Arabia, signed on June 12, describes itself as "final and permanent". It is not actually final because, as the text shows, a large portion of the border is still to be agreed - though that should not detract from what has been achieved. Yemeni leaders are particularly delighted, claiming that it is as important a landmark as the unification of north and south Yemen 10 years ago.

There are few surprises in the treaty: the frontier it describes could probably have been agreed, given the right conditions, at any time during the last decade. The significant point is that conditions were not right then, but they are now - and the changes seem to have occurred mainly on the Saudi side.

The Saudis have long regarded Yemen as a problem, whether on account of its republicanism, its larger population, its democratisation, or the unruly ways of some of its people. The unification of Yemen worried them, and they did their best to ensure that it would not succeed.

But Saudi Arabia is changing. With King Fahd’s health declining, Crown Prince Abdullah is now in day-to-day command and his influence is ever-more apparent. In May, Abdullah took the unprecedented step of attending the celebrations in Sana’a to mark the tenth anniversary of Yemeni unification, the event that the kingdom had done so much in the past to oppose.

There could be no clearer acknowledgement that previous Saudi policies towards Yemen had failed. It was a signal that, instead of regarding Yemen as a problem, the Saudis were prepared to regard it as a partner - at least for a while, to see how Yemen would respond.

Abdullah also appears to have taken a decision to tidy up the kingdom’s borders once and for all; the dispute with Yemen was the biggest, but not the only one. He has since turned his attention to the dispute with Kuwait.

THE TREATY divides the Yemeni-Saudi border into three parts. The first part is the area originally covered by the 1934 Treaty of Ta’if. This runs from the Red Sea coast to Jabal al-Thar, the "moving mountain" whose identity had been hotly disputed. It is now fixed in position with a grid reference.

The main problem here has been relating the line described in the Ta’if treaty to actual points on the ground. Both sides have now agreed to employ a specialist company to survey the line and erect marker columns.

There is also a continuing problem in relating ancient tribal boundaries and grazing rights to the Ta’if line. The Wa’ila tribe, for instance, reject the official border on the grounds that they have a 241-year-old document demarcating their own tribal boundary with the Yam tribe. The new agreement provides for amendments to the Ta’if line where the border cuts through villages, and allows cross-border grazing (with special permits) for shepherds.

One concern is that this area is also a traditional smuggling route, and Appendix 4 of the agreement seeks to prevent well-armed "shepherds" driving across the frontier in convoys of trucks stuffed full of consumer goods.

The second part of the land border - the longest section - runs from Jabal al-Thar to the frontier with Oman but its precise legal status under the treaty is puzzling. The treaty says it has not yet been defined but "the two contracting parties have agreed to demarcate this part in an amicable way".

The treaty does, however, define the starting and finishing points, and refers to Appendix 2, which is described as "tables defining distances of the border line". The tables are not, in fact, "distances" but a set of 17 co-ordinates:

Joining up these co-ordinates would produce a border very similar to the "Como Line" which was provisionally agreed in 1997 when President Ali Abdullah Salih met Prince Sultan bin Abd al-Aziz in Italy (see article in Middle East International).

What seems to have happened is that the two sides have agreed on a number of fixed points but not the line between them. This may be an attempt to avoid the problems that can arise when borders are drawn in straight lines on a map without reference to the local geography. Once the independent survey team have done their work it will be easier to see whether any adjustments should be made in the spaces between the fixed points.

It is worth noting that the provisional border in this area is well to the north of borders claimed by the Saudis between the 1930s and 1950s. Part of it appears to follow the Riyadh Line (offered by the British to Ibn Saud in 1935) but it dips south in the middle to avoid the Saudi city of al-Wadi'a.

The third part of the border is the maritime frontier. The repeated and very precise references to its starting point on the coast - the quay of Ra’s al-Ma’uj Shami, Radif Qarad outlet (latitude 16, 24, 14, 8 north, and longitude 42, 46, 19, 7 east) - are obviously intended to leave no room for doubt … a sign that this has previously been contested.

Yemen had earlier pointed out that the Ta’if line turned north-west before reaching the sea and regarded it as an indication that the maritime border should continue in the same direction. The Saudis appear to have won that argument, because the newly-agreed maritime line starts by heading due west.

The 1934 Ta’if treaty had a side-letter granting special privileges for Yemenis to work in Saudi Arabia. This effectively ceased in 1990 when the Saudis took offence at Yemen’s attitude to the Iraqi invasion of Kuwait.

Yemen has long maintained that the letter is an integral part of the Ta’if treaty. Although the Ta’if treaty has been incorporated into the new agreement, the status of the letter remains unclear. But it is unlikely that the Saudis will want to revert to the previous situation, which gave Yemeni workers more rights in the kingdom than other Arabs.

The new agreement provides for negotiations in the event that "shared natural wealth" (e.g. oil) is discovered on the border. This is a minimal commitment: it does not require either side to do anything more than negotiate, and it does not prevent either side from exploiting shared mineral wealth unilaterally. That is not necessarily a problem, but it will only work if there is mutual trust and goodwill.

The new treaty also incorporates the 1995 Memorandum of Understanding which contains several important clauses not directly related to the border. One of these is the promotion of economic, commercial and cultural relations between the two countries. There are suggestions in the Yemeni press that Saudi Arabia will now support the country’s application to join the Gulf Co-operation Council.

Another key clause from the memorandum incorporated in the treaty says: "Both countries confirm existing obligations whereby their territories will not be used as bases or centres of aggression against the other: nor will they be used for political, military or propaganda purposes against the other party."

This is easily the most contentious part of the agreement and the extent of its observance will determine whether relations have really changed. Both sides have long accused each other of meddling in their internal affairs.

If the interference does stop, several hundred politicians, tribal leaders and officials in Yemen, who have been accustomed to receiving loyalty payments from the kingdom, will see their incomes cut. The future of some Yemeni opposition groups backed by Saudi Arabia, and of those southern Yemeni leaders who took refuge in the kingdom after the 1994 war, looks uncertain, too.

The non-interference clause also extends to "propaganda" - which has sometimes been interpreted as meaning that neither side should allow its media to attack the other. If that interpretation prevails, the effect will be to enshrine a permanent restriction of press freedom in an international treaty.