Attack on the USS Cole 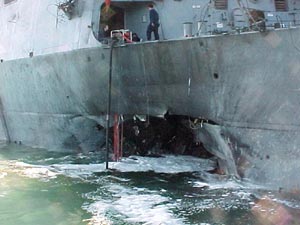 SEVENTEEN people died and 39 were injured in an attack on the American guided missile destroyer, USS Cole, in Aden harbour, Yemen, on October 12, 2000.

While the ship was refuelling offshore, a small craft with two men on board - presumed to be suicide bombers - approached the ship and exploded. The small boat is believed to have been packed with 400-700 pounds of explosives, and the blast blew a 40-foot hole in the side of the USS Cole.

In the months after the bombing there was growing evidence that the attack had been orchestrated by Usama bin Laden's al-Qa'ida network.

The reports on these pages were compiled by al-bab.com in the aftermath of the bombing and during the early stages of the investigation.

Jan 13, 2001: Yemen and the United States have disagreed about whether three of the Cole bombing suspects should be tried. Report: CNN/AP

Jan 12: Yemen is seeking information about a clown-like "Charlie Chaplin" character who boarded USS Cole as it was passing through the Suez canal before the bombing. Reports: ABC; AP

Jan 11: A further five people - three Yemenis and two Egyptians - have been arrested in connection with the Cole bombing investigation. Report: ABC/Reuters

Jan 10: A Yemeni lawyers says it will be difficult to ensure a fair trial for suspects. Report: AP

Jan 8: Despite security lapses, the commander of the USS Cole will not be disciplined. Report: ABC

Jan 2: A Pentagon commission has found flaws in US security before the attack. Report: Reuters

Dec 23, 2000: Yemen is likely to put at least two more people on trial for the bombing of the USS Cole, bringing the number of accused to eight. Report: AP/Dow Jones

Dec 12: The British embassy in Sana'a was bombed by "the same elements" who attacked USS Cole a day earlier, Yemen's interior minister said. He added that one supporter of Islamic Jihad is in custody in connection with the embassy attack. Full story: Reuters. Embassy bomb report: Yemen Gateway.

Dec 10: President Salih said Yemen would not allow the extradition of  suspects to the United States. Report: Reuters

Dec 9: The crew of the USS Cole failed to protect their ship from attack, an internal naval investigation suggests. Fire hoses were not "at the ready" to keep small craft away, there was no coordinated effort to track small boats nearby, and the Cole's own small boat was not ready for launching to investigate the approach of any suspicious craft. Reports: ABC, Reuters, AP

Dec 6: The US reportedly wants to extradite Raed Hijazi, a former Boston taxi driver, for trial in connection with the Cole bombing. Hijazi, an American citizen of Palestinian origin, is under sentence of death in Jordan. Reports: WCVB/Yahoo, AP

Dec 4: Yemen's foreign minister says the US itself bears some responsibility for helping to create terrorist organisations. Report: AP

Dec 1: The estimated cost of repairing the USS Cole has risen to $240 million. Report: AP

Nov 29: Yemen and the US reached a deal on how to proceed with the USS Cole investigation. Reports: New York Times, Reuters.

Nov 29: When the suspects go on trial, attention will focus on Yemen's justice system. Report: AP

Nov 24: A sketch of one of the suicide bombers resembles a man wanted in connection with the 1998 attacks on US embassies in Kenya and Tanzania. Report: ABC

Nov 22: The FBI carry out DNA tests on "confetti-sized" remains of the two bombers to confirm their identity. Report: CNN

Nov 20: Yemen has detained six men who are alleged to be key accomplices in the bombing. Report: Washington Post

Nov 20: One of the bombing suspects is said to have been involved in the Nairobi embassy blast. Report: Yemen Times

Nov 17: Yemen's prime minister says one of the bombers has been identified as a Yemeni born in Hadhramaut and there are solid leads to the identity of the second bomber, who is also believed to be Yemeni. Report: Washington Post

Nov 17: More FBI agents in Yemen are to return to the United States because of the progress made in the investigation. Report:  AP

Nov 14: Sailors guarding the USS Cole when it was bombed did not have ammunition in their weapons and were instructed not to shoot unless fired upon. Report: AP

Nov 12: A suspect says the attack on USS Cole was planned by a man in the United Arab Emirates, and that the boat used in the attack was purchased there. But Egyptian sources say the boat was locally made and powered by a tractor engine. Report: AP/Los Angeles Times

Nov 12: The US ambassador in Sana'a is said to be in dispute with the FBI over relations with Yemen. Report: UPI

Piecing together the terrorist jigsaw
The Guardian, 15 Oct 2001

Attack on the USS Cole