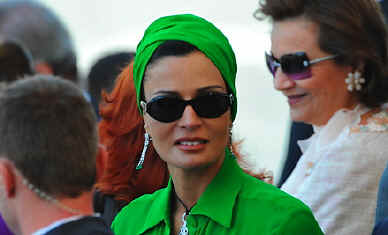 Sheikha Moza bint Nasser, wife of the emir of Qatar, is famous for her good works. In the eyes of many, she's the model of a modern, enlightened Arab woman.

Sheikha Moza is the driving force behind Qatar's remarkable Education City project, she is founder and chair of the Arab Democracy Foundation, she has served as a special envoy for Unesco, and she sits on the Board of Overseers for Weill Cornell Medical College in the United States. She is also an Honorary Dame of the British Empire, a member of the Académie des Beaux-Arts in France and holder of the Grand Cross of the Order of Merit of the Italian Republic.

But I began to have doubts about Sheikha Moza's enlightenment a few years ago, when she hosted a conference in Qatar which brought together some of the world's most reactionary religious elements – Mormons and Catholics as well as Muslims – to "defend the family". The family is in peril, she warned in her opening speech, because of attempts to "redefine the concept of family in a manner contrary to religious precepts".

Now, another of the Sheikha's more dubious charitable enterprises has come to light. It's al-Aween, which she established as Qatar's first centre to combat "deviation from acceptable social behaviour" and "provide specialised treatment for all kinds of behavioural deviation that require thorough intervention and treatment by specialists".

Alongside violence, bullying and drug abuse, al-Aween also applies its specialised "intervention and treatment" to "internet addiction" and homosexuality.

"... seeks to raise awareness and carry out rehabilitation within the community to reform people. It endeavours to preserve order and establish a cohesive society based on values that reflect the desired image of the community, protect future generations from deviation and corruption, defend against intrusive ideologies, and place an emphasis on identity and authenticity of Qatari society."

Al-Aween, the website continues, "is a significant milestone strengthening family ties and working to promote family security. It identifies and emphasises gender roles in society, in order for the stability of all families."

Maintaining traditional gender roles and treating "sexual identity perturbation" seems to be a particular concern of Dr Dalia al-Moumen, a psychiatric consultant whose lectures for al-Aween have dealt with the "problem" of men with long hair and girls wearing trousers – and the "negative impacts" of that on mental health, society, religion and the family.

Meanwhile, also on al-Aween's website, Dr Abdul Alim Ibrahim, a senior consultant in psychiatry, asks "How much do Homosexuals impact on society?" – and answers the question with a gay-conspiracy theory.

Zimbabwe's president, Robert Mugabe, "went too far" in describing homosexuals as lower than pigs and dogs, the doctor says, but the development of gay rights in some countries was "not based on scientific studies". Rather, it was the result of "tension made by powerful homosexuals which affected many civil organisations, human rights organisations, decisions and law makers".

Dr Ibrahim is also worried about the effect of this on future generations. "What will be the sexual direction for the next generation," he wonders, "when they will have the right to choose" and "where inconvenient circumstances will lead them to be homosexual"?

The Aween centre claims its work is "unique in comparison with others heading in the same direction" – and for that, at least, we should perhaps be thankful.