Veils, gloves and violence in Iraq 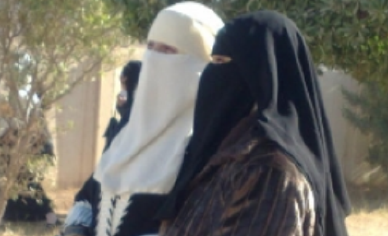 Mosul was always a conservative city when it came to women’s rights. However the Sunni Muslim extremists who took control of the town have made it even more difficult for females. Women must now wear facial veils and gloves and may not leave their homes unaccompanied. In one suspected case at least, the price for protesting these rules has been death. The article below is re-posted from the Niqash website.

On August 10 at around noon, an older woman arrived at a market in the centre of Mosul. She had bad back pain and it was also extremely warm. A bearded, heavily armed man got her attention and then asked her why she was not wearing a niqab, the traditional veil that covers almost the whole face, leaving only the eyes visible.

“I tried but I just about suffocated in the summer heat,” the old lady said, not hiding her sarcasm.

“So you will wear it in winter then?” the bearded man asked her, raising his voice because he thought she couldn’t hear him properly.

“Is Daash even still going to be here in winter?,” the old lady asked, using the Arabic acronym for the Sunni Muslim extremist group formerly known as the Islamic State in Iraq and Syria, or ISIS – the group took control of the northern city in early June this year. She was making a joke – but her question also reflects the fact that the extremists, who now call themselves simply the Islamic State, or IS, are being forced to fight to maintain the territory they control.

This story has been repeated often around Mosul – it’s considered a kind of peaceful popular protest against the restrictions that the IS group have put upon local women. Among other things, the IS fighters have forced women to completely cover themselves up. They must wear gloves and the niqab, rather than just a headscarf or hijab. Married women are supposed to wear a black niqab and unmarried women must wear a white niqab. Additionally women have been banned from working outside their homes – the only exceptions are obstetricians and nurses.

Women were also instructed not to leave the house alone unless it was an emergency or they were accompanied by a male relative. The extremist group banned mixed classes at schools and universities and said that any violations of any of these rules were punishable by flogging.

The IS rules have seen women all but disappear from Mosul’s daily life. Their faces and voices have disappeared from schools, banks, government departments and from the city’s cultural, artistic and sporting life, as if they had never existed in a society that had always treated women with respect.

A cloth merchant in Mosul told NIQASH that sales of his black and white fabric have increased dramatically. A lot of women are buying this cloth but generally they are not happy about it, the merchant, Ammar Abdullah, noted. “After buying fabric for herself and her three daughters, I heard one woman saying that no matter what they do, Daash will never turn Mosul into a village,” he said. By this she meant that villagers were backward and accepted the curtailment of women’s freedoms more readily whereas people in a big city like Mosul were better educated and more cosmopolitan.

Over the past weeks, the IS group has set up checkpoints for vehicles travelling in the city. Part of their mission is to check that women are wearing the niqab. If a woman in any car is not, then the driver’s papers are confiscated and the driver must report to a building, formerly the headquarters of the local Youth and Sports department, in the Tayaran area of Mosul, where they would be investigated.

Eye witnesses say they have also heard IS group members verbally abusing women who are not fully covered as they have instructed. Iraqi media, broadcasting from outside Mosul, have carried reports of this as well as reports that many local women are waiting for verdicts from the courts that the IS group has set up to carry out Sharia, or religious, jurisprudence.

The niqab remains controversial in religious scholarship, with some saying it is prescribed by the Koran – even within various different sects there are several different descriptions of how women should cover themselves - and others saying it was a cultural adaptation in certain Islamic societies.

“In Iraq, the niqab started to become more popular as a result of Saddam Hussein’s ‘Faith Campaign’,” says religious researcher, Mohammed Hashem. Hussein’s campaign really hit its stride in the mid-1990s when international sanctions on Iraq were at their worst. “In the 1960s and ‘70s, older women would cover their faces with a light veil but most of the younger women did not.”

The wearing of the niqab is a product of male-dominated and regressive society, local writer Ahmad Hamadoun, argues. The niqab has existed for generations and it comes from an uncivilised, tribal way of thinking.

Hamadoun also says he can’t rule out the fact that the IS fighters might use the niqab themselves as a disguise, when they feel their lives are at risk.

Obviously the IS group is keen to maintain a good image. They quickly denied reports that they had ordered female genital mutilation on women in the areas they control in Iraq and Syria and they’ve accused secular media and individuals of trying to spread rumours about them.

The IS group insist that having girls and boys mix at school is against their religion as is having women leave their homes unaccompanied, without a niqab on. They also deny that they would attack women for not adhering to their rules and beliefs.

However realities on the ground indicate otherwise. The fate of a large group of women from the Yazidi ethno-religious group that IS fighters abducted remains unknown. And there has also been at least one woman attacked in Mosul.

On August 13, a well-known female gynaecologist, Ghada Shafiq, who worked at Mosul’s General Hospital, was attacked by armed men as she left her home in the Tayaran neighbourhood that evening. She was stabbed to death.

No motives for the attack have been declared. But the doctor’s colleagues say that she was targeted by the IS group because of an open letter she had allegedly written. The letter explained a strike that Mosul’s female doctors had been on since August 11.

“Female doctors have continued to work in order to aid the sick and injured of Mosul, a city that is in a critical condition because of the IS’ control over the city, aerial bombardment and the fact that no salaries have been paid for weeks,” the letter, which was seen by NIQASH, said. “Those doctors could have left the city in order to protect their own lives and their families.”

Yet in return, the letter said, “the IS group has imposed the niqab on female doctors in hospitals, with fighters at hospital entrances in order to stop any female doctors coming or going unless they’re wearing the niqab and gloves. When women doctors tried to convince them that they couldn’t do their jobs and treat patients dressed like this, the IS men abused the doctors verbally and began threatening them.”

The letter warned against yielding to these kinds of decisions made by the IS group because accepting their rules was the top of a slippery slope – it meant possible acceptance of later decisions that might be made by the IS leaders, such as those concerning genital mutilation and forced marriages to fighters.

The insistence on things like the niqab was in order to degrade women and that is why the doctors had started their strike, the letter explained: so that women’s voices would be heard. “Does Islam require believers to abuse and harass women in the streets?” the letter asked. “Is this behaviour part of the teachings of Islam?”

For asking those questions, the doctor paid with her life.