Libya's Constitutional Drafting Assembly has set up an online poll asking people what system of government they would prefer – monarchical, presidential or parliamentary – and the results, if they reflect public opinion at all accurately, are rather alarming. 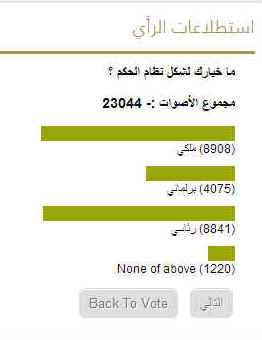 Online polls are far from scientific but the large number of participants in this poll suggests it may broadly reflect current sentiment.

The notable lack of enthusiasm for parliamentary government probably reflects Libyans' disillusion with the lacklustre performance of the General National Congress which was elected after the fall of Gaddafi.

What the poll seems to show is that a large majority – 77% – yearn for a "strong man" at the top, whether in the shape of a king or a president. There also seems to be little support for a theocratic state, which would presumably be included among the 5% voting for "none of the above".

The troubling part of this is that despite their revolution, Libyans still seem to be hoping that a powerful new leader will come along to solve their problems for them – a Libyan version of Egypt's General Sisi, perhaps. If so, it's not only a forlorn hope but also a bad idea.

The history of "strong man" politics in the Arab countries, both monarchical and republican, and the authoritarian rule that inevitably results, ought to be enough of a warning against that.

But hankering after a "strong man" saviour is also a cop-out. It absolves Libyans of the need work out their own solutions – something which is unlikely to be achieved except through consensual politics and an effective parliamentary system.

Developing parliamentary politics in Libya is not going to be easy and it may take a long time, but it will be worth it in the end.

Talk of having a powerful figurehead, on the other hand, raises the question of who might be capable of taking on that role and unifying the country in the face of competing factions.

There has been some public debate in Libya about restoring the monarchy. Earlier this year, foreign minister Mohamed Abdel Aziza called for a constitutional monarchy as “a uniting symbol for the nation”, but Mohammed al-Senussi, the heir-apparent to the throne, has said that monarchy cannot work in post-revolutionary Libya, and he has no desire to become king.

Others have no particular preference, so long as there is an end to the current chaos. Ali al-Houti, a 33-year-old employee at the Martyrs Ministry, told Magharebia website: "As far as I'm concerned, I accept even Libyan folklore artist Nadia Astar to rule Libya, as long as we get rid of these assassinations, bombings and concerns in the country."