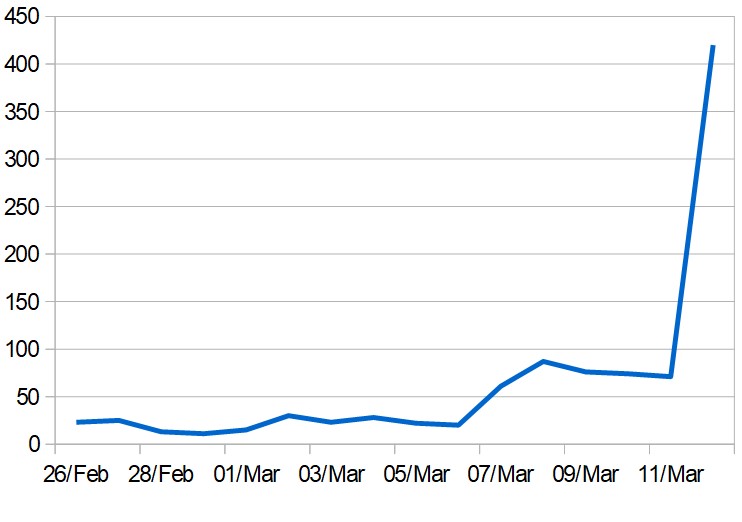 The coronavirus epidemic took a dramatic and terrifying turn in the Middle East on Wednesday. The total of known cases outside Iran leapt by 60% in a single day to 1,056. The number of confirmed new cases was 420 – almost five times the highest one-day increase reported previously.

These are still small figures in comparison with Iran where the total of reported cases rose by 958 to 9,000, but the scale of the increase elsewhere in the region is now extremely ominous.

By far the largest increases were in Qatar and Bahrain, and the specific circumstances of these are discussed below. Substantial rises were also reported in Israel and Saudi Arabia – each with 25 new cases – followed by Lebanon with 16 and Egypt, Iraq and Kuwait with eight each.

The health ministry announced that 238 cases of COVID-19 had been diagnosed among "expatriates" who "reside in one residential complex".

No information was given about the nationalities of these expatriates or the nature of their "residential complex" but the obvious conclusion is that the virus has swept through a compound housing migrant workers. If so, the same thing could happen to thousands or other workers living in cramped conditions – not only in Qatar but in other parts of the Gulf.

The "expatriates" affair in Qatar began on Sunday when three people were diagnosed with the virus. As a result, more than 300 people – most or all of whom lived in the same accommodation – were quarantined. Subsequent tests showed that 238 of them were positive, and those who have so far tested negative are not yet in the clear.

Overall in Qatar, 800 people have been quarantined and 6,000 have been tested, according to the authorities.

In some ways Bahrain's increase is less alarming than Qatar's. In effect, Bahrain is importing existing cases from Iran – deliberately but under controlled conditions.

The government has launched an "International Covid-19 Repatriation Programme" to bring Bahraini citizens back from affected countries. As part of this, the health ministry chartered an aircraft which brought 165 people from Iran under "specialist" supervision. Of these, 77 tested positive on arrival.

There is little risk that any of the returnees will infect others in Bahrain. Those who tested negative were taken to a "Specialist Repatriation Containment Facility" and will not be released until the quarantine period is complete.

However, the fact that almost half the people on the flight were found to be infected is a further indication that Iran's official figures, high as they are, do not reflect the reality there. The Bahrainis appear to have been surprised by "the high volume of passengers testing positive" and say they will be making some revisions to their repatriation programme as a result.

On Wednesday, Kuwait announced severe new restrictions which seem likely to shut down much of the country for the next two weeks:

● All commercial passenger flights in and out of the country will be suspended from mid-day Friday until further notice.

● Work in all government departments is suspended until March 29. This is being treated as "an official holiday".

● Almost all bank branches will be closed until March 29. Each bank will be allowed to keep one branch open in each of the six governorates. Electronic services and ATM machines should be unaffected.

● "Gatherings" at restaurants and cafes are banned and private sports clubs are to be shut down.

● Merchants will be "penalised" if they take advantage of the situation by raising prices.

There are reports of a strike by workers at the Rafik Hariri University Hospital in Beirut – the country's main centre for testing and treating coronavirus cases. It is said to be the only one with quarantine facilities that meet global standards.

The strike appears to be at least partly a result of Lebanon's political malaise and the accompanying economic crisis.

The committee of employees and contract workers blames "indifference" by the hospital's management and stakeholders. Staff have reportedly not benefited from pay raises awarded to public sector employees and there have been complaints about late payment of salaries.

The government has also been accused of neglecting the university hospital for the benefit of private hospitals owned by political figures – though this has been denied.