A university-based group is seeking funds for what it claims will be "rigorous academic research and analysis of propaganda". The project sounds academically respectable – it has official recognition from the University of Sheffield in Britain and has enlisted the famous American professor Noam Chomsky as an adviser – but it also has links to conspiracy theorists, including a 9/11 "truther".

Last November the group set up a non-profit company called Organisation for Propaganda Studies (OPS). The registration documents say its purpose is to carry out "research and experimental development on social sciences and humanities", plus "higher education" at undergraduate and postgraduate levels.

The group also operates a website – propagandastudies.ac.uk – which is registered in the name of Sheffield University and is hosted on the university's servers. The website is still mostly under development but a note on one page says OPS "actively seeks income via donations and consultancy fees as well as research council and other research funding". 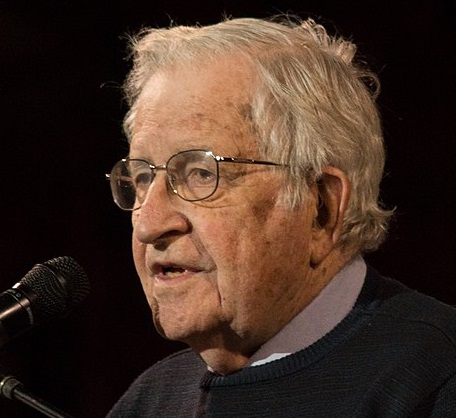 Mark Crispin Miller has become well-known in the US for questioning the usual narratives of al-Qaeda's 9/11 attacks on New York and Washington. "The official narrative is preposterous. On its face it is a ludicrous explanation. We don't accept it," he told a conference in 2016.

He later spoke at a conference on "US regime change in Syria" where he likened reports of atrocities in Syria – including the "barrel bombs meme" – to British and American propaganda during the First World War.

One of his co-directors at OPS, Piers Robinson, posted a tweet describing this as a "great talk".

Robinson, a professor in the journalism studies department at Sheffield, is also a leading figure in the "Working Group on Syria, Propaganda and Media" (see previous blog posts here, here and here).

Articles written by members of the working group dispute almost all mainstream narratives of the Syrian conflict, especially regarding the use of chemical weapons and the role of the White Helmets search-and-rescue organisation. While they are critical of western governments, western media and various humanitarian groups they show little interest in applying critical judgment to Russia's role in the conflict or to the controversial writings of several journalists who happen to share their views.

The activities of this group were the subject of an investigation published by The Times newspaper on Saturday. A strongly-worded editorial headlined "Assad's useful idiots" said:

"Some of the academics involved disseminate material that is wrong, unscholarly and morally odious. Their output is no more reputable than the conspiracy theories of the Kremlin and its online trolls. Such material is an insult to the victims of a depraved regime and a stain on the reputation of the institutions which host its authors."

Robinson has decribed the Russian propaganda channel, RT, as a source of "useful insights" and is frequently quoted in its programmes. Another member of the working group, Dr Tara McCormack of Leicester university, has a regular slot on Russia's Sputnik News.

Rather oddly, the only "research" so far posted on the Syria working group's website has been two articles (here and here) casting doubt on a Russian role in the poisoning of Sergei and Yulia Skripal in Britain.

Alongside Noam Chomsky on OPS's "international advisory board" is journalist John Pilger who appeared on RT last month dismissing the nerve agent attack as part of a "propaganda campaign" against Russia. He told viewers:

"You have an attempted murder, you have a crime scene and you have no evidence and neither do you have a motive. Why on Earth would Russia on the eve of an election and on the eve of staging the World Football Cup want to destroy – if you like – its international name with such a crime?"

Before parting with any money, funding bodies would be well advised to take a close look at OPS and consider whether those involved are in the business of producing serious research, or something else.