THE KURDS live mainly in Turkey, Iran and Iraq and probably number about 25-35 million worldwide (though estimates vary). They are the most important ethnic group without a state of their own. They are mostly Sunni Muslims and have their own languages.

About 15 million Kurds live in Turkey, 6 million in Iran, 5 million in Iraq and up to 1.5 million in Syria. Smaller numbers live in former Soviet republics and in Lebanon. Outside their home region, there are about 825,000 Kurds in Europe (550,000 of them in Germany) and some 10,000 in the United States. 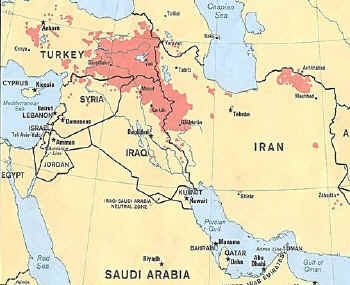 Kurdish timeline
A chronology of key events since 1918 (BBC)

History of the Kurds (Wikipedia)

Kurdish national aspirations (or fears of them) have become a political issue in Turkey and Iraq, and to a lesser extent in Syria and Iran. The Kurdish Human Rights Project summarises the situation country by country on its website.

Iraqi Kurds suffered atrocities at the hands of Saddam Hussein's regime during the 1980s. Following the 1991 Gulf war, the Kurdish areas of northern Iraq became more or less independent - protected from further attacks by a no-fly zone patrolled by the US and Britain. Since the overthrow of Saddam in 2003, the Kurds' long-term relationship with the Iraqi state has become a major issue.

The main Kurdish political organisations in Iraq are the Kurdistan Democratic Party (KDP) led by Massoud Barzani and the Patriotic Union of Kurdistan (PUK) led by Jalal Talabani.

Kurdish view on the constitutional future of Iraq
by Nouri Talabany, 18 June, 1999

Washington accord between PUK and KDP
Full text. 17 September, 1998

Voice of America in Kurdish