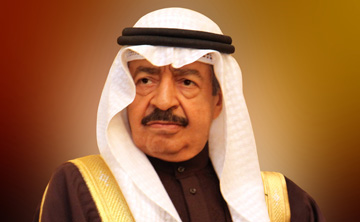 Perhaps it's a sense of their own insecurity that makes Bahrain's royals so eager to "win" obscure and meaningless awards which can then be trumpeted in the Gulf kingdom's media.

There was a notorious occasion in 2013 when King Hamad, in the midst of ongoing repression, was named "Humanitarian Personality of the Year" in a poll by a Kuwaiti newspaper. Allegedly, he won the title with an "absolute majority" of votes (though the number of votes was never disclosed).

According to Bahrain's government news agency, participants in the 2013 poll "praised the role of HM the King in consolidating the pillars of democracy and freedom in the Kingdom and successful tackling of all hostile plots intended to tamper with Bahrain's independence and security and the freedom of its people".

Around the same time, UN Secretary-General Ban Ki-moon added his voice to those complaining about jail sentences, ranging from five years to life, imposed on 20 opposition activists in Bahrain.

A similarly dubious award has now gone to the king's uncle, Khalifa bin Salman Al Khalifa, who at the age of 80 is the world's longest-serving prime minister (having held office since 1970).

The government news agency reports that he has received the "prestigious" Flame of Peace Award – becoming the first Arab prime minister to do so. This, the agency says, is "in recognition of his pivotal role in fostering regional and global peace and security as well as his commitment to carrying out the millennium development goals" and for "his policies advocating religious coexistence and the use of art to boost rapprochement between people and promote the culture of peace and coexistence".

In case you have never heard of the Flame of Peace Award, it was established in 2007 and is presented by the Vienna-based Peace Promotion Association.

In case you have never heard of the Vienna-based Peace Promotion Association, it's an organisation presided over "by Her Imperial Highness Archduchess Herta Margarete Habsburg" (to quote the agency's report).

In case you have never heard of "Her Imperial Highness Archduchess Herta Margarete Habsburg", that's probably because she isn't really an archduchess and, anyway, the Habsburg Empire is long since gone.

To see how "prestigious" the Flame of Peace Award is, you need look no further than the list of its previous winners. One of the recipients in 2009 was Yemen's president, Ali Abdullah Salih, who at the time was not-very-peacefully waging Operation Scorched Earth against the Houthi rebels. 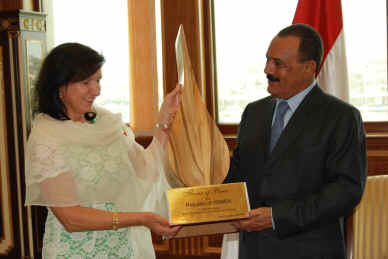