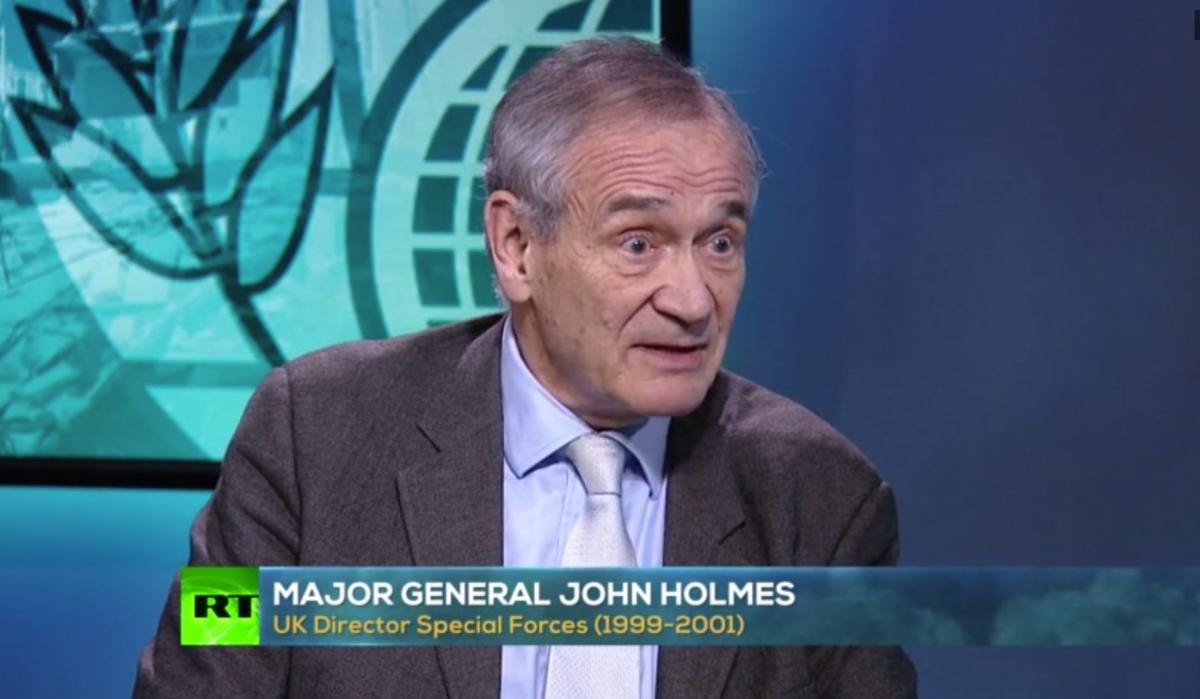 A former Director of Special Forces in the British army appeared on Russia's RT channel on Sunday, talking about the OPCW's investigation of a suspected chemical attack in Douma, Syria.

Retired Major General John Holmes is a board member of the British Syrian Society along with President Assad's father-in-law, Fawaz Akhras, and has been an active supporter of claims that the investigation was flawed.

In October he was one of six "concerned individuals" who attended a private briefing by a whistleblower known as Alex and declared themselves convinced by the whistleblower's allegations of "irregularities".

Last Wednesday he chaired a panel discussion of the OPCW/Douma affair in London. The meeting was held on parliamentary premises in Portcullis House, sponsored by a Member of Parliament. Speakers included journalist Jonathan Steele, formerly of the Guardian, plus Piers Robinson, a former professor at Sheffield University, Professor David Miller of Bristol University and Professor Paul McKeigue of Edinburgh University.

The latter three are all members of the quasi-academic Working Group on Syria, Propaganda and Media which not only defends the Assad regime against accusations of using chemical weapons but also disputes Russia's use of a nerve agent against Sergei and Yulia Skripal in Britain (see previous blog posts).

Russia has been promoting the whistleblower's allegations, along with related documents posted online by WikiLeaks, as part of a campaign to discredit the OPCW. The apparent aim is to undermine the work of the OPCW's Investigation and Identification Team which was established last year to identify the perpetrators of chemical attacks in Syria. Its first report is still awaited.

Holmes appeared on RT's Going Underground programme, where he was interviewed by Afshin Rattansi. Although Holmes told viewers he was impressed with the whistleblower partly because he was a "native English speaker", the interview didn't go entirely smoothly. Holmes declared himself "a firm believer" in the OPCW, suggested WikiLeaks has used exaggerated language and declined to criticise British foreign policy.

Here is a transcript of the interview:

Rattansi: Thanks so much, major general, for coming on the show. The former head of the OPCW organisation Jose Bustani may agree with you about questions over any alleged chemical attack by the Assad government as a pretext for Britain to bomb Syria. The acting US ambassador to the UN, Cherith Chalet, said at the Chinese-convened meeting at the UN this is all brazen disinformation, the UK ambassador Dame Karen Pierce agreed. Why are there any questions over Assad's use of chemical weapons in Syria from your perspective?

Holmes: I think I should state at the beginning that I'm a firm believer in OPCW, what it stands for, and I believe it should be able to act transparently and independently. I joined a panel of nine people to listen to the original whistleblower for a day in Brussels in October last year, and what he had to say was extremely convincing.

There are questions to be answered that perhaps the issued report [by the OPCW] did not reflect the findings on the ground. I'm a firm believer in OPCW and if its procedures are seen to be at fault and open to influence, that is wrong because OPCW will lose any, er – what's the word – any sense of ...

Rattansi: Remind us of this whistleblower Alex's testimony, because the Wikileaks revelations seem to point to alleged suppressed reports, unanimous alarm at unacceptable practices and pre-ordained conclusions in the OPCW Douma report. Is that the kind of testimony you mean? [Rattansi's emphasis]

Rattansi: Well these were the terms from the actual document.

Rattansi: What impressed you about this whistleblower?

Holmes: Native English speaker. He was a senior member of OPCW, he was extremely well qualified for the job and I cannot think of a reason why he became a whistleblower other than he felt very strongly that the final report had not reflected the findings.

Holmes: He's a scientist of course, so to a scientist that's a death knell. He stood there for four, five hours, and had proof of all his allegations, and it was very convincing.

Rattansi: Just drilling down into some of the allegations, what convinced you that there may be some truth in the allegations that the OPCW report into chemical weapons was awry?

Holmes: I think for me it was the fact that in all the various clauses of the report, or an investigation of that kind, toxicology, eyewitness statements, etc – about six or seven of those – in each one there was cause to doubt that the report did not reflect the investigation. Take the canisters – there is one canister that the investigators couldn't quite work out how it ended up on a bed. I'm not being silly here, but it ended up on a bed and the trajectory to get to the bed just didn't stack up.

Rattansi: I mean British authorities haven't alleged he's a spy or working for enemy – perceived enemy – governments of any kind but certainly Eliot Higgins of the Bellingcat organisation, he said that Ian Henderson's testimony which was discussed at the Security Council, er, he wasn't trusted to even be part of the Fact-Finding Mission so there's been quite a lot of rubbishing of this kind of testimony here.

Holmes: I would expect nothing less, in the sense that if an institution, an international institution, is being held to account perhaps its first line of defence is to try to rubbish those that are holding it to account.

Rattansi: And of course what we are talking about here are the reasons why in the end there were RAF Squadrons Six and Nine they were deployed from Cyprus to bomb a Damascus science research centre at two in the morning on 14 April 2018. Can you really see how this could have led to British bombers bombing another country? Mistakes, suppression of truths?

Holmes: I think you would have to go back into statements by the British government over the previous five years in terms of how it would react to the continued use of chemical weapons in Syria. My stance is that the report has been questioned, very genuinely, very accurately, and I'm not interested in why. That's done and dusted. The important thing to me is that OPCW should look at its internal regulations, etc, etc, to see how they can prevent such a thing happening again, because its value is its independence and cannot be influenced by outside actors.

Rattansi: OK. Broadening this out a little, Assad's enemy has been Britain's enemy – ISIS, Daesh, al-Qaeda – how do you view what was happening in Syria with hindsight now the war, the main parts of the war, appear to be over?

Holmes: I think you ... A civil war that goes on for what – eight years, nine years – can start for the most legitimate of reasons and I think in this case it did. It was part of the Arab Spring, the aftermath of that, and Syria is a country made up of many ethnic groups of people and perhaps it was inevitable that something like this happened. But the longer a civil war goes on the nastier it becomes and the more sub-groups form. To start with, first year, two years, it's black and white, then it becomes an amorphous mass. I think that perhaps some of the reporting on some of the alleged crimes by the Syrian regime are probably either untrue or unbalanced. I'm not pro-Syria or pro-anything. Given my rank, I do war, and civil wars are the nastiest kind.

Holmes: I think if you go back over post-colonial British history and the last years of the empire, so to speak, you might find numerous examples like that. Nowadays the difficulty for governments of any kind is the mass of information that is out there and the speed with which it reaches the public, and perhaps in some cases they have to reach very quick decisions or say nothing at all.

Rattansi: There are a thousand questions I could ask about other subjects because of your career in the army but have you ever witnessed a cover-up of this kind involving a multilateral organisation that could have made the RAF bomb another country?

Holmes: No. That is unless I'm unaware of it. [Laughs]

Rattansi: You must read up on it. So this is actually quite unique?

Holmes: Yes, and that's one of the reasons I joined the panel, because I'm a firm believer in OPCW.

Rattansi: And this is the panel occurring at Portcullis House in Westminster. Do you think the UK needs to offer restitution to Syria if it all turns out that the questions were legitimate and in fact the OPCW report into the chemical attack in Douma was nobbled?

Rattansi: Ladies and gentlemen, thank you.