"Yemen is one of the oldest irrigation civilisations in the world. For millennia, farmers have practised sustainable agriculture using available water and land. Through a myriad of mountain terraces, elaborate water harvesting techniques and community-managed flood and spring irrigation systems, the country has been able to support a relatively large population. Until recently, that is. Yemen is now facing a water crisis unprecedented in its history.

"The Middle East is an arid, water-stressed region, but Yemen stands out for the scale of its water problem. Yemen is one of the world’s ten most water-scarce countries ... Its aquifers are being mined at such a rate that groundwater levels have been falling by 10 to 20 feet annually, threatening agriculture and leaving major cities without adequate safe drinking water. Sanaa could be the first capital city in the world to run dry ...

"Many wells have to be drilled to depths of 2,600 to 3,900 feet, extremely deep by world standards. Yemen also differs from several Arabian Peninsula countries in that the government lacks legitimacy and the people strongly resist regulations and laws imposed from the top down."

Water resources and use in Yemen
(Aquastat)

Will Yemen run out of water?
By  Chris Fitch, Geographical, 2 February 2015

Getting dug into Sheba's Terraces
How Yemen's mountain farmers are learning to control rainwater. By Brian Whitaker, The Guardian, 24 January, 1992

Water Management in the Sana'a Basin and the Crisis of State Legitimacy
Steven Caton, Yemen Update No. 48 (2006)

Roots of Agriculture: A Season of Excavation and Survey in Wadi Sana'a, Hadramawt
Joy McCorriston, Yemen Update No. 47 (2005)

Around 90% of the country's water is used for agriculture and, of that, an estimated 37% is used for growing qat – Yemen's favourite drug. In some water-stressed areas, qat fields occupy half the total irrigated area.

Socotra [or Soqotra] is an outpost of Yemeni territory in the Indian Ocean. It contains "one of the richest and best-preserved dry tropical floras in the world. It contains "over 850 flowering plant species, of which some 300 are endemic including such botanical oddities as the cucumber tree (Dendrosicyos socotranus) and the dragon’s blood tree (Dracaena cinnabari)". It is designated as a UNESCO World Heritage Site. 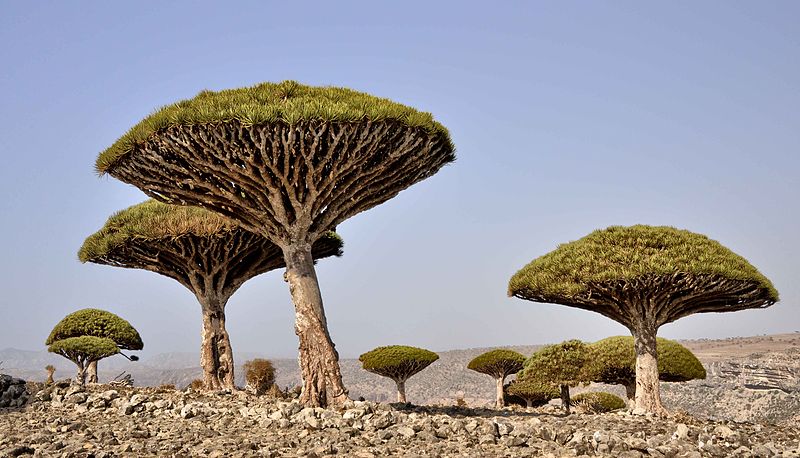 Utmah Wildlife Sanctuary
This area, noted for its natural history, was declared a protected zone in 1999. (Yemen Times, 13 March, 1999)

The birds of Yemen
Summary of a survey conducted by the Ornithological Society of the Middle East (OSME) in Southern and Eastern Yemen and Socotra. Yemen Update No. 36 (1995)

Wildlife and Conservation in Eastern Yemen
Yemen Update No. 34 (1993)

The Vegetation of the Republic of Yemen (Western Part)
Yemen Update No. 33 (1993)

Observations on the Baboons in the Garden of the "Bostan Restaurant"
Yemen Update No. 28-29 (1991)