No answer from Ben Ali

Tunisian demonstrators confront the police by singing the national anthem

With the disturbances in Tunisia showing no sign of abating, President Ben Ali decided to address his people on television last night. But his seven-minute speech, also relayed to the wider Arab world via al-Jazeera, didn't go quite according to plan. Three minutes and 39 seconds into the broadcast, crisis turned to hilarity when his phone rang.

Ben Ali didn't answer, and pressed on with his speech, looking slightly uncomfortable as the phone continued ringing. Within minutes of the broadcast ending, jokes about his mystery caller were circulating on Twitter.

As for the speech itself (English transcript here), Ben Ali didn't really have anything to say. A smart politician, in a similar situation, would have offered some new initiative for dealing with it, but from Ben Ali there was nothing beyond what has already been announced. He talked vaguely about "sparing no efforts", and urged government officials to "avoid all shortcomings" and "shoulder their responsibilities".

He expressed sympathy for the unemployed while pointing out that unemployment affects other countries too.

The initial incident with the jobless university graduate that triggered the riots was understandable and regrettable, he said, but it had been exploited "by some sides who do not wish good to the homeland" and by "some foreign television channels which broadcast false and unchecked allegations and rely on dramatisation, fabrication and defamation hostile to Tunisia".

He also threated to use the law "rigorously" against "a minority of extremists and agitators in the pay of others".

Overall, it was the kind of speech that old-style Arab leaders typically make when they are in a corner and, in the absence of any real content, and despite his claims that the disturbances have been hyped by foreign media, its actual effect was to signal – unintentionally – to the entire Middle East that something serious is happening in Tunisia.

In a parallel public relations offensive yesterday, Ben Ali paid ahospital visit to Mohammed Bouazizi (the young fruit seller who set fire to himself), "enquiring about his health". A rather grotesque official photograph showed Bouazizi swathed in bandages like an Egyptian mummy. 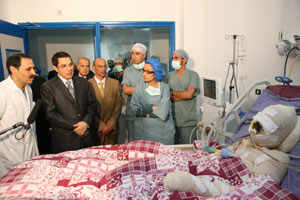 The president also met parents of Hassan Ben Salah Neji, the young man who electrocuted himself, and Mohamed Ammari, the teenager shot dead by police.

Among other events yesterday, al-Jazeera reports that an anti-government rally in Gafsa was blocked by police.

In Tunis, about 300 lawyers held a protest near the main government building and a high school trade union demonstrated outside the education ministry.

Distribution of two opposition party newspapers, Tareeq al-Jadid and al-Mawqif, has reportedly been blocked because of their coverage of events in Sidi Bouzid.

The Los Angeles Times has an interesting article by Lahcen Achy about Tunisia's economic policies and where they have gone wrong.