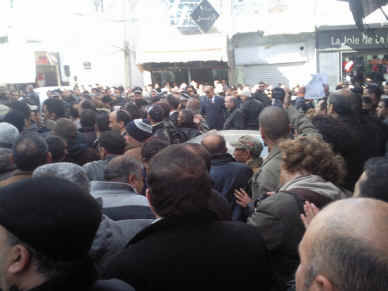 Protests in Tunisia spread to the capital, Tunis, yesterday when human rights activists, trade unionists and students held a demonstration in the Place Mohamed Ali in solidarity with the people of Sid Bouzid. The nawaat.org website has videos and photographs.

Meanwhile, it is reported (via Twitter) that the towns of Meknassi, Mezouna, Menzel Bouzian – all in the Sidi Bouzid governorate which has been the scene of disturbances during the past week – are under curfew, with joint police-army patrols.

The protests are getting very little coverage in the mainstream media – one reason being the restrictions on journalists imposed by Ben Ali's regime, another being that the international news ogranisations are more or less on autopilot over the Christmas period, and so we're left mainly with information posted by individuals on the internet.

Also, judged within the overall framework of news from the Middle East, the events in Tunisia may not look particularly dramatic: "only" two dead so far, and al-Arabiyya puts the number of participants in yesterday's Tunis demonstration in the hundreds rather than thousands (though it does say that 2,000 took part in the Menzel Bouzaiene riot on Friday).

It's only when you view them in the context of Tunisia, a police state where such things are not supposed to happen at all, that the protests of the last week begin to look much more significant. If the regime isn't worried by them, it ought to be.

Yesterday, nawaat.org reported (in French) that the director-general of the central bank had paid an urgent visit to the presidential palace and that the presidential plane was on standby, ready to fly the Ben Ali family out of the country. That may be wishful thinking on the part of nawaat's sources. However, it may not be entirely preposterous to suggest that the writing is on the wall for the Ben Ali regime, even if its end is still some way off.

The first test is whether the events of the last week will succeed in breaking down the "fear barrier" among the Tunisian public. Is popular discontent about unemployment, corruption and many other things finally beginning to outweigh people's fear of the authorities? And if a small number are seen to have lost their fear, will others join them? It's possible, though by no means certain.

The second, and perhaps more important test, is the reaction from those who help to maintain the regime's control: the security forces and government officials. Will they continue to accept the official line that President Ben Ali has constantly lavished "unfliching care" on his citizens and that "certain sides" are behind the troublemakers? Privately, among the lower ranks at least, they probably share many of the protesters' frustrations. How many of them have sons, daughters, brothers or sisters who are struggling to find a job?

There's a story in the Qur'an – a sort of parable – about the ancient Marib dam in Yemen and how a mouse brought it down by dislodging a single stone, and in the process destroyed a civilisation. The trigger for the Tunisian riots was something equally small. Twenty-six-year-old Mohamed Bouazizi had a university degree but no work. To help out his family he took to selling fruit and vegetables in the street without a licence. When the authorities stopped him and confiscated his produce, he set himself on fire.

Bouazizi's action was extreme, but his plight is something many Tunisians can relate to. Contrast that with the corruption and the notoriously extravagant lifestyle of the president's family, and the anger becomes even more understandable. As the American ambassador put it last year, in a cable recently published by Wikileaks:

"Corruption in the inner circle is growing. Even average Tunisians are now keenly aware of it, and the chorus of complaints is rising. Tunisians intensely dislike, even hate, first lady Leila Trabelsi and her family. In private, regime opponents mock her; even those close to the government express dismay at her reported behaviour. Meanwhile, anger is growing at Tunisia's high unemployment and regional inequities. As a consequence, the risks to the regime's long-term stability are increasing."

Besides the shopaholic Leila Trabelsi, there's the president's son-in-law and possible successor, Mohamed Sakhr El-Matri (or Materi), whose pet tiger consumes four chickens a day. The American ambassador had dinner at his house in Hammamet last year (again, reported in a Wikileaks document):

El-Materi's house is spacious, and directly above and along the Hammamet public beach. The compound is large and well guarded by government security. It is close to the center of Hammamet, with a view of the fort and the southern part of the town. The house was recently renovated and includes an infinity pool and a terrace of perhaps 50 meters. While the house is done in a modern style (and largely white), there are ancient artifacts everywhere: Roman columns, frescoes and even a lion's head from which water pours into the pool. El Materi insisted the pieces are real. He hopes to move into his new (and palatial) house in Sidi Bou Said in eight to ten months.

The dinner included perhaps a dozen dishes, including fish, steak, turkey, octopus, fish couscous and much more. The quantity was sufficient for a very large number of guests. Before dinner a wide array of small dishes were served, along with three different juices (including Kiwi juice, not normally available here). After dinner, he served ice cream and frozen yoghurt he brought in by plane from Saint Tropez, along with blueberries and raspberries and fresh fruit and chocolate cake. (NB. El Materi and Nesrine [his wife] had just returned from Saint Tropez on their private jet after two weeks vacation.)

... Most striking of all, however, was the opulence with which El Materi and Nesrine live. Their home in Hammamet was impressive, with the tiger adding to the impression of "over the top." Even more extravagant is their home still under construction in Sidi Bou Said. That residence, from its outward appearance, will be closer to a palace. It dominates the Sidi Bou Said skyline from some vantage points and has been the occasion of many private, critical comments. The opulence with which El Materi and Nesrine live and their behaviour make clear why they and other members of Ben Ali's family are disliked and even hated by some Tunisians. The excesses of the Ben Ali family are growing.