Mauritania: revolt of the "hand-towels"

The unrest in Mauritania continues to get scant attention from the English-language media, so here are some more details, pieced together from other sources.

The video above is a report from al-Jazeera about the mass protest on Tuesday when opposition groups organised nine separate but coordinated demonstrations in the capital, Nouakchott.

Alakhbar, a Mauritanian news website, also has a report (in French), with pictures. A speaker from the RFD (Regroupement des Forces Démocratiques) party called on President Aziz to "leave while we tell him to peacefully" and there were also complaints about the rising cost of living. Alakhbar has also published the text of a speech (in Arabic) by Saleh Ould Hanennaof the Mauritanian Union for Change (HATEM).

The video below shows an altercation outside the health ministry on Tuesday when members of a health workers' union confronted a minister. The minister reportedly described the protesters as "vulgar" and "hand-towels" (an insult that presumably sounds more offensive in Arabic than in English).


On Sunday, unemployed graduates began a sit-in outside the presidential palace. Twenty-eight were later arrested. More were arrested on Tuesday as they attempted to resume the sit-in – and
returned again on Wednesday after being released by the police.

At Nouakchott university, police reportedly used batons and teargas to disperse a sit-in at the law school. Five leaders of the UNEM students' organisation were arrested. 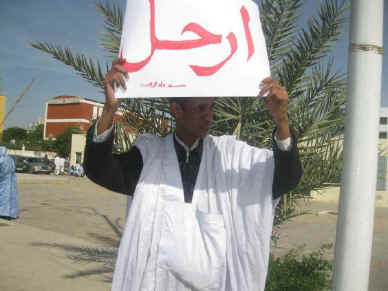 A protester tells the president to go. Photo posted by @lissnup