Yemen: All the president's missiles?

Ex-president Ali Abdullah Saleh continues to haunt the political scene in Yemen, more than nine months after being ousted from office. In the latest confrontation, Saleh's eldest son, Ahmed, is refusing to hand over long-range Scud missiles to the defence ministry, Reuters reports.

Ahmed, a brigadier-general who at one stage was regarded as heir to his father's presidency, controls the missiles in his capacity as commander of the Republican Guards. It is unclear how many Scuds he has, but these are far from being insignificant weapons (see picture). 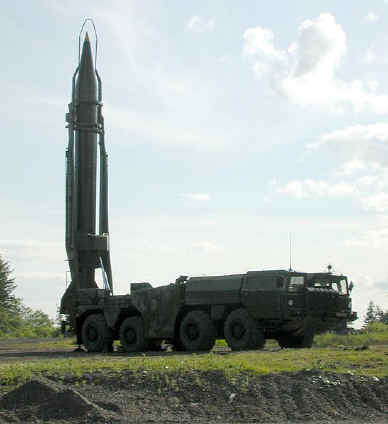 After a 13-month uprising against his rule, Ali Abdullah Saleh was finally persuaded (under international pressure) to leave office last February. In return, the Yemeni parliament granted him immunity from prosecution and he remains in the country.

Meanwhile, Yemen's "transitional" president, Abd Rabbuh Mansur Hadi, who previously served as Saleh's deputy, has been battling to assert his authority – a task made more difficult by the presence of Saleh's relatives and loyalists in key positions.

In April, Hadi removed about 20 top commanders, including a half brother of Saleh and other relatives.

In August, he began chipping away at General Ahmed's power base by transferring units from the Republican Guards to a new force under his command or under different regional commands.

The current squabble over Scuds appears to be a further attempt by Hadi to curtail Ahmed's power and bring Yemen's military under unified command. Besides Ahmed's Republican Guard there is also the problem of General Ali Mohsen al-Ahmar, a a kinsman of Saleh who was once a strong supporter of the ex-president but later turned against him and is now said to be close to the Islamist-traditionalist Islah party. Ali Mohsen also controls his own troops.

Aside from these regular forces, Yemen also has tribal militias (not to mention jihadist insurgents) and a generally well-armed citizenry. On November 30, five people were injured in Sana'a by an explosion at the home of businessman Ali Garman Muhammed Garman. The blast was said to have been caused by a fire in the armoury that the family kept in their cellar.

Yesterday also brought the assassination of yet another senior member of the security services. Brigadier-General Ahmed Saeed Mubarak Baramada, deputy director of the political security in Hadramawt province was shot dead on his way to work by two men on a motorcycle.

Motorcycle assassinations are a regular occurrence and al-Qaeda is usually blamed for them. Last month, in an effort to crack down on this, the government began confiscating unlicensed bikes – much to the annoyance of poor but honest Yemenis who use them for deliveries or as "taxis" carrying pillion passengers.

Unlike many of his opponents, President Hadi does not have a significant power base inside the country and his position would be precarious were it not for the fact that he has strong American backing behind the scenes.

The problem with that, though, is that the US seems more interested in using Hadi to further the war on al-Qaeda than in furthering Yemen's political development. This is short-sighted, because a well-functioning political system offers the best long-term defence against jihadism.

Hopes for political restructuring are pinned mainly on the long-promised "national dialogue". To that end, a preparatory committee has now finished work and is due to present its report to President Hadi shortly.

The dialogue is supposed to be inclusive and fully representative but there are fears that the more peaceful elements – youth movements, women, civil society, etc – will be sidelined by those whose weapons give them political muscle.

Even if the dialogue succeeds, restoring unity to this notoriously fractious country will still prove a tall order. Across the country, powerful tribal leaders maintain their hold over their own fighting forces; even the Yemeni army, many here complain, are closer to a collection of private militias than it is to a truly national military.

Rather than holding a monopoly on power, the post-Saleh government often appears to be at the mercy of various factions whose interests often seem to diverge from those of the nation as a whole. In some sense, it's a thorny paradox: As the country aims to move forward, the cooperation of such divergent interest groups is key. But their continued sway, many argue, could render any progress in Sanaa moot.

"The source of Yemen's problems is clear," says Mujahid al-Kuhali, who serves as Minister of Expatriate Affairs in the unity government. "The center of power remains in the hands of certain armed groups controlled by men ... who work for themselves rather than for Yemen. Until this changes, the problems will not be solved."