President Hadi: a man in the shadows 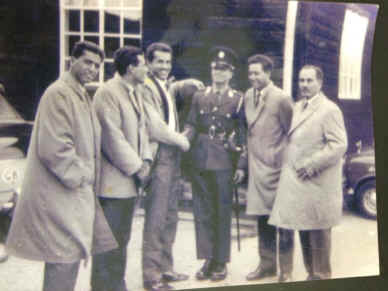 Considering that Abd Rabbu Mansour Hadi has been president of Yemen for just over a year, it's remarkable how little is known about him. Even during his 18 years as ex-president Saleh's deputy he remained mostly below the radar. It was intriguing, therefore, to see a photo of the future president, taken in 1966, surface on Twitter recently.

The picture (above, with a larger version here) is said to show Hadi, then aged 20 or 21, in British army uniform. It appears that he is being congratulated by friends, possibly at a graduation ceremony.

According to Ibrahim Mothana, who posted the photograph, it was taken at the British military academy, Sandhurst. Aaron Edwards, however, suggests the location was not Sandhurst but the old Mons Officer Training course at Aldershot.

Either way, the interesting part is why he was in Britain. This was during the last months of British occupation in southern Yemen and Hadi – who came from Thukain in what is now Abyan province – had signed up with the Federal Regular Army, a Yemeni force under British command. (There's a book about the FRA here, and a review of the book here.)

According to Mothana, two members of the FRA were given military scholarships each year to study in Britain – and Hadi was apparently one of the last of them.

In 1967, the British withdrew and the National Liberation Front took over southern Yemen. Hadi then transferred to the new national army and was put in charge of an armoured division at al-Anad military base, about 40 miles north of Aden. In 1969 he went on a course in Egypt, studying tanks.

As for the rest of his career, the official CV is very sketchy, though an unofficial website created by supporters of Hadi gives some more details.

In 1972, when border clashes broke out between north and south Yemen, Hadi was a member of a mediation committee. From 1976 to 1979 he studied in the Soviet Union, where he wrote a paper on "Defence of Mountainous Areas in the Strategy of War" and received a master's degree in military science. Returning to southern Yemen, he became a staff officer at the military college.

"By ... 1983, South Yemen had a new ruler, Ali Nasser Mohammed, after the former leader Abdul Fattah Ismail ... left for exile in the Soviet Union. Hadi moved to Aden as he was then promoted to Deputy Staff Leader for Supply and Management for the Army. He was also appointed the chairman of the negotiating committee in militarising deals with the Soviet Union and tasked with creating modern military brigades.

"In 1986, South Yemen experienced a bloody civil war after the return of Abdul Fattah Ismail. Ismail and his loyalists tried to regain the power from the government of Ali Nasser Mohammed. The power struggle resulted in a month long civil war that took the lives of around 4,000 to 10,000 people. The end result was the death of Ismail and the ousting of Ali Nasser Mohammed. The deposed Ali Nasser alongside 60,000 including Abd Rabbu Mansour Hadi defected to North Yemen.

"In the following years, Hadi worked alongside his colleagues to gather the displaced southern military units, and then coordinated with the Northern Regime to reorganise the brigades. These brigades would be called "The Brigades of Yemen's Unity". He remained in the north until May 22, 1990, when both the Democratic People's Republic of Yemen (South Yemen) and Yemen Arab Republic (North Yemen) officially united."

It wasn't long before Yemen's north-south unification ran into trouble. Southern leaders attempted to secede but were defeated by Saleh's northern forces during a brief war in 1994.

It's unclear exactly what Hadi did in the 1994 war, though clearly he had sided with Saleh since he was rewarded shortly afterwards with the post of defence minister and then that of vice-president.

Up to that point, Hadi's entire career of almost 30 years had been spent in the military and, although military life in Yemen is always politicised to some extent, he doesn't appear to have shown much interest in politics. According to the Hadi supporters' website, he continues to read about military history.

Even as vice-president of Yemen, he never really emerged as a political figure. Lacking a power base of his own, he remained largely in Saleh's shadow and it was unclear what – if anything – he stood for. A Wikileaks cable in 2004 described him as a "reputed" champion of reform but pointed out that his role was mainly ceremonial and gave him little influence among the government's decision-makers.

It wasn't until the uprising in 2011 that he began to publicly distance himself from Saleh. He is said to have threatened to resign three times and at one stage Saleh's son, Ahmed, surrounded his house with tanks.

Since becoming president he has sought to remove Saleh's relatives and closest associates from positions of power – not entirely successfully – but others have accused him of trying to establish his own crony network too.

"Charismatic" is not a word that springs to mind when discussing President Hadi. To describe him as a "man of mystery" would imply that interesting things about him are yet to be uncovered, when possibly there are none.

Even so, it would be good to know more. Readers with any further information are welcome to post it in the comments section below.