There's now little doubt that the US is planning air strikes in Syria in response to last week's chemical attacks near Damascus – and that the strikes will go ahead with or without approval from the UN Security Council. The US will be supported in this politically, if not militarily, by a number of western and non-western countries.

In Britain, the Independent newspaper says the air strikes will come "within two weeks". The paper quotes Downing Street sources as insisting that strikes will be specifically related to the issue of chemical weapons and not a general intervention in the Syrian conflict:

"The aim here is to have a clear, concrete response from the international community that deters further outrages and makes clear that we will stand up to the prohibition of chemical weapons. We need to show that their use will not go unchecked ...

"This is not about trying to shape the outcome of the Syrian conflict by military means. This is focused on the incident that happened on Wednesday."

UN secretary-general Ban Ki-Moon made a similar point earlier today when he told reporters: "We cannot allow impunity in what appears to be a grave crime against humanity."

As far as the legality of air strikes is concerned, the US and Britain have apparently not ruled out the possibility of seeking a Security Council resolution, though it is likely to be blocked unless Russia has a sudden change of heart.

However, James Blitz in the Financial Times [subscription] suggests other options are available:

"There are precedents for legal action without UN backing. The US and its allies conducted the 78-day bombardment of Serbia in 1998 to stop the ethnic cleansing of Kosovo. This had no UN authorisation. Instead, then president Bill Clinton invoked the argument that it was right to protect people in danger. Few, if any, people today suggest that this was not a just war.

"The US, in the meantime, could argue that Syria is in breach of the 1925 Geneva Protocol, which outlaws the use in war of poison gas. Since the end of the first world war, global powers have placed a ban on the use of chemical weapons, especially nerve agents. The US could now make the argument that a military response is justified to prevent the indiscriminate use of chemical weapons becoming a new norm of warfare."

As for the nature of an attack, Blitz suggests it would be "a one-off intervention" that sends "a severe warning shot to the [Syrian] regime" in order to "deter Assad from allowing chemical weapons to be used in this way again". He points out that this could cause civilian casualties, but "failure to take any meaningful action at all would give the Assad regime the green light to use chemical weapons attacks on civilian population with even greater impunity".

Meanwhile, the 20 UN weapon inspectors in Damascus have reportedly set off today to visit the scene of last Wednesday's attacks after the regime finally granted them permission. Doubts have been raised about how much evidence they are likely to find at this stage and it's unclear whether they will be allowed to do anything more than attempt to establish whether chemical weapons were used.

Their original mandate, agreed with the Syrian regime when they arrived in Syria to investigate other suspected chemical attacks, did not allow them to determine who was responsible for using such weapons – and this may also be the case with the most recent attacks. The BBC says "there is no indication that the mission's brief has changed".

Today's edition of the Emirates-based newspaper, The National, has an exclusive report claiming that Syrian military officers had not been told that the rockets they were firing contained chemical warheads. The story, by Phil Sands, quotes "a source from a well-connected family, who has contacts with both the opposition and regime loyalists" who says:

"We have heard from people close to the regime that the chemical missiles were handed out a few hours before the attacks.

"They didn't come from the ministry of defence but from air force intelligence, under orders from Hafez Maklouf [a cousin of Assad]. The army officers are saying they did not know there were chemical weapons. Even some of the people transporting them are saying they had no idea what was in the rockets – they thought they were conventional explosives."

The same report includes an account of events on Wednesday night provided by the opposition Syrian National Coalition [SNC] which is said to be "based on a timeline from residents inside the affected areas and information collected from sources inside the regime who leak information to the rebels".

The SNC, obviously, is not an impartial source but the amount of detail included in this version is certainly interesting:

"The SNC said rockets loaded with chemicals were delivered to General Tahir Hamid Khalil, and were later launched from a regime army base housing the 155 brigade.

"After a night of fierce fighting on Tuesday in an area on the edge of Damascus known as Eastern Ghouta – once known for its clean natural water and lush orchards – regime troops moved back, leaving only aircraft overhead, the SNC said.

"At 2.30am on Wednesday, regime forces under the command of Gen Ghassan Abbas began launching the rockets, 16 of which were aimed at the eastern suburbs of Damascus, and hit Zamalka and Ain Tarma, densely populated areas in the Eastern Ghouta.

"As opposition emergency services responded to those initial chemical attacks, rockets armed with high explosive warheads were fired into the same area, hitting ambulance teams as they tried to help victims of the chemical strikes.

"At 4.21am, 18 more missiles were fired into eastern Damascus by troops loyal to Mr Al Assad, the SNC said. Another two missiles were aimed at Moadamiya, to the south-west of Damascus, an area known locally as the Western Ghouta.

"By 6am, dozens of people from Moadamiya had been taken to a local field hospital suffering from the effects of exposure to a still unidentified poison gas.

"At least five poison gas rockets were fired, according to the SNC, four landing in the Eastern Ghouta and one in Moadamiya. Strong winds pushed the gases out from their impact area in Zamalka across to Erbin, a neighbouring district, where more people died.

"According to the SNC's account, loyalist forces close to the attack area were issued orders from a 'high level' to wear gas masks in anticipation of the attacks."

Separately, on the internet, there are attempts to work out the firing position of rockets thought to be involved in the chemical attacks.

Photographs of rockets embedded in the ground (see below) show the direction of impact – and hence the direction from which they were fired. The task is to determine the exact direction of fire from clues in the photographs, such as buildings and shadows. There's more about this here and here.

Further analysis by blogger Brown Moses, using satellite photographs, appears to confirm that at least one of the rockets, labelled 197, was fired from the north, where the regime has a number of military positions. 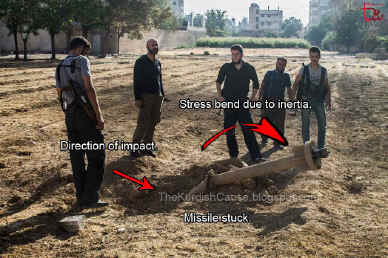