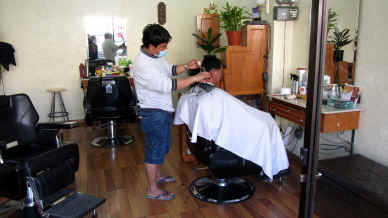 This is the second in a series of blog posts exploring employment problems in the Arab Gulf states.

THE KAFALA ("sponsorship") system lies at the heart of employment policies in the Arab Gulf states. Introduced in the 1950s, it was intended to speed economic development by providing a plentiful but easily dispensable supply of foreign labour without the complicating factor of permanent immigration. Citizenship, and the privileges that come with it, would not be extended to foreigners since they would eventually leave and the traditions and values of Gulf society would remain intact. That, at least, was the theory.

What this meant in practice was that workers seeking to enter the country would require a sponsor – either an individual citizen or a locally-based company – and the sponsor would assume legal and financial responsibility for them for the duration of their employment contract. When the contract expired (typically after a couple of years) it was also the sponsor's duty to ensure that the worker left the country, even to the extent of paying the fare to return home.

The effect was to place the burden of enforcement more in the hands of sponsors than the authorities, though in the event market forces proved more powerful than either and the intended rotational system of short-term migrant labour was impossible to achieve. Andrzej Kapiszewski writes:

"The majority of expatriates have stayed beyond the term of the original contract as employers usually prefer to keep workers who have already gained some local experience rather than bring in the new ones. Moreover, importing a new worker involves additional costs to employers. As a result, the average period of time that foreign workers spend in the GCC countries continues to extend, and the number of ‘almost permanent’ foreign workers has increased, albeit not formally."

Kafala, as a concept, has its roots in ancient and hallowed desert traditions of hospitality towards strangers. As an employment practice, though, it is neither honourable nor hospitable and a whole industry has grown up around it. The Philippines-based Migrant Forum in Asia explains:

"GCC nationals with business licences are given permission for work visas for a given number of immigrants. They may sell these visas to others, leaving the migrant worker undocumented. This is known as ‘visa trading’.

"Visa trading is a multimillion-dollar industry; there are high fees for the initial sponsorship, followed by two-year renewal fees. In the UAE, a two-year work visa for an Indian [worker] sells for around US$2,000 and for an Iranian [worker] for US$4,000."

Visa trading is illegal, though prosecutions are almost unheard-of.

The kafala system has frequently been denounced by rights organisations and has sometimes been described as a modern form of slavery. In the Gulf itself there is growing recognition of the problems it causes and some talk of reform (Bahrain, for example, made changes in 2009 which I shall discuss in a future blog post).

The fundamental objection is that it creates an inequitable relationship between workers and their employer-sponsors – one which exposes the workers to numerous forms of exploitation. More specifically, it ties their continuing (legal) residence in the country to continuing employment with their sponsor.

Workers cannot legally change jobs and acquire another sponsor without the original sponsor's permission, so they may easily become trapped with an abusive or exploitative employer. If that happens (and it often does) they have little or no legal protection and few courses are open for seeking redress.

It they decide to walk out of the job, their residence permit becomes invalid but they may be unable to leave the country. Sponsors often retain workers' passports and, in the event of a dispute, can take other steps to prevent them being granted an exit visa.

In this way, a worker who arrived in the country perfectly legitimately can end up living there illegally and involuntarily, hiding from the authorities and forced to seek work in the informal economy in order to survive.

Workers who arrive in the Gulf with high financial expectations often find the reality is very different. Azfar Khan and Hélène Harroff-Tavel write:

"In terms of exploitative practices, migrant workers may suffer from underpayment, non-payment and delays in payment of wages and unwarranted additional costs.

"Cases exist where two contracts are made out for the worker, one for official procedures and another for practical implementation, with a lower wage and poorer working conditions. Workers who are faced with this situation upon their arrival are forced to accept contract substitution, having borne high costs for emigration and recruitment.

"Other examples exist of kafeels [sponsors] deducting the costs of clothes, food or lodging from wages due to workers. Wages can also be delayed for weeks or months. Often, no advances are made in the first weeks of employment to help workers meet their basic needs.

"For each worker, the kafeel is expected to bear costs corresponding to payments, such as for medical insurance and the issuance of employment and residence permits. Workers are not supposed to bear any of these costs.

The problem of "absconding" workers is a much-discussed topic in the Gulf, and the employers are usually regarded as the ones who suffer rather than the employees who may well have serious grievances. The terminology used in these discussions is also very revealing, conjuring up images of prisoners escaping from jail.

In fact, this jailbreak analogy may not be far off the mark. In Qatar, for example, "absconding" is a criminal offence under Article 11 of the Sponsorship Law. Migrant workers found to have violated this face up to three years in jail and/or a fine up to 50,000 riyals ($13,731). Alternatively they can pay a "conciliation" fine of 6,000 riyals ($1,648) to the interior ministry, if they have the money.

Amnesty International, which last year published a comprehensive report on migrants in Qatar, found one Indian "absconder" in a deportation centre there:

"[The man said] he had been recruited to work in his employer’s house but after five months in Qatar, his employer took him to work in the desert against his will, as a camel herder, which he said was very demanding and hot work. He said he left this job after one month, without his employer’s permission and was soon after caught by the police.

"He said he had been held in the deportation centre for four months ... His testimony would suggest that he may have been a victim of human trafficking."

Amnesty's report also looked at the difficulties workers face in Qatar if they wish to complain about an employer to the Labour Relations Department. The first hurdle is that the office is closed at weekends:

"To submit a complaint against their employer, they must therefore take a day off work. It is highly unusual for low-income migrant workers to request or be given a single day of annual leave during a working week in Qatar.

"The impact of the Labour Relations Department not being open on weekends is to significantly deter workers from making complaints, as they must either absent themselves from work without informing their employers, risking disciplinary penalties including the deduction of pay, or they have to inform their employers that the reason they are not coming to work is in order make a labour complaint, potentially exposing themselves to retaliation."

If they do get to the office and file a complaint they are usually used to pay for an expert to look into the details of the case which typically costs 600 riyals ($165). Amnesty notes:

"A fee of 600 riyals is equal to a month’s salary for many labourers, and this is particularly problematic given that workers are often complaining about non-payment of wages."

Employers don't necessarily cooperate with the authorities when complaints are investigated and may also take reprisals against the employee – threatening them with criminal charges or eviction from their accommodation – unless the complaint is dropped.

Amnesty recounts the story of one Nepalese construction worker who won a compensation case against his employer following a bus accident for which the employer bore legal responsibility:

"When he came to collect his compensation in the summer of 2012, his employer said he would not be given a ticket [to return home] and the ability to exit until he had given over half of his compensation back to the employer. He refused and his employer subsequently filed a charge against him for stealing money from the company."