Yemen is one of the least known Arab countries and one of the most misunderstood. For outsiders, it can be a baffling place – a wayward republic among the Arabian monarchies, a society that is still largely tribal (and heavily armed to boot), a place where millions while away their afternoons chewing qat and where establishing even the most basic facts about what is going on often proves a daunting task.

For those who are undeterred by this fog of confusion, Yemen's complexity is also what makes it so fascinating and a recently-published book does much to clarify the picture without over-simplifying it. Why Yemen Matters, edited by Helen Lackner, a veteran authority on the country, brings together a collection of essays by a wide range of specialists in a variety of fields, combining local issues with geopolitics.

As the title suggests, part of its purpose is to show that Yemen really does matter and – perhaps more importantly – to consider in what ways it matters. This is where perceptions inside and outside the country start to diverge. For the US, it's all about security: Yemen is a case of drones versus jihadis, and very little else. Yemenis themselves, on the other hand, are preoccupied with more basic issues such as poverty and dwindling supplies of water. 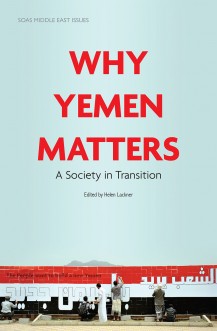 Along with Tunisia, Egypt and Libya, Yemen witnessed an uprising in 2011 which eventually toppled President Ali Abdullah Saleh after more than 30 years in power. It is now in the midst of a difficult political transition brokered by the Gulf Cooperation Council with American and UN backing.

If this succeeds, Yemen might become a model for other parts of the region. If not, as Lackner points out, the consequences of failure "are serious not only for Yemen and the Arabian Peninsula, but also in regional and geopolitical terms, to an extent that is poorly understood by key decision-makers".

In what is probably the book's most controversial chapter, Sheila Carapico juxtaposes two conflicting political strands: the civic revolutionary movement with its aspirations for social justice and better governance, and external forces – primarily the US and GCC states – that view Yemen mainly in terms of a need for security and stability. To the extent that these efforts are aimed at stability rather than social justice, Carapico warns, they run the risk of minimising rather than maximising prospects for democratisation.

Aside from national and international politics, other sections of the book tackle local issues such as the Houthi conflict in the far north and separatism in the south, as well as the effects of migration and dependence on remittances from abroad.

Scarcity of water – for agriculture and human consumption – is becoming a major barrier to economic development. Lackner argues that tackling this properly requires firm management and effective government to "enforce decisions that protect the interests of all Yemenis, rather than bowing to political pressure from powerful interest groups" – something that Yemen currently lacks.

'Why Yemen Matters' arose out of a conference held at SOAS in January 2013, organised by the British Yemeni Society in association with the London Middle East Institute, and its contributors are among several dozen who presented papers there.

Inevitably this results in a variety of approaches and occasionally conflicting views and a few of the topics covered may strike readers as somewhat random – chapters on Yemeni political theatre and the Yemeni community in China, for example. But Lackner's introduction provides some cohesion by setting out the broader context and drawing important themes together.

Topical books about Yemen are comparatively rare so this is a valuable addition, especially in the light of its writers' expertise. Anyone following Yemen's development over the next few years will find it a useful primer. Hopefully, the foreign diplomats and policymakers who are involved in shaping the country's future will learn from it too.

'Why Yemen Matters: A Society in Transition', edited by Helen Lackner, is published by Saqi Books, £21.99. This review first appeared in the  April/May issue of 'The Middle East in London'.