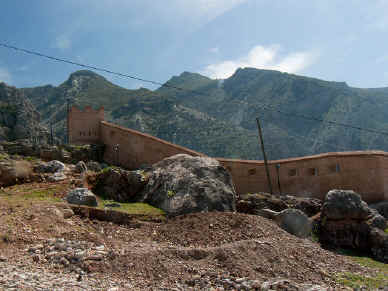 In the article below, Alex Russell looks at renewed debate in Morocco about one of the country's most important (but illicit) agricultural products. The article was first published by Muftah, a website which aims to cover issues and views that are under-represented in mainstream media.

In the latest move in Morocco’s long-standing debate over its production of cannabis, two political parties have submitted draft laws legalising the plant’s cultivation for “therapeutic and industrial” purposes. The Istiqlal Party and the Authenticity and Modernity Party (PAM) have proposed laws that would allow the production of cannabis in five northern, Moroccan provinces: Al Hoceima, Chefchaouen, Ouazzane,Tetouan and Taounate. The draft laws also support the creation of a regulatory agency that would have exclusive rights to sell cannabis.

Although cannabis production has been illegal for most of Morocco’s modern history, the current government has been largely tolerant out of economic necessity. Since 2009, representatives from PAM have called for cannabis’ legalisation. The party organised a parliamentary hearing in late 2013 to examine the benefits of legalisation and the legal and security mechanisms that would accompany such a move.

According to the UN Office of Drug Control’s World Drug Report, cannabis cultivation is far from an insignificant part of Morocco’s economy. Accounting for an estimated 0.57% of the country’s gross domestic product, over 38,000 metric tons of cannabis are produced each year. Although production has decreased over the last decade, Morocco has more land devoted to producing the crop than is found in all other top cultivating countries combined. Every year, 800,000 Moroccans work to cultivate cannabis. For the average cannabis farmer, sales of the crop represent half a family’s yearly income. The majority of these producers are located in four of the five northern provinces affected by the proposed law.

Combined, Istiqlal and PAM account for over a quarter of seats in Morocco’s lower house of parliament. In order for their proposed legislation to receive the necessary number of votes, the two parties will inevitably need support from the lower house’s largest faction, the Islamist Justice and Development Party (PJD), which controls a quarter of seats. In a June 2014 statement, a PJD representative called cannabis’ proposed legalisation an “unacceptable electoral escalation.” The party has, however, demonstrated willingness to discuss the matter with those advocating the law.

By regulating the sale of cannabis, Morocco will be able to cut down on illegal trade routes and smuggling, while increasing formal trade with external markets, like Europe. Creating a state agency to control cannabis’s sale will also allow the government to increase its tax income by tapping into a previously off-limit market. But, with Morocco’s high levels of corruption, a state monopoly on sales may only serve the interests of elite businessmen and government officials, while diverting profits away from small farmers.