LAST WEEKEND Houthi fighters took over key parts of the Yemeni capital, Sanaa, and celebrated with a massive fireworks display (see video above). Government security forces are now said to be cooperating with them in guarding the city.

This extraordinary turn of events has received scant attention from the media – partly because eyes are focused on ISIS, Iraq and Syria, but also because the situation in Yemen is very complex and it's difficult to establish precisely what is going on. Analysts have also been reticent – again, not surprisingly, since even seasoned Yemen-watchers are unsure what to make of it.

However, two things can be said with a fair degree of certainty. First, this is primarily a local conflict and those who claim otherwise are either mistaken or pursuing a particular agenda. It does have a regional dimension (mainly in the form of Saudi/Sunni and Iranian/Shia rivalries) but, for now at least, that is not especially significant.

Labelling the Houthis as "Shia" and "Iranian-backed", while factually correct, is somewhat misleading. The Houthis are indeed Shia but they belong to the Zaidi sect which is different from the predominant type of Shiism practised in Iran. Iranian clerics thus tend to limit their support for them, on theological grounds.

The extent to which the Houthis have or have not received tangible help from the Iranian government is a matter of dispute, though as Ranj Alaaldin pointed out a few years ago, they don't particularly need it:

"The Houthis require no military training from outside, given that most members have been through the state military service system, and require no arms, with weapons coming from a black market that underwent a boom after the 1994 Yemeni civil war.

"The Yemeni government did say it had seized an Iranian-crewed vessel containing weapons near the Houthi stronghold in the north. Yet its failure to parade the seizures made it difficult to confirm and verify its claims. Though there are allegations of Iranian financial support for the Houthis, Yemeni officials have admitted the Houthis are more likely to be financed by non-governmental Shia religious and economic actors.

"Further, Yemen is not geographically convenient for Iran; notably, the Houthis have offices in the holy Shia centre of Najaf [in Iraq] that could serve as a contact point with Tehran (though there is nothing to suggest this is the case)."

Nevertheless, it suited the Yemeni government of Ali Abdullah Saleh to characterise the Houthis as proto-Hizbullah footsoldiers for Iran, since this helped to justify military action against them as well as lessening the need to take their grievances seriously.

The origin of the Houthis as a movement can be traced back to the early 1990s and the growth of Wahhabi/Salafi missionary activities in the Zaidi heartland. At a conference in London last year, veteran Yemen expert Shelagh Weir explained:

"Until the 1980s, all the highland population of the governorate of Saada were Zaidi Shiites and of those about 5% were sayyids, members of the Zaidi religious elite who claim descent from the Prophet and from whom the imams [rulers of Yemen] were formerly chosen.

"One of the most prominent and respected Zaidi religious scholars was Badreddin al-Houth, the father of Hussain al-Houthi [after whom the Houthi movement is named]."

"During the 1990s the growth of socially-divisive salafism within the heartlands of Zaidi Islam was encouraged and funded by officials and business interests in Saudi Arabia and in Yemen – including President Ali Abdullah Saleh.

"Salafis increasingly mocked or questioned the beliefs and rituals of the Zaidi majority, threatening them in mosques and accusing them of wanting the return of the imam [i.e. the end of the republican system] – though this was publicly denied by the Zaidi clerics."

Inevitably, the aggressive salafi/Wahhabi proselytising triggered a response from the Zaidi side. Hussain al-Houthi founded his Believing Youth movement – initially a local effort to defend Zaidi rights in the Saadah region. "Gradually it expanded to provide educational and social services and became increasingly politically vocal in opposing President Saleh's perceived pro-American stance after 9/11 and the 2003 invasion of Iraq," Weir said.

"A number of violent incidents took place between Houthi supporters and soldiers. Then in 2004 government security forces assassinated Hussain al-Houthi, allegedly during an attempt at a mediated peace settlement.

"This extrajudicial murder not only violated the cherished tribal ideal of settling disputes by negotiation through respected intermediaries but it also sabotaged the possibility of an early resolution of the Houthi conflict and stoked its escalation." 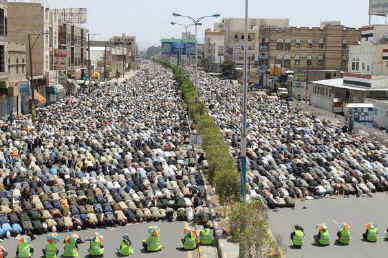 The Houthis, however, proved remarkably resilient and, as Weir noted, it would be a mistake to assume they are just a tribal rabble. She pointed out that the tribes in the area, far from being anarchic, have their own traditional systems of law and governance. They exist in a symbiotic relationship with the Yemeni state, coordinating with local government officials such as governors, sharia judges and police, but they are also strongly self-reliant. In the absence of government help, for example, they constructed much of the rudimentary local infrastructure themselves.

"Tribes and their leaders are not anti-state," Weir said. "However, their compliance with state officials has always been conditional on fair governance."

"Where officials or regimes have been corrupt or oppressive, have flouted their cherished values, or threatened their welfare or vital interests, they have opposed them ... This also chimes with one of the basic tenets of Zaidism – khuruj, the right and duty to oppose unjust rulers."

A recent article by Charles Schmitz of the American Institute of Yemeni Studies traces the rise of the Houthis from modest beginnings to a position where they now seem able to dictate terms to the Yemeni government.

THE SECOND thing that can be said about this with reasonable certainty is that the Houthis' entry into Sanaa has altered the power balance in Yemen, at least for the foreseeable future.

The main loser so far seems to be Islah, the Islamist/conservative party which has a variety of factions ranging from Tawakkul Karman, the Nobel Peace Prize winner, at one end of the spectrum, to Abdulmajid al-Zindani, listed by the US as a "specially designated global terrorist" at the other. Somewhere in the middle are two important Hashid tribal figures, Sadeq al-Ahmar, his multi-millionaire brother, Hamid al-Ahmar.

In July, Houthi fighters captured the city of Amran which, as Schmitz wrote in another article, was a move of great significance:

"The [Houthi] advance dislodged the al-Ahmar family’s grip on the leadership of the Hashid tribal confederation, a central political pillar of the Yemeni Republic since 1962, and threatens the survival of the Islah Party itself."

The Houthi advance also seems to have eliminated an especially problematic figure: General Ali Muhsin al-Ahmar, who is reported to have fled abroad. For many years, Ali Muhsin was regarded as President Saleh's right-hand man, though they eventually fell out and in 2011 Ali Muhsin declared himself a supporter of the uprising against Saleh's regime. Since then, Saleh's successor as president, Abd Rabbou Mansour Hadi, has been trying to sideline him, and few will be sorry to see him gone.

Saleh himself has been remarkably quiet during the Houthi advance – which inevitably raises suspicions that he could be up to something. There have been suggestions that he is collaborating with the Houthis, though these have not been substantiated. 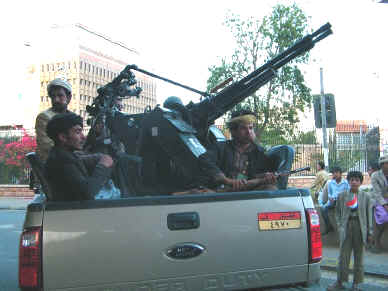 Houthis chew qat while guarding the Central Bank in Sanaa with an anti-aircraft gun. Photo posted by @ionacraig

So far, President Hadi's position does not seem to be threatened by the Houthis, though he is having to restructure his government to accommodate them. Some attribute the Houthis' advance to his weakness, but Schmitz argues that allowing them to make gains could have been a deliberate ploy:

"Over the last six months, a pattern emerged: Houthi fighters would make incursions into new territory, President Hadi would send a delegation to negotiate a settlement, and the Houthi leadership would exploit the settlement to advance further its control of northern Yemen.

"President Hadi appears to be allowing the Houthi advances to hurt the Islah Party as part of a major reshuffling of the political landscape in Yemen."

The good news for the US is that the Houthis – officially known as Ansar Allah ("The Supporters of God") – are sworn enemies of al-Qaeda, on religious grounds. The bad news is that "Death to America" is also one of the Houthis' slogans, though so far they have been careful not to attack the US embassy.

Meanwhile, the effect of events in Sanaa on the southern separatist movement, al-Hirak, remains to be seen.

Because of widespread dissatisfaction with the transitional government, the Houthis at present enjoy a good deal of popular support (but they have plenty of enemies too). In the words of Adam Baron, a journalist who was recently expelled from Yemen:

"They’ve been able to transcend their origins in Zaidism, a nearly exclusively Yemeni branch of Shi’a Islam and that – rather than their sectarian identity – has proven the key to their success; their most recent demands – the reversal of a decision to remove fuel subsidies and the replacement of Yemen’s prime minister and his cabinet – have wide-ranging support from all Yemenis. And, regardless of the group’s alleged ties to Iran ... the Houthis’ success is rooted in their ability to understand and capitalise on the local political situation and the concerns of the average Yemeni."

Since they swept into Sanaa. the Houthis have been making the customary noises about democracy and good government, though their rise to power through force does not bode particularly well. Schmitz comments:

"The Houthi movement today must choose between pressing ahead militarily and provoking a bloody civil war in the capital or using its considerable political capital to form a wider, more inclusive and legitimate government in Yemen, to begin to address Yemen’s pressing problems. The movement appears to waiver unpredictably between the two options."