Fake Twitter accounts which have been used to promote a controversial human rights organisation are now being used to target me after I criticised the organisation in blog posts.

A series of tweets posted over the weekend claimed that I was being paid $50,000 a year by the Qatari government and had been expelled from Yemen for a sexual offence.

These claims were widely retweeted by fake Twitter accounts – accounts which had earlier publicised a speech given by Loai Deeb, president of the Global Network for Rights and Development (GNRD) in Geneva last week.

A new tweet which appeared overnight, and has since been retweeted more than 1,000 times, continues in a similar vein to the others: 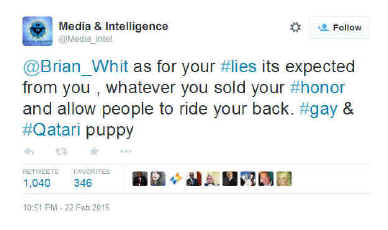 The accounts doing the retweeting appear to be used mainly for marketing purposes and some of them are obvious fakes.

Readers are welcome to explore other Twitter accounts involved in this retweeting. Please let me know if you find anything of interest. Presumably someone is paying for the retweets and I would welcome any information that could help identify who is paying.

Over the last few months I have written a series of blog posts about GNRD which explain why it is a peculiar human rights organisation.

Last week GNRD held a conference in Geneva on human rights and counterterrorism, and videos of some of the speeches were later posted on YouTube.

The 27-minute speech in Arabic by GNRD's president, Loai Deeb, has supposedly been viewed on YouTube 325,318 times in the six days since it was posted. On Facebook it has been "liked" 47,532 times. On Twitter, a link to the speech has been retweeted 5,753 times and favourited 3,702 times.

The apparent popularity of Deeb's speech is remarkable considering that none of the other speakers has come anywhere close to matching his viewing figures. The speech by Khaled al-Shaar, a Bahraini MP, for instance, has had a mere 147 views while onthe speech by Anatoly Kulikov, a Russian army general, has been watched only 32 times.

Loai Deeb was formerly head of the so-called Scandinavian University, a fake educational institution (see photograph). The "university" boasted of having 175 professors and more than 300 lecturers but turned out to have no staff at all and was eventually closed under the threat of legal action by the Norwegian authorities.
Posted by Brian Whitaker
Monday, 23 February 2015