Last November various Yemeni political figures were flown to Brussels for a conference which had been hailed by its organisers as "a real opportunity to achieve an all-inclusive national reconciliation".

Since then, of course, the situation in Yemen has gone from bad to worse and it's difficult to see what the Brussels conference could have hoped to achieve beyond the self-aggrandisement of its organisers when so many other attempts at reconciliation had failed.

GNRD is a controversial but well-funded organisation headed by Loai Deeb, a lawyer who previously ran a fake university in Norway. Meanwhile the head of NCHRDD, according to the Yemen Times, is Ahmed Saleh al-Essi who became controversial in Yemen both for his business activities and (until recently) his domination over the Yemeni Football Association.

In a press release at the end of the Brussels conference GNRD declared the event a success. Participants signed a document called the "Brussels Declaration for Yemeni National Reconciliation" and GNRD's vice-president, Abozer Elligai, promised that GNRD would follow through and ensure proper implementation of each provision in the declaration".

The press release gave no details of the document's content and the text has not been published on GNRD's website. However, Yasin al-Tamimi, a political analyst at the Yemeni government news agency described the Brussels agreement as "worthless in terms of its substance and content". He told the Yemen Times: "It contributed nothing to the Yemeni reconciliation process. We as a country didn't benefit from this meeting." 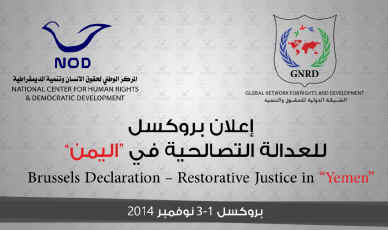 The Yemen conference in Brussels. Photo:GNRD

None of that augurs well for GNRD's latest venture, which is even more ambitious. On February 16 and 17 it is holding another conference – this time in Geneva – where "top government officials and other leaders from more than 40 countries" (according to the press release) will discuss a draft document which GNRD is calling the "International Convention on Balancing Counter-Terrorism and Human Rights".

In a video posted on YouTube (see above) Victoria Brannan, described as a legal researcher for GNRD, explains the background:

"Over a year ago the Global Network for Rights and Development launched an international initiative to combat terrorism and strike a balance in order to preserve human rights in the context of counterterrorism operations ...

"This international initiative was the result of an in-depth study by GNRD which focused on the changes that were occurring in the methods of practising terrrorism.

"Over the past year GNRD has consulted and communicated with all countries, as well as international and regional organisations. While GNRD has received a positive response from many countries, there are some countries that are suffering from the consequences of terrorism today that were unwilling to cooperate."

Referring to the plans for next week's conference, Ms Brannan continues:

"At this conference GNRD will put forward a comprehensive international convention to fight terrorism and strengthen pre-emptive prevention mechanisms. The conference will also detail the procedures for signing and joining this convention which aims to produce the 'Council for Countering Terrorism', an international body that enjoys authority and flexibility to deal with terrorism and eliminate it completely.

"Further, the international council will aim to preserve human rights in the context of fighting terrorism, working continuously to eliminate the causes that help the spread of terrorism, respond to early warning signs, ensure states are complying with their ethical responsibilities to face terrorism collectively and maintain the civilised values of humankind."

How to protect human rights while combating terrorism is certainly an important question, and one that has been much debated already. As with the Yemen conference last November, though, it's unclear whether GNRD has anything of substance to bring to the table. The talk of setting up an international council to "eliminate" terrorism sounds fanciful, to say the least.

Furthermore, GNRD's claim that "top government officials and other leaders from more than 40 countries" will attend its Geneva conference seems more than a little exaggerated. Its list of "VIP guests and speakers" names only two serving government ministers – the interior minister of Kosovo and the foreign minister of Ghana (the latter still to be confirmed).

Considering that GNRD has some peculiar ideas about human rights, it will also be interesting to see what its draft convention proposes by way of protecting them.

GNRD has a particularly favourable view of human rights in the UAE – in contrast to Human Rights Watch and the US State Department, both of which have been very critical of the UAE's performance.

GNRD produces an international league table of human rights and the most recent one (rather incredibly) ranked the UAE in 14th position worldwide – just one place behind the UK and far ahead of any other Arab country. Following criticism in social media, that league table has now been deleted, though another one is promised in 80 days.

Articles on GNRD's website also portray the UAE's human rights record in a highly positive light. One article comments favourably on the role of women in the UAE. Others talk about the UAE's "achievements in the field of promoting and protecting the family and its members", also praising the UAE for its environmental efforts, and for the way it cares for the disabled and protects the rights of children.

More recently, GNRD has been developing a relationship with the Sisi regime in Egypt. Last year it took part in a joint mission monitoring the presidential election which legitimised General Sisi's seizure of power – and produced an enthusiastic report.

It said: "the Egyptian people have experienced a unique process toward democratic transition, and despite the fact that minor errors and inaccuracies occurred, these do not shed a negative light on the overall results of the electoral process". It continued:

Since then, GNRD has become one of only five international organisations approved by the Egyptian authorities to monitor the country's forthcoming parliamentary elections.

Last December, in connection with its human-rights-and-counterterrorism project, GNRD organised a meeting at the European parliament (where it is registered as a lobbying organisation). A report of the discussion is here.

A GNRD press release from last July gives a few more clues about the ideas behind the project. After listing some ways that counterterrorism measures can violate people's rights, it notes that there are disagreements between countries over which individuals and organisations should be classified as "terrorist".

It goes on to propose an "internationally agreed mechanism" to resolve these differences:

"The aim ... would be to identify the parties responsible for human rights violations and terrorist activity and agree internationally on common 'black' and 'white' lists of organisations and individuals.

"This would ensure common position over the labelling of suspected terrorists ... and prevent international tensions and conflicts that result from differences in listing terrorists and terrorist organisations."

Differences often arise because of the way some governments – especially in the Middle East – label those they disapprove of as "terrorists", even when the usual definitions of terrorism don't apply to them. In Saudi Arabia, for example, "calling for atheist thought" is officially classified as a terrorist act.

GNRD's support for an internationally agreed terrorist list raises the question of how that might be reconciled (or not) with its links to the UAE and the Sisi regime in Egypt, both of which have been playing the anti-terrorism card in their political campaign against the Muslim Brotherhood.

Last November, for example, the UAE issued a list of 83 organisations which it has designated as "terrorist". The list caused some surprise because it included several organisations based in the west which are not classified as terrorist by governments in the US or Europe. Meanwhile, the right-wing American Frontpage Mag praised the UAE's list as "unrivalled" and "superior to the lists developed by the United States, the European Union, the Russian Federation and the United Nations".