Last week brought more embarrassment for the UAE-linked Global Network for Rights and Development (GNRD) following the revelation a few months ago that its founder/president had previously run a fake university in Norway. On Thursday, a court in Belgium gave GNRD's extravagantly-titled "High Commissioner for Europe" a suspended prison sentence and banned her from public office for five years.

The "High Commissioner" is Anne-Marie Lizin, a veteran Belgian politician whose GNRD duties include overseeing GNRD-W, a newly-established department concerned with the rights of women and girls. 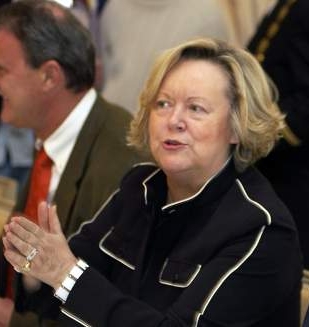 In her political career Lizin served three years as president of the Belgian senate and is currently its honorary president but the criminal case relates to her time as mayor in the historic town of Huy – and the use of municipal employees (who in any case ought to be politically neutral) for distributing election literature on her behalf.

The arrangement was that employees who canvassed for Lizin during working hours would not have any pay deducted or be required to make up the lost time. This meant the municipality, in effect, would be subsidising Lizin's campaign.

Last Thursday, an appeal court in Liege confirmed the sentence imposed earlier on Lizin by a lower court. Lizin is planning a further appeal – to Belgium's Supreme Court – and the ban on holding public office will not take effect until all legal avenues have been exhausted.

Lizin, who was expelled from the Socialist Party in 2009, clung to her mayoral post in Huy for 26 years and left it acrimoniously. Having been forced to resign amid a series of scandals, she then got into a dispute with the new mayor, Micheline Toussaint, about parking spaces behind the Town Hall which resulted in Lizin ramming Toussaint's car (reports here and here).

Belgian media also reported that after leaving office Lizin had retained a mobile phone provided by the municipality. This only came to light when the municipality received a 5,000 euros bill which Lizin reportedly agreed to pay after being threatened with legal action.

Next Tuesday, Lizin is due to speak at a GNRD event in Geneva, held on the sidelines of the Human Rights Council. According to the blurb, this will focus on the outcomes of a conference about human rights and counter-terrorism which GNRD held in Geneva last month (and which I discussed in an earlier blog post). 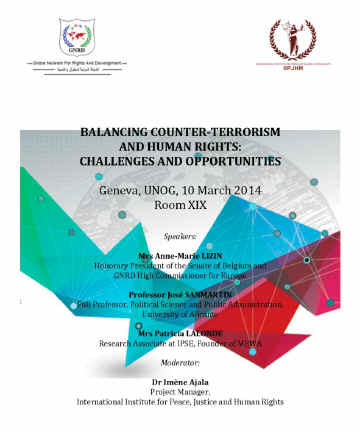 GNRD's invitation to next Tuesday's event

Lizin also spoke at the February conference and the text of her speech (in French) is here. She writes frequently about her GNRD activities on her website.

Following a previous blog post about GNRD and another about the International Gulf Organization, a "human rights" group that appears to be a front for the Emirati government, supporters of GNRD and the UAE launched a campaign of online harassment directed against me:

For more details of this harassment, see my earlier blog post.

This might seem a very strange way for supporters of a human rights organisation to behave, but GNRD does say on its website that it "uses out of the ordinary and unique approaches" in its work.
Posted by Brian Whitaker
Sunday, 8 March 2015