I have been writing rather a lot about the Global Network for Rights and Development (GNRD) lately. It's a story with some strange twists and turns, from the discovery that its founder/president once ran a fake university in Norway, to the sentencing of its "high commissioner" for electoral malpractice in Belgium – plus, of course, the use of fake internet accounts to harass me for writing about it.

The latest twist is no less strange. Take a look at this item on GNRD's website. It reports that GNRD "attended human rights training workshops" in London on February 28.

We're told in the article that these workshops have provided human rights training for "dozens of Arabs and Kurds from Syria, Iraq and Iran". We're also told that after an informal start about a year ago, the workshops have now become more formal, with teaching materials in several languages and certificates issued to trainees.

But who exactly is responsible for this training? GNRD's article says:

"The workshops were held at the American writer and philosopher L Ron Hubbard’s museum in London, which was home to the famous Irish playwright George Bernard Shaw in 1881.

"They were run by Lord Duncan McNair, who is a member of the Liberal Democrats Party, which is one of the two parties in the British coalition government."

Either GNRD was totally hoodwinked or it is being disingenuous here. L Ron Hubbard, as GNRD omits to mention, was founder of the Church of Scientology.

Furthermore, if you look up Lord McNair on Google, you will find that he is a member of the Church of Scientology. He has said so himself, in the House of Lords. Critics have described him as "Scientology's representative in parliament".

McNair's wife, Lady Margaret, is patron of the Citizens Commission on Human Rights, a Scientology front organisation which campaigns against psychiatry. 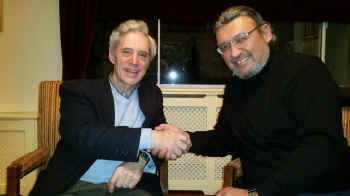 Lord McNair with GNRD representative
at the Hubbard building in London

Besides GNRD, an Iranian exiles group called Tribon-e-Azad has also received human rights training from the Scientologist Lord. Tribon-e-Aza has organised at least 10 events at the Hubbard building in London during the past year – with McNair billed as the speaker for most of them.

A few videos from these events can be found on the group's YouTube channel and the group also advertises the workshops on its website. 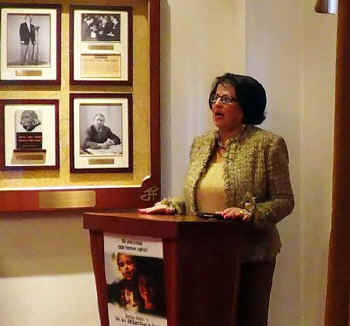 Gity Kaveh, founder of Tribon-e-Azad, speaks during
a session in the Hubbard building

As with GNRD, Tribon-e-Azad is either unaware of the Scientology connection or concealing it. The website explains that Lord McNair was already working with an organisation called Youth for Human Rights and was thus able to make use of its "platform" for the Iranians' training. At least six of the workshops carried the title "Youth for Human Rights".

Youth for Human Rights is another Scientology front organisation.

GNRD's article about the training workshops ends by saying Lord McNair has "expressed his desire to cooperate with GNRD" in the area of human rights. I do hope so. It should be fascinating.