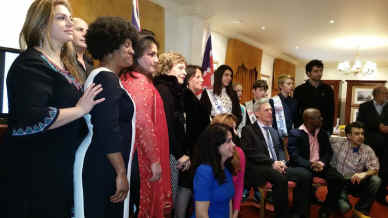 The Church of Scientology continues to develop its secretive relationship with the Global Network for Rights and Development (GNRD).

In a blog post on Monday, I noted that GNRD had attended "human rights training" workshops in London conducted by Lord Duncan McNair, a prominent British scientologist, and held in Fitzroy House – a museum dedicated to the memory of Scientology's founder, L Ron Hubbard.

On its website, GNRD published an article about the training but without mentioning the word "Scientology". It described Hubbard as an "American writer and philosopher" and, equally innocuously, described McNair as "a member of the Liberal Democrats Party" in Britain.

GNRD was back at Fitzroy House on Sunday, for a celebration of International Women's Day which it says was "attended by a large number of activists and women's rights advocates from around the world".

There were numerous Women's Day events in London last weekend, including a march led by female celebrities, and it does seem odd that GNRD should have latched on to one run by the Scientologists rather than more mainstream organisations. Once again, the report about this event posted on GNRD's website completely avoids the "S"-word.

Scientologists often operate surreptitiously, and it is unclear whether GNRD is trying to conceal its involvement with them or just very naive. Inside Fitzroy House the walls are covered with Hubbard memorabilia so it would be surprising if GNRD had not enquired further about the man and his work.

Similarly, GNRD gives an approving mention in its article to the role played by "Youth for Human Rights International" in Sunday's event but doesn't seem to have done even a basic Google check on the organisation – which would have shown that it is a front for the Church of Scientology.

GNRD states on its website that it uses "out of the ordinary and unique approaches" to achieve its goals, and it is certainly an unusual kind of human rights organisation.Loai Deeb, its founder/president previously ran a fake university in Norway. Also, Anne-Marie Lizin, its "High Commissioner for Europe", has been given a suspended sentence and banned from public office for five years because of electoral malpractice in Belgium.