Female recruits welcome, up to a point

In 2009, Fatima Zohra Ardjoune became the Algerian army's first female general, and since then four more women have risen to the same rank.

These appointments followed a presidential decree in 2006 which, as part of a modernisation plan, established the principle of gender equality in the People's National Army (PNA). But the decree proved a lot easier to issue than to implement. Although it seems to have been intended largely as a PR exercise – to portray the army as a progressive institution open to all members of society – it has succeeded in bringing some tangible benefits for women in the military ... but only up to a point. 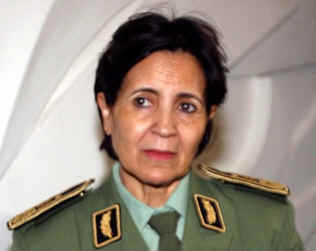 Dalia Ghanem-Yazbeck discusses the progress so far (and its shortcomings) in a paper published last week by the Carnegie Middle East Centre.

On the plus side, women accounted for 18% of all recruits admitted to Algeria's cadet academy in 2013 and almost a third of new officers at the Naval Academy were female. At the same time, though, women are prevented from achieving full equality by what Ghanem-Yazbeck describes as "protective paternalism" and "benevolent sexism":

"Women in the Algerian army are portrayed in contradictory ways: they are seen as commendable symbols of gender equality, and yet the manner of their representation reveals them to be sexualised and marginalised. The traditional gender-based division of labour – with female military personnel placed mostly in subordinate or support positions where they remain aides to their male counterparts – is maintained."

One way of judging attitudes is to look at how women are represented in the army's official magazine, El Djeich. On average, Ghanem-Yazbeck says, there are only two pictures of women for every 100 pages:

"Women are often presented in what are considered female positions, such as nursing, that 'suit their natural dispositions', to quote El Djeich. In addition, they are continuously feminised to the point that it is quite hard to find a picture of women without makeup on (even though it is not heavy makeup), while men are often portrayed with camouflage or dirt on their clothes and faces."

As far as division of labour in the army is concerned, women are "concentrated in what are seen as suitable jobs", such as those in the communications department:

"Some work in telephone units as switchboard operators, others work as mapmakers, and still others are translators or data-entry personnel. The numbers in the PNA magazine confirm this trend: according to El Djeich, the army’s information and communications department employs 17% of the military women and 51%t of the civilian women assimilated into the military.

"Women are massively present in the health department, with 17% of the total number of military health personnel, including 6% who are military. [Fatima Ardjoune, the first female general, is actually a haematologist in a military hospital.]

"A majority of women occupy educational roles such as instructors, researchers, or scientists."

This, Ghanem-Yazbeck notes, broadly mirrors trends in the gender division of Algeria's national labour force, but she goes on to argue that excluding military women from combat roles contradicts the army's equality policy and prevents women from rising to positions of prestige and power.

Women are allowed to take part in field exercises but the rules for their participation are ambivalent, as a former colonel explained:

"If a military woman wants to do the same drills as men, she can do so, but only if she wants to ... but it is useless ... because she does not need it. It is up to her. It is also up to the instructor's personality – if he considers women equal to men, he will ask her to perform the training exactly like the men ... but he cannot oblige her. Women have the right to decline participation in a drill because they are women. A man cannot have any excuse."