Will frenzy over Iran get Saudis off the hook? Saudi Arabia is surely relieved. Less than a week after its coalition warplanes committed the worst atrocity of the Yemen war so far, killing at least 140 people at a funeral and injuring more than 500, the heat is off and the media focus has shifted to Iran.

The bombing in the Yemeni capital last Saturday has been described by Human Rights Watch as "an apparent war crime" and according to criteria set by Britain's foreign secretary, Boris Johnson, it was "unquestionably" a war crime.

Alarmed by this development, the US warned that its support for Saudi Arabia was "not a blank cheque" and announced that it had "initiated an immediate review of our already significantly reduced support to the Saudi-led coalition". Evidence from the scene of Saturday's massacre indicates that at least one American-supplied bomb was used in the attack.

Fortunately for the Saudis, this may be quickly forgotten amid renewed media frenzy about supposed Iranian machinations.

In the Red Sea earlier this week, three missiles were fired harmlessly towards the an American warship, the USS Mason. The missiles had been launched from Yemeni territory controlled by Houthi/Saleh forces – whom the Saudis have been bombing since March last year. Although the Houthis deny responsibility, the missiles were probably intended as a reprisal for the attack on the funeral.

Almost immediately, US media reports began claiming – on the basis of very little evidence – that the missiles involved had been supplied by Iran. On the right-wing Commentary website, Max Boot (described by Salon magazine as "a hard-line war hawk and self-declared 'American imperialist',") demanded action:

"US warships do not routinely come under attack. When they do, it’s called an act of war. So someone has committed an act of war against the United States. The proximate culprit appears to be the Houthi movement, which is mad at America for backing an assault on it by Saudi Arabia and the United Arab Emirates. Just last week, an Emirati ship was destroyed off the same part of the Yemen coast. But the Houthis are hardly lone actors. They do not manufacture their own missiles. They get them from Iran. That suggests this could be seen as an act of war by Iran against the United States."

Overnight on Wednesday, the US struck back at the Houthis, firing Tomahawk cruise missiles at three radar stations on Houthi-controlled Yemeni territory and apparently destroying them. Needless to say, there are now claims that the radar stations had also been supplied by Iran (see, for example, this report on the wildly sensationalist Israeli website, Debka).

Among those celebrating the American attack was Walid Phares, Donald Trump's "counterterrorism advisor", who tweeted: "At last! The US destroyed Iran backed Houthi controlled radar sites on Yemen coast."

The latest development is a series of (mainly American) news reports suggesting Iran is about to engage the US in a naval confrontation:

Under the headline "Iran Deploys Warships Off Yemen After US, Houthis Trade Fire" Fox News says:

Iran sent the ships to the Gulf of Aden, one of the world's most vital shipping routes, "to protect trade vessels from piracy," Iran's semi-official Tasnim news agency reported.

Still, analysts warn the move could ratchet up the danger to U.S. forces in the region. U.S. intelligence has linked Iran to the funding of Yemen's Shiite rebels, who have also waged a series of attacks against Saudi Arabia, a longtime U.S. ally.

There are major problems with this story, however. Geography has never been one of Fox News's strong points, but the American warships are in the Red Sea, alongside the western coast of Yemen. The Iranian warships are heading for the Gulf of Aden, which runs along Yemen's southern coast, so unless there's a change of plan the two naval forces are unlikely to meet. 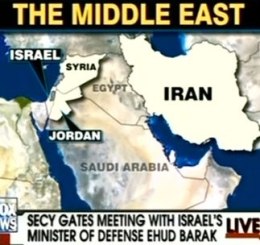 An even bigger problem with the story is that – contrary to what Fox News says – the Iranians did not deploy their warships after the Americans and Houthis exchanged fire: they deployed them before.

The Iranian warships, the 48-year-old British-built frigate Alvand and the supply ship Bushehr which is only slightly newer, are on a pre-planned tour that will take them past Yemen and then down the east African coast where they are due to make a port call in Tanzania. Weather permitting, they will continue south around the Cape of Good Hope and into the southern Atlantic. The Atlantic portion of this trip was reported in Iranian media last month, well before the recent escalation in the Red Sea.

Of course, the Iranians could still change the plan and divert their ships into the Red Sea but to suggest they set sail towards Yemen because of developments there is sheer nonsense.