Two airstrikes hit a large funeral gathering in the Yemeni capital, Sanaa, on Saturday killing more than 140 people and injuring at least 525, according to the UN's humanitarian coordinator in the country. This was the worst single attack of the war so far and it is difficult to construe it as anything other than a war crime.

In a strongly-worded statement the UN coordinator, Jamie McGoldrick, "unequivocally" condemned the airstrikes, describing them as "a senseless act". The statement continued:

"The humanitarian coordinator reminds all parties to the conflict that under international humanitarian law, they are obligated to protect civilians and civilian infrastructures. He calls for an immediate investigation into this incident.

"The international community must exert pressure and influence on all parties to the conflict to enure civilians are protected. This violence against civilians in Yemen must immediately stop."

The US announced an "immediate review" of its military support for Saudi Arabia. A statement from the US National Security Council said:

"US security cooperation with Saudi Arabia is not a blank check. Even as we assist Saudi Arabia regarding the  defense of their territorial integrity, we have and will continue to express our serious concerns about the conflict in Yemen and how it has been waged.

"In light of this and other recent incidents, we have initiated an immediate review of our already significantly reduced support to the Saudi-led coalition and are prepared to adjust our support so as to better align with US principles, values and interests, including achieving an immediate and durable end to Yemen's tragic conflict."

So far, there has been silence from the British Foreign Office. Apart from the US, Britain is Saudi Arabia's other main arms supplier. The British government, together with pro-Saudi interests in the UK, has been fiercely resisting calls to halt arms sales pending an independent investigation into reported war crimes in Yemen.

At the moment, the British government is especially nervous about offending the Saudis because it is hoping expended arms trade with the Arab Gulf states will help to repair some of the economic damage caused by its plan to leave the EU. During a recent visit to London the Saudi foreign minister held out the prospect of a free trade deal between Britain and the GCC countries – Bahrain, Kuwait, Oman, Qatar, Saudi Arabia and the UAE.

Saudi Arabia's first official comment on the funeral attack was a categorical denial: "Absolutely no such operation took place at that target." Nobody in Sanaa appeared to believe it and subsequent Saudi statements have not repeated the claim.

The current Saudi position is that its forces "have clear instructions not to target populated area and to exert all efforts to avoid civilians any risks [sic]". This appears to be paving the way for a claim that the funeral was not the intended target of either strike.

Overnight, the Saudi government news agency issued a series of statements "correcting" and amending each other. One, issued at 22.29 GMT on Saturday, included the following sentence:

"The coalition will immediately investigate this case along with Joint Incidents Assessment Team (JIAT) in Yemen and experts from the United States who participated in previous investigations."

A revised version, issued at 08.10 GMT on Sunday, amended this to say:

"The Command of Coalition Forces will immediately investigate this case and the investigation team will seek to benefit from the experiences of the American side and the lessons learned in such investigations."

Hundreds of people had gathered at Qaa al-Kubra, a large community hall in Sanaa, to pay their last respects to Ali al-Rowaishan, the father of Jalal al-Rowaishan who is – or was – interior minister in Yemen's Houthi-controlled northern government. According to unconfirmed reports, Jalal al-Rowaishan died in the attacks along with Abdul-Qader Hilal, the mayor of Sanaa.

It's likely that other senior Houthi/Saleh figures were present – which could explain why the hall was targeted. But Adam Baron, who reported from Yemen for several years until 2014, commented on Twitter that funeral and weddings in Yemen "typically attract people from even opposing factions", and added that the Rowaishan family itself is divided in the current conflict. Baron said it's also worth stressing that large numbers of civilians, including children, would have been present.

The video above shows smoke rising from the hall after the first strike when it is suddenly hit by a second strike.

The funeral massacre is likely to put more pressure on the British government to end its largely uncritical support for Saudi Arabia's intervention in Yemen.

Until July, the British government had repeatedly said "we have assessed that there has not been a breach" of  international humantarian law by the Saudi-led coalition in Yemen. On the last day of parliamentary business before the summer recess, the government quietly "corrected" all these statements, amending them to say "we have not assessed that there has been a breach".

More recently, a cross-party parliamentary committee produced a draft report calling for a suspension of arms sales. One of its key sentences said:

"The weight of evidence of violations of international humanitarian law by the Saudi-led coalition in Yemen is now so great that it is very difficult to continue to support Saudi Arabia while maintaining the credibility of our arms licensing regime."

Committee members who support continued arms sales to the kingdom, led by Crispin Blunt (Conservative) and John Spellar (Labour), then tabled more than 130 amendments to the draft – which included removing the call for a suspension of sales.

When it appeared that these amendments would be rejected, Blunt and others walked out of the committee. This made the meeting inquorate, with the result that the report could not be finalised and officially published. 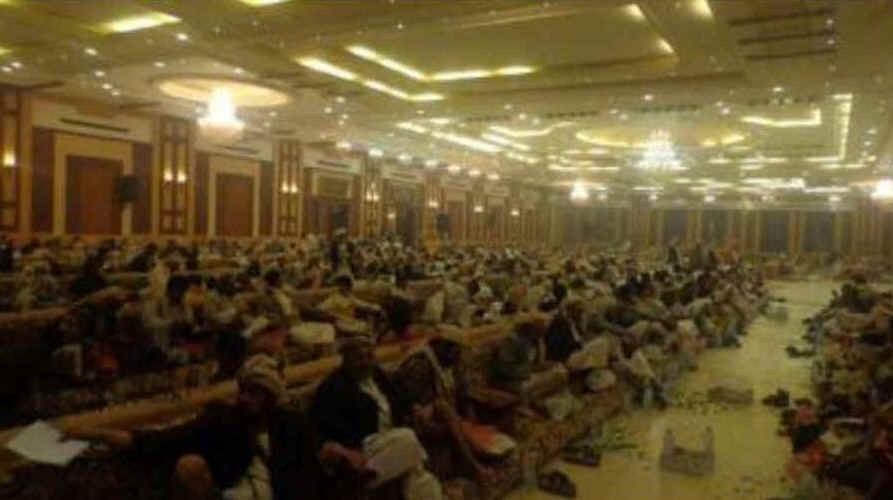 Above: picture posted on Twitter which is said to have been taken inside the hall shortly before the attack. Below: the hall after the attack. 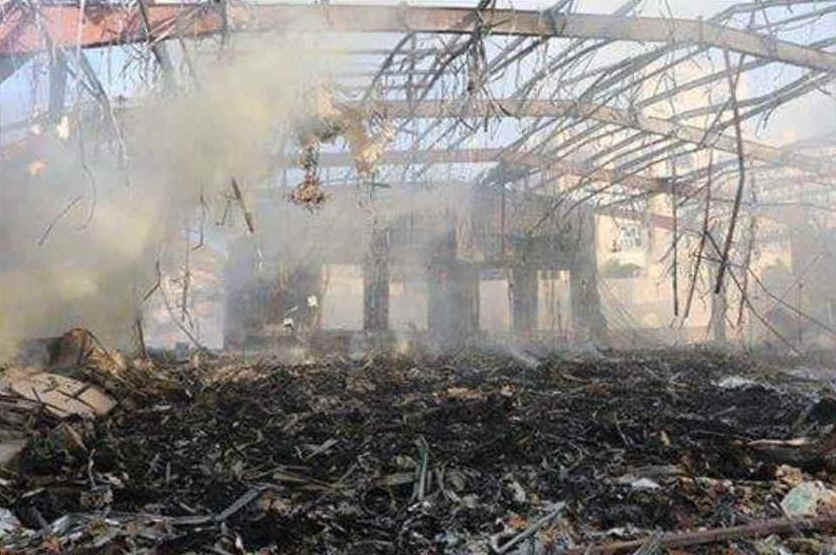