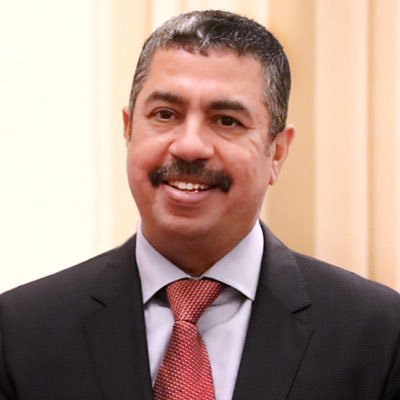 The war in Yemen has reached a point where all parties now want to halt the fighting, former vice-president Khaled Bahah said on Monday. But he warned that if they fail to seize the moment there may not be another opportunity for six months.

The latest peace efforts are focused around a road map produced in October by the UN special envoy. "We have to bring all parties [together] for discussion of that initiative," Bahah said.

"If the legitimate government or the other party in Sanaa have an alternative that is better than the solution brought by the UN they [should] produce it," he continued. "But there is no way other than that all parties have to come and negotiate to save the lives of others and to save the country from a complete dismantling if the war continues."

"I'm more optimistic that all parties have reached the break-even level where they have to go and sign a peace agreement, whether short or medium or long, but at least everyone would like to stop the war."

A key factor behind Bahah's optimism is the presidential transition in the United States which seems to be focusing minds. Because of the transition, any further peace efforts are likely to be delayed for months unless there is some agreement in the very near future.

Bahah, a former diplomat, was speaking in London at a meeting organised by the Chatham House think tank. In 2014 he was appointed prime minister in the Hadi government, later becoming vice-president, but was dismissed from both posts in April this year.

If the prospects for a ceasefire have improved there are still many questions about how that might be translated into a sustainable peace. Bahah suggested an initial agreement could be signed by "the current conflicting parties" but pointed out that they do not represent the whole country. "Once that has been signed I think we have to create opportunities to include the others to be part of the political situation."

Beyond the war itself, one major issue is separatist activism in the south which, if mishandled, could lead to Yemen breaking up. "That has to be properly addressed," Bahah said, arguing that unity is "a spirit" and not something that can be imposed by force.

"We have unity of land but no unity of people ... We need to think in a different way. There is still a chance that we keep the country united if the past grievances will be completely and fairly addressed to solve the issue of the south and other marginalised groups (even in the north)."

Considering their treatment since north and south Yemen united in 1990, it will probably be difficult to convince southerners that things can be different in the future. "It's not lost, yet, but it will be more difficult than before," Bahah said. "It's not lost if there will be real leadership – new leadership that will not be recycled from the old regime, because the old regime will create the same problem again and again.

"It depends on what any peace agreement will be and on who is going to represent a new government in future. That will have a reaction from people in the country, especially in the south ...

"If we are going to recycle the regime and bring in the same [leaders] we are doing a ceasefire rather than stopping the war. We have to be very careful that we select our new leaders where they could create hope. Hope is very important."

In that respect, it's crucial not to allow the old regime to be recycled. New faces are the only hope for a new kind of Yemeni politics and it's equally important to prevent old faces from making mischief on the sidelines.

The UN road map makes a move in this direction by specifying that 30% of ministers in any new cabinet should be women. The problem, though, is that a government of new faces might have trouble asserting its authority, since the newcomers would be unlikely to have much of a support base.

In answer to questions, Bahah insisted that he has no interest in returning as prime minister or vice-president. "I had enough during the last period," he said.

He also said it's time for ex-president Ali Abdullah Saleh to leave the country "along with all his colleagues" and there is "no place" for the Houthi leader, Abdel Malik al-Houthi. Houthis in general, though, "are part of the country. If they will move and become good citizens ... I think they have the right to live peacefully along with their brothers and sisters."

A former miliary attache at the British embassy in Yemen pointed out that the Saleh problem is not confined to the ex-president and his immediate entourage: "Large sections of Republican Guard, the National Security Bureau and the Special Security Force are loyal to Saleh".

This highlights one of the biggest challenges in rebuilding a post-war Yemen: how to create a genuinely national military and security apparatus. Bahah hoped that people's experiences during the last 19 months of conflict would persuade them of the need for that:

"Everyone has been burned by war – that should be a lesson for everyone that we cannot build our country based on fighters or families, tribes or sectarian or anything. If we don't come with creating a national military identity that represents the whole country we are just postponing another war."