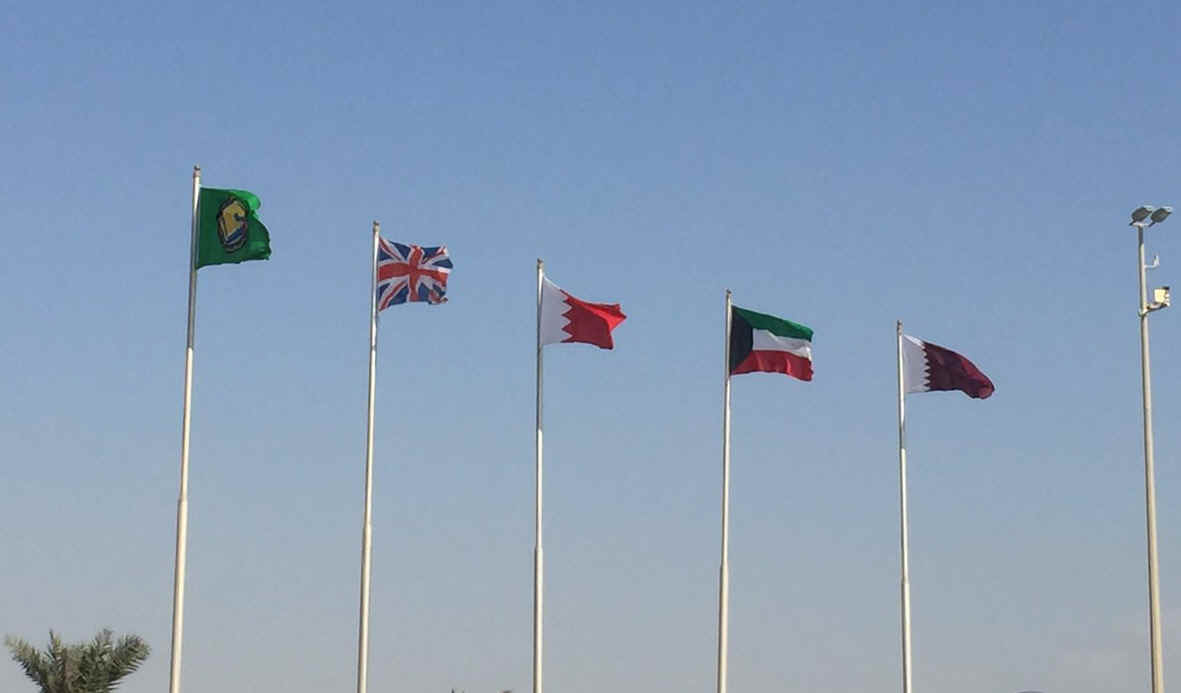 A British flag flying shamelessly alongside those of repressive Gulf regimes at the GCC summit in Bahrain yesterday signalled the opening of what prime minister Theresa May hails as "a new chapter" in foreign relations.

Mrs May has decided that when Britain extricates itself from Europe the Bahrainis, the Kuwaitis, the Omanis, the Qataris, the Saudis and the Emiratis will be among our new best friends and yesterday she smooched them brazenly with a speech that said everything they wanted to hear.

It was such a dire speech that the official news agency of Bahrain (hosting the summit) published it in full and, for once, had no need to doctor its text.

There was one slightly tricky moment when Mrs May spoke of confronting "state actors whose influence fuels instability in the region", but not to worry. Her next sentence made clear she was talking about Iran, and not the GCC states.

There were also passing references to Lebanon, Iraq, Yemen and Syria in the context of "Iran's aggressive regional actions". That was May's only mention of Yemen, which the Saudis have been bombing since March last year (non-aggressively, of course).

Though she avoided using the word "Shia", this simplistic picture provided more fuel for the GCC states' increasingly sectarian narrative against Iran. The only hint of nuance came when she commended the nuclear deal with Iran (which some Gulf states have been dubious out), saying it was "vitally important for regional security".

In line with the government's new retro-politics, after declaring her support for the long-dead two-state solution in Israel/Palestine, Mrs May stepped further back into the past with the words "east of Suez". The Gulf rulers may have scarcely noticed it but to British ears "east of Suez" is replete with imperial connotations – a phrase first used by the poet Rudyard Kipling in the days of the Indian Raj.

Mrs May told the summit:

"As part of the renewed relationship that I want to forge with you, the United Kingdom will make a more permanent and more enduring commitment to the long-term security of the Gulf.

"We will invest in hard power, with over £3 billion of defence spending in the region over the next decade, spending more on defence in the Gulf than in any other region of the world ...

"Thanks to the generosity of the Kingdom of Bahrain, we will create a permanent presence in the region, the first such facility east of Suez since 1971, with more British warships, aircraft and personnel deployed on operations in the Gulf than in any other part of the world.

"At the same time, a regional land training hub in Oman is establishing a permanent British army presence in the region. And I am delighted to announce that Saif Sareea 3 will take place in Oman in 2018 – the largest UK-Omani exercise for 15 years."

In the late 1960s and early 1970s, Britain's military withdrawal "east of Suez" – primarily from Malaysia, Singapore and the Gulf – formally drew a line under its imperial past. That position is now being reversed, with virtually no public debate about it. The reversal began two years ago under the Cameron government but May is now accelerating it.

There are risks attached to this, as a report by the Royal United Services Institute pointed out:

"By enhancing the UK’s relationships with the states of the southern Gulf, the UK is committing to the security and longevity of the Arab Gulf states – sheikhdoms which display only limited elements of democratisation ...

"The UK will also find itself very much on the fault line of searing sectarianism, between the Sunni and Shia worlds of Islam, that is increasingly defining the geopolitical landscape of Gulf and Middle Eastern security.

"With Saudi Arabia, Bahrain and (to a lesser extent) Kuwait all contending with significant sectarian challenges to their internal security, and with Iran and Saudi Arabia engaged in what is so far a sectarian cold war in which the temperature could quite easily rise, the unintended consequences and outcomes of the UK’s strategic embrace of Arab Gulf states should not be underestimated."

There is quite a lot more about the plans for military and security cooperation in a joint communiqué issued yesterday (which I hope to discuss in a future blog post).

Not only has the British government got itself into a hopeless muddle over Brexit; it is now laying the foundations for further muddles after leaving the EU. As with Brexit, there are different messages from different voices in the government.

As Mrs May returned from her imaginary triumph at the GCC summit, it emerged that her foreign secretary, Boris Johnson, had been badmouthing the Saudis at a conference in Rome.

"There are politicians who are twisting and abusing religion and different strains of the same religion in order to further their own political objectives. That’s one of the biggest political problems in the whole region. And the tragedy for me – and that’s why you have these proxy wars being fought the whole time in that area – is that there is not strong enough leadership in the countries themselves."

"That’s why you’ve got the Saudis, Iran, everybody, moving in, and puppeteering and playing proxy wars."

Johnson will no doubt face questions about that when he arrives in Bahrain later this week for the Manama Dialogue, a conference organised by the International Institute for Strategic Studies. IISS is an ostensibly British think tank (and a registered charity) which – it was revealed earlier this week – secretly received £25m over a five-year period from the Bahraini royal family.