Fox News and an unbelievable tale from Yemen

On Monday Houthi fighters struck a Saudi warship off the coast of Yemen, killing two of its crew and wounding three others. On Tuesday, under a banner saying "EXCLUSIVE", Fox News came up with a startling and hard-to-believe claim. Citing unnamed officials at the Pentagon, it said the "Iranian-backed suicide attack" on the Saudi frigate "may have been meant for an American warship".

Fox News said the claim was based on analysis by US intelligence officials of a video showing the attack. In the video, circulated by the Houthis, a voice shouted "Allahu akbar!" twice immediately after the explosion, followed by the Houthi slogan: "Death to America, death to Israel, a curse on the Jews, victory to Islam".

The Houthis have been using this slogan for years and only a fool would imagine it meant the Houthis thought they had hit an American warship, let alone an Israeli one. Nevertheless, it seems to have been the basis for the American "intelligence" assessment reported by Fox News. 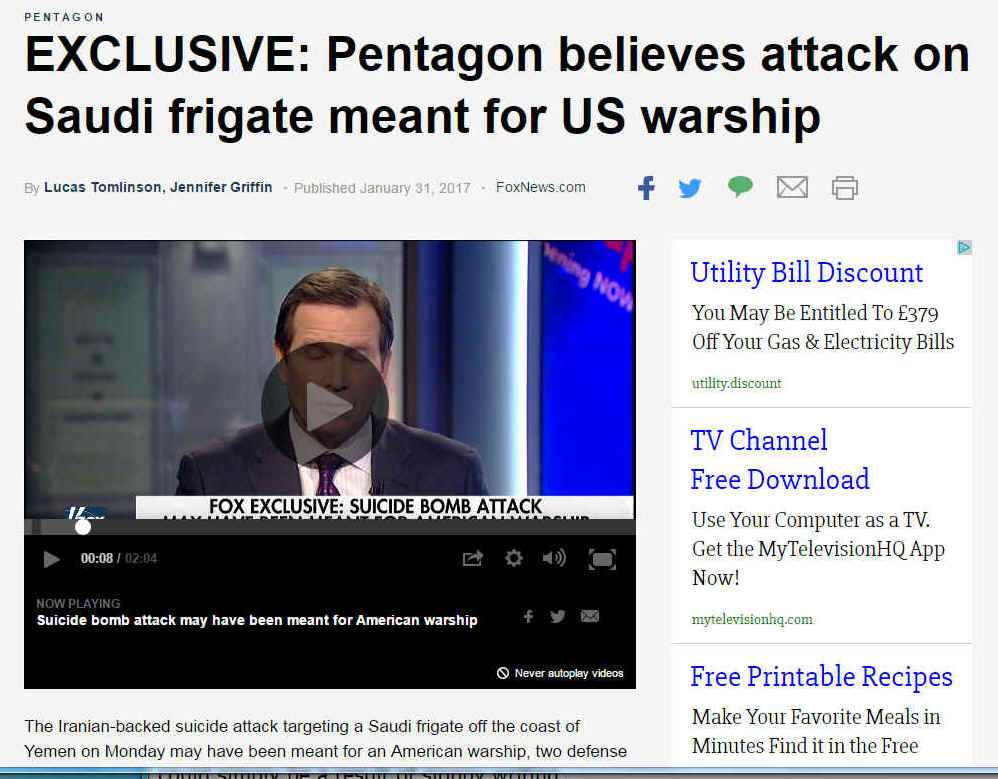 In their orginal announcement of the attack, Houthi sources gave no indication that an American ship was the intended target. They correctly identified the frigate as Saudi and gave its name as "al-Madina".

The Houthis also said they had hit the frigate with a missile but Fox News insists it was a suicide attack.

The initial source of the suicide claim appears to be a report from the Saudi government news agency which refers to an attack by three "suicide boats" (zawariq intihariyya in Arabic). The Saudi report goes on to say "one of the boats struck the rear of the ship which resulted in the boat exploding and fire breaking out in the rear of the ship". Confusingly, it then says the boats escaped, pursued by Saudi forces.

The Arabic version implies that all three boats escaped, since refers to them in the plural. If one had been destroyed and only two escaped, the rules of Arabic grammar would require use of the "dual" form rather than the plural. However, that could simply be a result of sloppy writing.

On the whole, Saudi reports of this kind are no more trustworthy than those from the Houthis but it does seem on this occasion that the Houthis are more likely to be telling the truth. There is certainly not enough evidence to report the alleged suicide attack as fact (as Fox News did).

Suicide attacks are not part of the Houthis' normal modus operandi and they have used missiles in previous attacks on ships in the Red Sea. Also, what can be seen in the video is more suggestive of a missile strike: it shows a ball of fire rising from the ship's superstructure.

If the ship had been rammed by a small boat which then exploded, damage to the ship's hull would be expected. The Saudi account makes no mention of hull damage and says the frigate continued its patrol duties after the fire had been extinguished. For comparison, the al-Qaeda-linked suicide attack on the USS Cole in 2000 – carried out by two men in an explosives-laden rubber dinghy – blew a 40-foot hole in its side, making it completely unseaworthy.

Fox News has a history of hyping up stories about the conflict in Yemen. Last October it wrongly suggested Iranian warships were about to confront US Navy ships patrolling off the coast of Yemen. The Iranian "flotilla" (as it was described) consisted of a single 48-year-old frigate and its supply vessel travelling on a pre-anounced voyage to eastern and southern Africa.