The first tangible result of Donald Trump's visit to the "Muslim summit" in Riyadh last weekend has been the reopening a long-standing feud among Arab Gulf states. Over the last few days Saudi and Emirati media have been attacking Qatar ferociously, especially over its attitude towards Iran and terrorism.

The main reason – or perhaps the pretext – for this uproar is an inflammatory speech which according to Saudi and Emirati media was delivered by Qatar's emir at a military graduation ceremony on Tuesday.

Although claims of hacking are a common excuse when people post things on the internet which they later regret, in this case Qatar's claims of fabrication appear to be true. There is now growing evidence – including testimony from a journalist who attended the military ceremony – that the emir did not in fact deliver any speech.

The emir certainly attended the ceremony and TV cameras filmed it. But no audio or video recording has emerged of the emir making a speech there, and according to numerous Qataris he did not make one.

Yesterday, a journalist who was present told al-bab he could "absolutely" confirm those claims: "The Emir didn't make any speech at all."

Jassim Mater Kunji, a producer for the Qatari-owned al-Jazeera English channel, said he had been at the event in a military capacity, not as a journalist. "I was called in to participate in the ceremony as one of the cadets. I completed my compulsory military training two years ago but they retain the right to call us back for 15 days a year."

Nevertheless, media in Saudi Arabia and the Emirates still insist that the speech took place. Both countries are blocking Qatari-linked websites as an apparent reprisal, and have since been joined in that by Egypt. 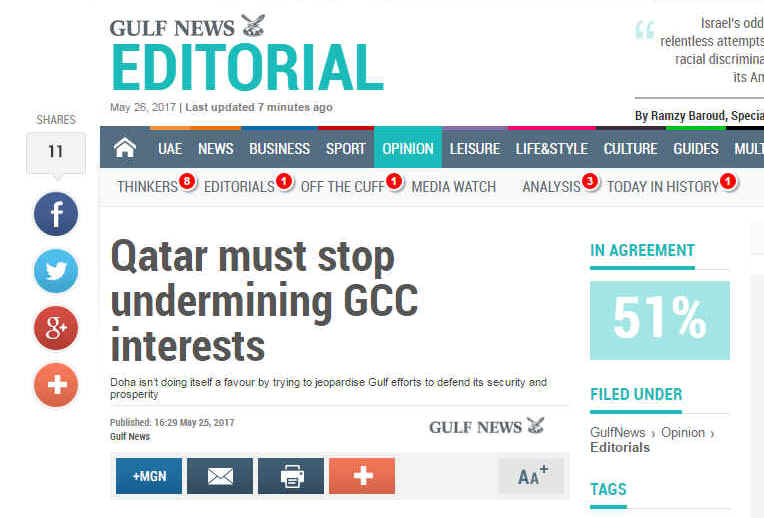 Yesterday, the Emirati-based Gulf News weighed in with an editorial comment headed "Qatar must stop undermining GCC interests". It began by talking about the "success" of the Gulf Cooperation Council (Bahrain, Kuwait, Oman, Qatar, Saudi Arabia and the UAE) in confronting various challenges over the years, and continued ...

"Today, the GCC is faced with another challenge. And unfortunately, it is coming from within the ranks of the group. Shortly after the conclusion of last week’s GCC Consultative Summit in Riyadh, we were stunned by remarks, attributed to the Emir of Qatar, Shaikh Tamim Bin Hamad Al Thani, during a military ceremony on Tuesday, in which he appeared to defy not only the official GCC policies on most critical issues — particularly Iran, Hamas and Hezbollah — but also to hint that the American bases in Qatar were the only guarantee to safeguard his country from the 'threat posed by some neighbouring countries'.

"While the three summits hosted by Saudi Arabia last Saturday and Sunday, in the presence of United States President Donald Trump and leaders of 57 Muslim countries, agreed that Iran was fuelling conflicts and sectarian tension in the region, Shaikh Tamim has been quoted by the Qatari official news agency as saying: 'Iran represents a regional and Islamic power that cannot be ignored and it is unwise to face up against it. It is a big power in the stabilisation of the region'."

The editorial went on to dismiss Qatar's claim that the report of the emir's speech was fabricated and had been posted on the news agency's website by subterfuge:

"A quick look at the archives showed that the emir’s statement was not only carried by the news agency on its official website and Twitter account, but also on Qatari state television and other online platforms that belong to the state media outlets."

The Saudi-owned al-Arabiya has made a similar argument but it doesn't stand up to scrutiny. The idea is that these multiple references serve as corroboration of the emir's imaginary speech. They don't, because they are all derived from the same source – the faked report on Qatar News Agency's website.

But how did the report of the emir's speech come to appear on the news agency's website?

One possibility might be some form of sabotage or mischief-making within the agency. At present there is nothing to suggest this is what happened but it would be unwise at this stage to rule it out. However, looking at some external cause – which currently seems more likely – there appear to be two possibilities.

One would be direct hacking of the agency's website to post fake content. This might seem the most obvious way but the same result could also be achieved by hacking into the agency's editorial system.

Hacking the editorial system could be a lot easier than hacking into the website. All it needs is the user name and password of a single employee. Once inside the editorial system, posting a fake news item would be a relatively simple matter. If the employee had a high enough level of access it might also be possible to manipulate the agency's social media accounts without needing any additional passwords.

At present, though, this is just a theory of how the story got there. Any further thoughts or information from readers are welcome.