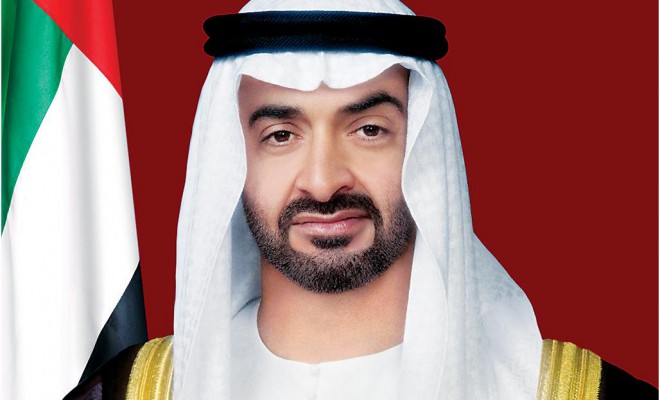 The day before unknown persons hacked a government website in Qatar, triggering a vicious media feud among Gulf states, the crown prince of Abu Dhabi was urging a former CIA director to give the Qataris "hell".

On 23 May, a conservative think tank with strong Israeli connections held a conference in Washington aimed at putting political pressure on Qatar. Admission was by invitation only and the event was "heavily attended by officials from the Trump administration".

Later that day, a story appeared on the website of Qatar's official news agency reporting a speech allegedly made by Qatar's emir at a military graduation ceremony. Qatar said the website had been hacked and the story was a fake.

People who were present at the military ceremony insist that the emir made no speech and none of the available video footage shows the emir speaking. Nevertheless, remarks attributed to the emir re-ignited old quarrels between the UAE and Saudi Arabia on one side, and Qatar on the other (see previous blog post for more background).

The keynote speaker at the Washington conference was Robert Gates, a former CIA chief who also served as US Secretary of Defense under President George W Bush.

On 22 May, Gates sent an email to Yousef al-Otaiba, the Emirati ambassador in Washington, apparently apparently alluding to his talk at the conference next day. Gates wrote:

"Happily it's not a speech but a fireside chat. But I think I'll have the chance to put some folks on notice."

Replying to this, ambassador Otaiba wrote:

"MBZ sends his best from abu dhabi. He says 'give them hell tomorrow'." 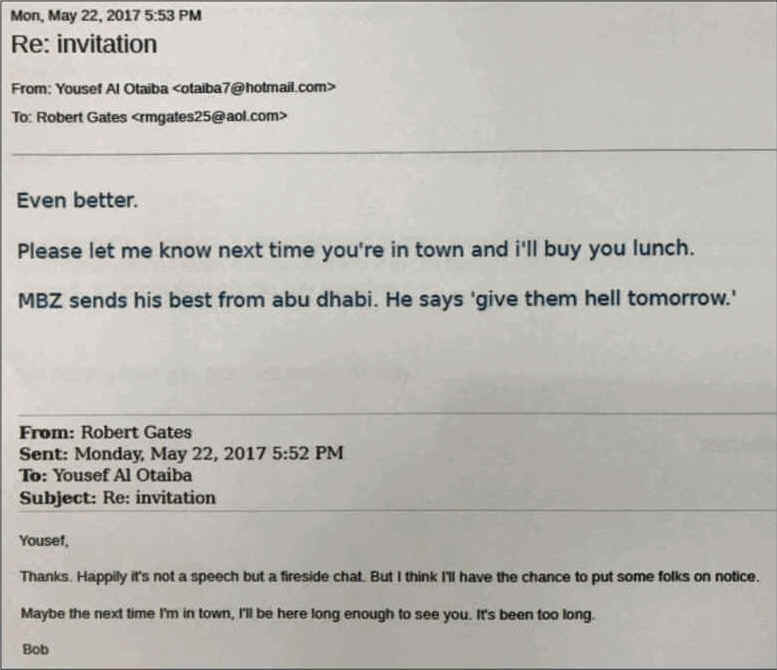 At the conference next day, Gates accused Qatar of reneging on its commitments and said the US should send an envoy to the emir with a list of activities that Qatar must stop supporting, "otherwise the nature of its relationship with them will change".

Gates also suggested a way of pressurising Qatar into compliance – by threatening to pull US forces out of the Udeid airbase in Qatar (built at the previous emir's expense) which serves as Centcom's forward headquarters.

Qatar, which had not been invited to send anyone to explain its own position to the conference, viewed this as part of an orchestrated campaign. Its foreign minister pointed to numerous articles that had been appearing in American media ahead of the conference. At least four of these had been written by people working at the Foundation for Defense of Democracies, the main organiser of the Washington conference:

Congress must press Qatar for highlighting hate preacher – David Weinberg, The Hill, 30 April
Fooling many of the people much of the time – Clifford May, Washington Times, 9 May
By Hosting Hamas, Qatar Is Whitewashing Terror – Kate Havard and Jonathan Schanzer, Newsweek, 11 May
Qatar Needs to Do Its Part – John Hannah, Foreign Policy, 22 May

The Foundation for Defense of Democracies (FDD) is not very prominent among Washington think tanks but, according to John Judis in an article for Slate magazine, it has played major role in providing "intellectual firepower" for efforts to overturn the nuclear deal with Iran. In 2013, an investigation by Slate magazine found that FDD was mainly funded by three wealthy American Republicans – Bernard Marcus, Paul Singer and Sheldon Adelson – who were also strong supporters of Israel. Adelson is said to be a close friend of Israeli Prime Minister Benjamin Netanyahu.

Previous blog posts on this topic

Among the six Gulf Cooperation Council states, Saudi Arabia, the UAE and Bahrain have a hostile view of Iran – and on that point they have something in common with Israel. Qatar, which shares the world's largest gas field with Iran, takes a more conciliatory line and, to some extent, Kuwait and Oman do too.

Last month's "Muslim summit", which was attended by Donald Trump, initially looked like a victory for the anti-Iran hardliners but its actual effect has been to open up divisions among the Gulf states. The attacks on Qatar seem mainly intended to make it comply with the Saudi/Emirati view but they have also focused on Qatar's alleged support for terrorism and its connections with the Muslim Brotherhood and Hamas (another Israeli concern). One effect of highlighting Qatar in this way is that it helps divert attention from Saudi Arabia's Wahhabi ideology and its role in spawning groups like al-Qaeda and ISIS.

The pre-conference email exchange between former CIA chief Gates and UAE ambassador Otaiba was part of a series of emails that surfaced on Friday, circulated by a group calling itself "GlobalLeaks" and using a free email account from a Russian provider. Other emails in the series show a warm and apparently cooperative relationship between FDD and the Emirati ambassador.

Several of these discuss arrangements for a proposed visit to the UAE on June 11-14 by three of FDD's staff: Mark Dubowitz, Jonathan Schanzer and John Hannah. On 23 April, Hannah wrote to Otaiba saying "our primary goal is to establish an ongoing professional relationship with the UAE's top governmental experts on various aspects of the Middle East". Hannah added that he hoped the trip would lay "a strong foundation for future mutually beneficial cooperation between our respective institutions".

FDD provided the embassy with a draft agenda for the trip and the names of senior Emiratis – including Crown Prince Mohamed bin Zayed – that its staff were hoping to meet.

Next day, Hannah sent a further email to the ambassador, adding another name to the request list:

"Youssef: one other thing, if appropriate on your end, Schanzer (who is in AD [Abu Dhabi] from evening 11th the early morning 13th) and I would like to request a meeting with Dahlan, if he's willing and available."

"Dahlan" presumably refers to Mohammed Dahlan, the former head of Palestinian “preventive security” in Gaza, who left Palestine amid accusations of corruption. On the face of it, asking an Emirati ambassador to arrange a meeting with Dahlan might seem an odd thing to do, but since leaving Palestine Dahlan has reportedly been working as a security adviser to Crown Prince Mohamed bin Zayed.

The use of a Russian email address for circulating the leaked documents points to Russia as the source, but that could be a deliberate smokescreen. One obvious possibility – though currently not supported by any evidence – is that the leak might have been intended as a reprisal for the hacking of Qatar News Agency's website.

However, it's not clear that the UAE ambassador's leaked emails were obtained through hacking. The documents posted online appear to be photographs of email print-outs rather than electronic copies.

Yesterday, Qatari media quoted an unnamed source as saying that "an FBI team" has been in Doha for the last week helping to investigate the security breach at Qatar News Agency. Two other unnamed countries were also said to be assisting. Twelve days after the incident, the agency's website is still offline.

"The hackers posted a slew of disturbing images and threats against the royal family including one tweet that read: 'We are going to paint the floor with your blood'."

The hackers also changed the minister's name of the Twitter account to Arabic words that mean "Ball of meat". This is a nickname previously used by the Bahrain regime's opponents, because the minister is overweight.

Material posted on the minister's Twitter feed suggests this was the work of Shia militants but, given the timing of the attack, a connection with the Qatar hacking and the UAE embassy leak should probably not be ruled out.