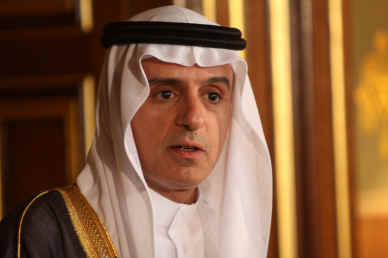 Saudi Arabia has accused Qatar of "declaring war" on the kingdom in a dispute over the hajj – the annual Muslim pilgrimage to Mecca.

At a press conference yesterday Saudi foreign minister Adel bin Ahmed al-Jubeir said Qatar was seeking to "internationalise" the holy sites (Mecca and Medina), describing this as aggressive and a declaration of war against Saudi Arabia.

He added: "We reserve the right to respond to any party working in the field of internationalising the holy sites."

Jubeir's remarks were reported by the official Saudi news agency (Arabic version here) along with various other media organisations.

Saudi Arabia's control over the holy places, and especially its organisation of the hajj, has been questioned by Muslims from time to time – often after fatal accidents. Last year, for example, in an article for Huffington Post, Anisa Mehdi wrote:

Concerns about Saudi Arabia’s authority over the two sites [Mecca and Medina] have been simmering for some time, but the deadly stampede that took place there during the 2015 hajj pilgrimage has lent greater urgency. Two months of the tragedy at the Jamarat Bridge where pilgrims perform the hajj’s penultimate ritual, the death count was more than 2,400.

Criticism and blame were quick to follow, and many leveled accusations of inept management against the Saudi government. Riyadh in turn placed the fault with the pilgrims for allegedly failing to follow instructions. Muslim leaders looking for a solution have begun to suggest that it might be time for the reigning House of Saud to relinquish its absolute control over the two cities, which lie within the geographic boundaries of the kingdom – boundaries won by conquest.

The California-based Muslim Public Affairs Council suggested, “If Saudi Arabia cannot handle the scrutiny and answer the challenging questions, it is time to re-evaluate its roles and responsibilities for the hajj.” London’s Islamic Human Rights Commission chimed in, suggesting “some sort of Islamic Waqf, as it was at the time of Ottomans, [to make] sure that the main Muslim nations will actually have a say and they coordinate how this whole thing [is] run.”

Iran's supreme leader, Ayatollah Ali Khamenei, made a similar call after disputes with the Saudi authorities resulted in Iranian pilgrims being excluded from last year's hajj:

“Because of Saudi rulers' oppressive behaviour towards God's guests, the world of Islam must fundamentally reconsider the management of the two holy places and the issue of hajj,” Khamenei said.

Oddly, in the light of the Saudi minister's war talk, there appear to have been no calls of that kind by Qatar. Yesterday, Qatar's foreign minister and the ministry of religious endowments (awqaf) both insisted that none had been made – though Qatar has accused Saudi Arabia of "politicising" the hajj.

On Saturday, Qatar's government-appointed National Human Rights Commission (NHRC) said it had filed a complaint with the UN's special rapporteur on freedom of belief and religion over what it sees as restrictions on Qatari pilgrims. This may be the basis of the Saudi minister's claim that Qatar is seeking to "internationalise" the holy sites, though it hardly seems like grounds for war.

Saudi Arabia says Qataris are welcome to take part in the hajj, which begins at the end of August, but the economic siege imposed on Qatar by Saudi Arabia, the UAE, Bahrain and Egypt has caused some practical difficulties.

Since the land border is closed, Qatari pilgrims are being told they must travel to the hajj by air, arriving either at Jeddah or Medina airport. They will not be able to fly with Qatar Airways because it is banned from Saudi airspace.

Qatari pilgrims will also have to apply for visas on arrival rather than in advance (presumably because of the severing of diplomatic relations).

Meanwhile, Saudi media are accusing Qatar of trying to keep its citizens away from the pilgrimage. According to the Saudi-owned al-Arabiya, Qatar has been preventing them from registering for the hajj by suspending the relevant website. It's unclear whether the suspension was due to a decision by the authorities or technical problems on the website.