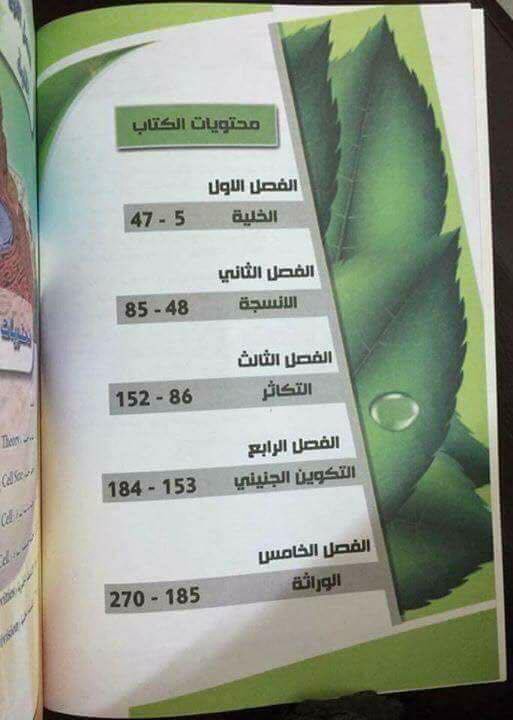 Iraq's education ministry has quietly dropped a chapter about evolution from its biology textbooks. The ministry has so far given no explanation but the change has brought complaints and ridicule from Iraqis on social media.

Among the complainers, Dr Mohammed Fawzi, who studied genetic engineering, bioinformatics and biotechnology at Bahgdad University, posted this sarcastic comment in Arabic on Facebook:

We congratulate our people on deleting the chapter on evolution from the sixth grade textbook,  because we have no need to evolve. Backwardness is beautiful!

Congratulations to us on our stance against the greatest scientific truths. Then come those who say: "Why are our people backward?"

Photographs of the revised textbook's index page have been circulating on the internet. They show it contains chapters on cells, tissue, reproduction, embryology and genetics.

The omitted chapter had four sections, according to school student Abdulrahman al-Makhzomy who has a copy of the old textbook:

The education ministry ought to be modernising teaching methods in Iraq and giving students a better understanding of science, "but what we are seeing is the contrary of that", Makhzomy wrote in a post on Medium.

Deletion of the chapter seems to be partly to appease religious sensitivities but it may also signal official recognition of everyday realities in Iraq. In practice most teachers already avoid discussing evolution in class on the grounds that it conflicts with Islam, some dismiss it as just a theory and only a few teach it properly, Makhzomy told al-bab. The ministry had previously reduced the number of marks allocated to evolution in exams.

In 2014, ISIS/Daesh ordered drastic changes to the curriculum for parts of Iraq that were under its control. These included removing references to Darwinism and evolution from science books and replacing them with statements that God was the creator of everything.

Historically, Islam's relationship with science has been less problematic than that of Christianity, and Iraq under the Abbasid caliphs was renowned as a centre of scientific knowledge.

Publication of Charles Darwin’s book, On the Origin of Species, in 1859 drew a variety of responses from Muslims – some predictable, some less so. One early Muslim critique – from Jamal al-Din Afghani in 1881 – cited the continued existence of male foreskins as evidence that Darwin’s ideas on natural selection must be wrong: “Is this wretch [Darwin] deaf to the fact that the Arabs and Jews for several thousand years have practised circumcision, and despite this until now not a single one of them has been born circumcised?”

On the other hand, Hussein al-Jisr, a nineteenth-century Lebanese Shia scholar who advocated combining religious education with modern science, saw room for an accommodation between evolution and scripture. “There is no evidence in the Qur’an,” he wrote, “to suggest whether all species, each of which exists by the grace of God, were created all at once or gradually.”

Some Muslims even went so far as to claim that Darwin's ideas had Islamic roots.

Widespread rejection of evolution by Muslims seems to be a fairly recent development, probably influenced by the spread of religiosity but also by ideas from American Christian creationists. It’s an area where Arab schools, universities and media nowadays tread warily and often timidly for fear of provoking complaints. (This is discussed in more detail here, in a chapter from my book, Arabs Without God.)

Iraq is not an exceptional case. In other Arab countries teaching about evolution can range from  cautious to non-existent. Ahmad Saeed, a Yemeni, recalled that his biology textbook contained a chapter on natural selection which students were told to ignore.

Mohammed Ramadan, who studied at a state school in Egypt, said:

"They have a chapter [in the textbook] – the final chapter – and it’s all done in a kind of comic way. Most of it doesn’t come in the exams, but if it does it’s mostly about the birds that migrated from certain places and how they changed their colours – a very, very superficial concept of evolution. Some of the teachers accept that evolution may happen through adaptation but they say even if it’s likely to happen in animals it won’t happen in humans, because humans are special."

Egyptian universities are “not exactly crawling” with evolutionists either, according to Nour Youssef in a post on the Arabist blog: “Professors almost always introduce the subject as an obsolete, wrong theory, misrepresent it and then conclude with things like: Why are monkeys still around if we came from them?”

In 2010, a study of evolution teaching in the Middle East found striking differences between Saudi Arabia and Iran. Its author, Elise Burton, cited a two-page section on “The Origin of Humanity” in the highest-level biology textbook used in Saudi schools which presented evolution theory as a form of blasphemy:

"In the West appeared what is called ‘the theory of evolution’, which was derived by the Englishman Charles Darwin, who denied Allah’s creation of humanity, saying that all living things and humans are from a single origin. We do not need to pursue such a theory because we have in the Book of Allah the final say regarding the origin of life, that all living things are Allah’s creation."

The book went on to suggest that Darwin's theory is now largely discredited:

"Due to this theory’s deviant character and its contradictions to intuition and reason, there were many Western scientists who stood against it and exposed its fallacies in scientific research and rational inferences ..."

On the other hand, Burton found the treatment of evolution in Iranian textbooks was far more straightforward:

"An especially telling comparison between the Iranian and Saudi advanced biology textbooks emerges in the characterisation of Darwin and his contemporaries, and the development of support for Darwin’s ideas by later scientists. The Iranian textbook humanises Darwin with a relatively detailed account of his life and a discussion of its historical context ...

"Fascinatingly, where the Saudi textbook dismisses evolution as fraudulent science, the Iranian text announces 'nearly all biologists today have accepted that Darwin’s theory can explain the basis of diversity of life on earth'."

However, Burton noted that while Iranian textbooks accepted that natural selection applies to humans, they avoided "explicit attempts to place humans within the larger picture of the evolution of life". (Among Muslims who accept evolution in general there is a common belief that humans, unlike all other forms of life, did not evolve but were created.)

Burton suggested several factors that could explain these Saudi-Iranian differences – including social differences and differing historical experiences. Clearly, though, theological differences and the ways that religion is organised in these two countries plays an important part. The wahhabi/salafi version of sunni Islam that dominates in Saudi Arabia is especially rigid while shia Islam, which dominates in Iran is a lot more flexible in its approach to interpreting scripture.

Iraq, with a mixed sunni-shia population falls somewhere in between – which may be another reason why the education ministry, rather than taking sides, prefers to keep evolution out of the classroom.