Qatar 'opposition' conference: can it get any weirder?

Despite having assistance from two PR firms – one headed by an American who used to organise events at the White House – the controversial and much-heralded "Qatar opposition" conference due to be held in London tomorrow is looking rather shambolic. 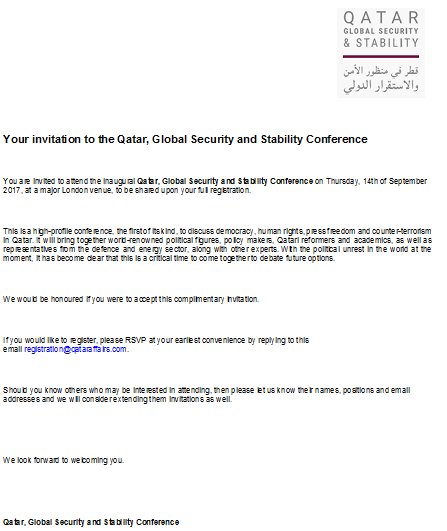 After sending out vaguely-worded "complimentary" invitations last week, the organisers have now provided a few more details of the programme.

There is still no word about the line-up of speakers – which is an odd way to run a conference, especially one that is supposedly going to be attended by "hundreds of world-renowned political figures, policy makers, academics, commentators and Qataris".

Unhelpfully, yesterday's press release also omitted to mention what time the event will start, though a countdown clock on the conference website suggests it will be held under cover of darkness, starting at 00.20 on Thursday morning.

There was confusing information too about the venue, which the press release gave as "the Intercontinental Hotel at the 02 Centre in London". Visiting Qataris who look up "O2 centre" on Google are liable to find themselves at a shopping mall on the Finchley Road in North London which has no Intercontinental Hotel nearby. They should aim instead for the O2 arena in Greenwich (just next to the cross-Thames cable car known as the Emirates Air Line).

The conference, which is being held in the midst of a vicious political political spat among Gulf states, was initially billed as a discussion of "democracy, human rights, press freedom and counter-terrorism in Qatar". The latest form of words is that it will "highlight Qatar’s sponsorship of Islamic terrorism, human rights abuses and use of soft power". The public face of the conference is Khalid al-Hail, a Qatari exile who has proclaimed himself leader of the country's opposition, and there had been some expectations that tomorrow's event would signal the birth of a reform-and-democracy movement in Qatar. Hail made a similar attempt to launch a Qatari opposition movement during a similar Gulf quarrel in 2014.

However, it looks as if the actual conference will be less about developing internal opposition in Qatar than stirring up hostility towards Qatar internationally. According to the programme there will be five panel discussions – all of them reflecting familiar Saudi/Emirati talking points in their quarrel with Qatar:

2. Qatar and Iran’s Foreign Policy: A Source for Regional Instability
Focussing on how Qatar and Iran’s foreign policy has contributed to the general instability and insecurity that now characterises the regions of the Middle East and North Africa. It will look at the extent to which Qatar and Iran, in pursuit of their own self-interest, have had a detrimental effect on stability in the region.

3. A forbidden debate: Qatar’s aspirations for global prestige, democracy and human rights
This panel will look at Qatar’s abuses of human rights in the context of the 2022 Football World Cup as well as examining its breaking of international human rights laws.

4. Al-Jazeera: Free Press vs. Voice of terror?
In the early days of Al-Jazeera it was considered a beacon of free press and a challenge to authoritarian Middle East regimes. Recent coverage shows a more biased coverage synergetic to Qatar’s foreign policy. Using a number of exclusive sources, this panel will examine the spectrum of thought about Al-Jazeera.

5. A Vicious Circle: Economy, Geopolitics and Global Energy Security
Addressing some of the chief characteristics of Qatari foreign policy including its diplomatic ambivalence, its quest for security and subsequently regional hegemony and the manner in which Doha has used its economic largesse and natural gas reservoirs to carve itself a larger role in the region, often to the detriment of its neighbours and allies.

Meanwhile, an email written in extremely bad English and apparently addressed to African journalists and civil society members is circulating on the internet. Purportedly sent by a journalists' organisation in the UAE, if offers expenses-paid trips to attend the London conference. Given the amount of fakery, disinformation and subterfuge that has so far characterised the Gulf quarrel, it should probably be viewed with extreme caution. 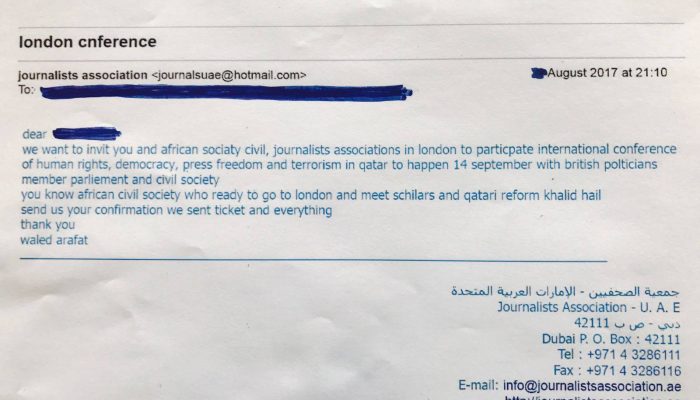 There are also more strange goings-on on the Qatari side. Statements attributed to the London Centre for Public Affairs (LCPA), a bogus PR/consultancy firm which has been attacking tomorrow's conference, continue to be quoted in Qatari media as if it were a genuine organisation.

Last week, a news item published only in Arabic on al-Jazeera's website quoted LCPA as saying the conference was being funded by the UAE and organised by "pro-Israel advertising companies and the Zionist lobby in America". However, there was no trace of this statement among the press releases on LCPA's website.

One LCPA press release, issued last week, urged British journalists to be "vigilant" and proposed five questions they should ask about the conference:

1. Which PR companies organise this event?

2. Why there is no paperwork and agenda for the event?

3. Why no names for speakers were announced, despite the claim of organisers that hundreds are due to attend and dozens to speak?

4. Who are the Qatari opposition figures? When did they become opposition? Who funds them?

5. Why the UAE ministry of information is securing flights and accommodation for participants?

(For the record, the UAE does not have a ministry of information.)

Strangely, this has been reported in Qatari media (here and here) as a list of SIX questions. According to them the sixth question is:

6. Who is Khalid al Hail? What's his history? Is there any Interpol warrant against him? Has he been criminally convicted before in Qatar for financial crimes?

This looks like a deliberate smear. Neither of the Qatari reports gives any information to suggest it is an appropriate question for journalists to ask.