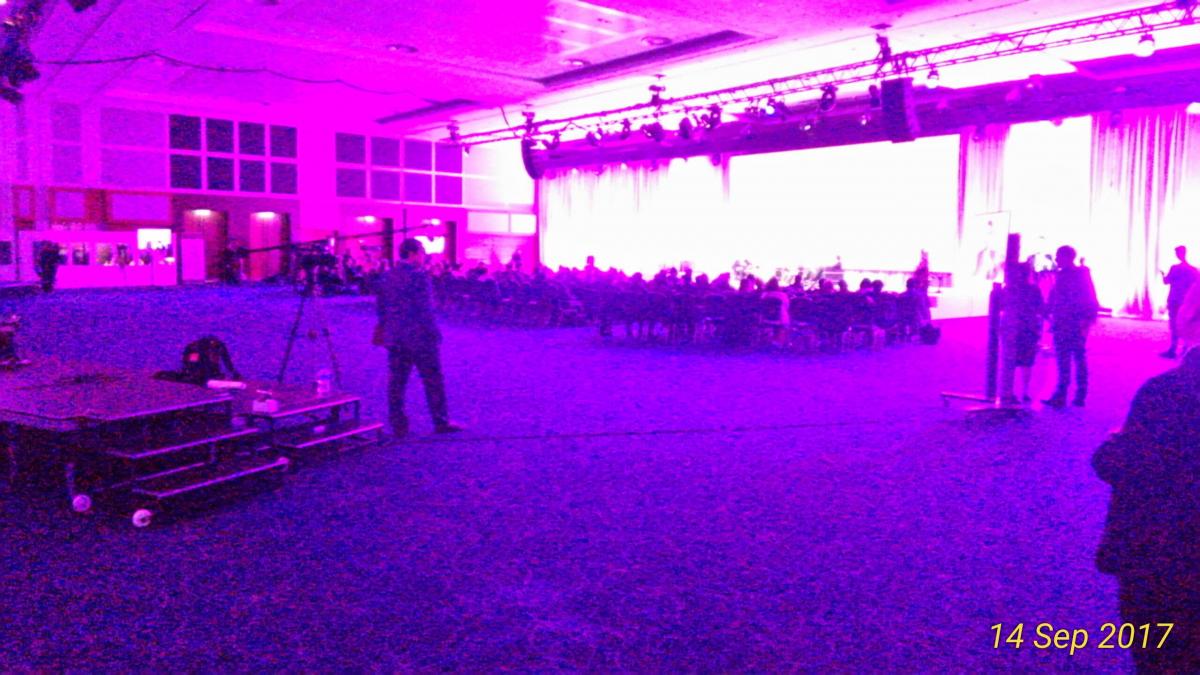 The London conference on Qatar, which has caused much hullabaloo over the last couple of weeks, took place yesterday – attended by numerous video cameras and a rather sparse audience of around 150 people, many of whom had badges saying "staff" or "press".

The controversial event had been dubbed as an "anti-Qatar" conference and as a "Qatari opposition" conference but on both counts it was something of a let-down. Although speakers repeatedly criticised Qatar – which after all was the main intention – the overall tone was far from strident. As for the Qatari "opposition", only two of them showed a public face.

Khalid al-Hail, the Qatari exile who had not only hired a ballroom for the conference and bathed it in eery purple light to match Qatar's flag but also employed dozens of helpers, a team of security men, three red-coated toastmasters and two PR firms, and provided everyone with a free lunch and a bulky dossier about Qatar – all of which he claims to be paying for out of his own pocket – may be wondering if it was worth the money. Likewise, the Qatari government ought to be wondering if it really needed to kick up such a fuss about the conference beforehand.

For Qatar's opponents, persuading the world that the "crisis" over Qatar is more than just a feud among the Gulf's royal families is not an easy task and, if anything, yesterday's conference brought the difficulties into sharper focus.

The biggest problem is that most of the accusations levelled against Qatar by Gulf states – lack of democracy, abuse of human rights, support for terrorism, etc – can also be levelled against its accusers, in some cases with more justification.

This became apparent with the very first speech – from Thomas Mace-Archer-Mills of the British Monarchist Society. Mr Mace-Archer-Mills is a big fan of monarchies, but he prefers the constitutional kind, with elections and so on. "Democracy as we know it in the west is not happening in the Middle East in Qatar," he said. "The reason to have a monarch is to ensure that the public has a voice, that democracy reigns supreme – and that only happens when a parliament is given a proper seat at the table."

The problem here is that the more Qatar is criticised for having autocratic rule, the more people are likely to ask why, if Qatar needs democracy, its main foes in the region, Saudi Arabia and the UAE, don't need democracy too.

The same can be said of human rights and free speech. Other speakers (who in line with Gulf tradition were all male) criticised Qatar for its ill-treatment of dissidents and migrant workers – charges which apply throughout the Gulf.

Mohamed Fahmy, a former al-Jazeera journalist, complained that the Qatari TV station is manipulated by the emir and his henchmen, as if the rulers of Saudi Arabia or the Emirates would never even contemplate doing such a thing.

On terrorism too, it's difficult to single out Qatar as uniquely bad. James Rubin, formerly of the US State Department, commented:

Lord "Paddy" Ashdown (a Liberal Democrat peer) talked of a report on Saudi funding of terrorism in Britain which the British government compiled but then suppressed.

Ashdown saw an "odd contradiction" in this. "On one hand we believe we are in a partnership with Saudi Arabia and with Qatar and the other Gulf states in fighting terrorism but on the other we know that they are funding terrorism in certain areas." The usual get-out is to claim the funding comes from businessmen, not the government, but Ashdown asked: "In a nation like Saudi Arabia do you really believe that the businessmen would be able to fund terrorist organisations if the government did not want that to happen?"

Presumably these were not the kind of views the conference organisers had been hoping to hear.

Chairing a panel discussion, Rubin wondered where to draw the line on a broad spectrum that includes groups which were once considered terrorist but are now accepted (such as the PLO), the Muslim Brotherhood which governed Egypt for a while, political groups that may have a terrorist wing, and groups like al-Qaeda whose main business is terrorism: "Clearly the government of Qatar did support Hamas and the Muslim Brotherhood but sometimes people lump all this stuff together."

Charles "Chuck" Wald, a retired American general, suggested it "boils down to a fair distinction between what is acceptable political governance and what isn't. What isn't acceptable is what we would describe as terrorism."

What to do about Qatar?

But if Qatar is deemed guilty as charged, what should be done about it? Saudi Arabia and the UAE, along with Bahrain and Egypt, have all ostracised Qatar and want other countries to do the same. At yesterday's conference there didn't seem to be much appetite for that, or for the hardline approach adopted by the Saudis, Emiratis and their allies in the ultimatum issued last June.

On the question of how to respond to governments that allow businessmen to sponsor terrorism, British Conservative MP Daniel Kawcynksi brought up the interesting example of the United States in the 1980s. Margaret Thatcher, he said, had been lobbying Ronald Reagan to prevent businessmen in Boston from giving money to the IRA thinking that these were freedom fighters seeking to free Ireland.

"We, in the United Kingdom, who were at the [receiving] end of the bombing campaign did not consider them as freedom fighters. We considered them as terrorists, and it was that partnership between Margaret Thatcher and Ronald Reagan that actually managed to be the prelude to the peace process."

Ashdown, who said the balance should always be in favour of dialogue, added:

"Just because a government does one or two things that you do not like does not mean that it's a government you cannot speak to.

"The United States' record on handling some of the IRA funding is a pretty spotty one. We do not say 'We're never going to speak to the United States government because they look as though they are funding terrorism'.

"That's also true of the Muslim Brotherhood, it's also true of Hamas. If they have the democratic support of people in their own community you cannot say 'We are never going to talk to you' ... Taking a black and white position on this isn't a solution."

General Wald chipped in: "There needs to be a consequence for bad behaviour but it doesn't mean you don't have a dialogue."

Unexpected sympathy for Qatar – from Israel

Surprisingly, the contribution that seemed most supportive towards Qatar came from an Israeli, Brigadier General Shlomo Brom.

Describing Qatar as "a frenemy" of Israel, he said the relationship "like most things in the Middle East, is complicated and full of contradictions" but Qatar always supported the peace process. It was one of the first Arab countries to establish a direct relationship with Israel in the 1990s and there was "a kind of Israeli office" (a pseudo-embassy) in Qatar for a number of years.

Asked if the two countries had been sharing intelligence, he replied: "Well, those kinds of things are not for [public] consumption" but he assumed they would have shared "information that deals with our shared interests".

Following the outbreak of the Arab Spring, Qatar's relations with Israel had taken a downturn, mainly over its support for political Islam.

"I don't think Qatar is directly supporting terrorism," Brom said. "But if you give money to Hamas for other purposes it means Hamas has more resources to support its terrorist and military activity."

Even so, he saw two reasons why Qatar is still "useful for Israel":

"First, sometimes it is convenient that you have a partner that talks with everyone. We don't have direct dialogue with Hamas, for example, but sometimes we need to exchange views with Hamas on things like exchanges of prisoners.

"The other issue is that the terrible situation in the Gaza strip doesn't serve the purposes of Israel. Actually, it is a threat to Israel. If the Gaza strip explodes it will be turned at Israel, not at Egypt or any other actor. So our interest is to support the reconstruction of the Gaza strip and to prevent a humanitarian disaster. So far, Qatar was the most credible partner in this area."

For those reasons he was unhappy about recent attempts by the UAE and Egypt to push out Qatar from involvement in Gaza and try to replace it. "I don't know how much it will be successful," he said. "Presently we are feeling quite dependent on Qatar when it concerns financing the reconstruction of Gaza."

Brom saw Qatar's behaviour as driven partly by survival – "It's a small country in the Gulf surrounded by much larger threatening countries" – and partly by ambition.

"From our point of view we can understand the survival part, and even support it. When it comes to ambition or towards the area called 'trying to punch above your size', that is a problem. Then you are becoming a juggler and juggling too many balls at the same time, and some of them fall."

"The current trend, which is accelerated by the crisis between Qatar and the other Gulf states is pushing Qatar more and more away from cooperation ... towards two other actors with whom we have a problem. One of them is Iran and the other one is Erdogan's Turkey. That, I assume, will push Qatar away from Israel even further.

"I can see a way out [of the current situation] ... but Saudi Arabia and its allies have to give up demands that Qatar cannot accept. It's difficult for me to foresee a situation in which Qatar will give up al-Jazeera. They can ask for some modifications in the way that al-Jazeera is operating, but not for closing it.

"If the parties reach this kind of compromise agreement I think it will be possible to draw Qatar from its present location to a more reasonable place in the middle. Although I am Israeli I don't ask Qatar to give up completely its relationship with Iran. It's a matter of survival – they have a shared gas field which is the source of most of the income of Qatar."