Mystery of anonymous author and the Black Book on Qatar

An anonymously-written book produced by a seemingly fictitious organisation and promoted by a group of French-language websites appears to be the latest weapon in the Saudi-Emirati propaganda war with Qatar.

"Qatar: Le Livre Noir" (Qatar: The Black Book) is said to have been compiled by researchers from the Centre Euro Arabe pour Combattre l'Extrémisme (CEACE) but internet searches have so far failed to locate any details about the organisation or any mention of it except in connection with the mysterious Black Book.

The Black Book itself says CEACE was formed in Paris on 21 April this year, at a meeting of five human rights NGOs. The NGOs are not named, and the book says CEACE has decided "to postpone to a later date the disclosure of the identity of the organisations participating in the project". It says CEACE has also decided to maintain the anonymity of its researchers "for obvious reasons of security". The Black Book was initially posted online in Arabic under the title "Qatar: Al-Kitaab al-Aswad". A report in the Emirati newspaper al-Bayan on September 27 described it as "an extensive analysis of Qatar's role in supporting terrorism". Al-Khaleej, another Emirati paper, also published an article about it in September. The Saudi newspaper al-Riyadh had two reports (here and here) in October.

During November several inter-linked French-language websites have been publishing extracts from the book's French edition or articles about it written by journalist René Naba. They include Naba's personal website, En Point de Mire, plus Libnanews where Naba is described as a "partner" and Madaniya, where Naba is the site's "director".

Last year the same three websites published articles by Naba defending the Global Network for Rights and Development (GNRD), a strange organisation funded almost entirely via the UAE which closed down in July 2016.

Naba had several connections with GNRD. He was one of the speakers at a GNRD-organised conference on counter-terrorism in 2015 and is a consultant at the International Institute for Peace Justice and Human Rights (IIPJHR) which was a partner with GNRD in many of its activities. He also belongs to a "consultative panel" for the Scandinavian Institute for Human Rights (SIHR), an organisation which was jointly established by GNRD's founder-president, Loai Deeb, and Haytham Manna, a Syrian exile.

SIHR and IIPJHR are both based in Geneva at 1 Rue Richard Wagner which was also the address of GNRD's Swiss branch before it closed. 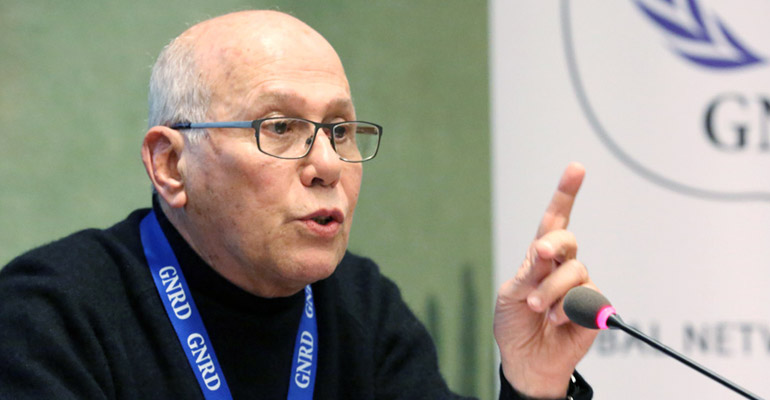 A surprise in Chapter 7

Skimming through the text of the Black Book, I was surprised and amused on reaching Chapter 7 to find myself and my website portrayed as the leading examples of Qatari soft power. The book's anonymous author seems confused about al-bab's web address, variously referring to it as albab.net, al-bab.net and al-bab.com, but maintains that it is "the best embodiment" of Qatar's media strategy:

The book goes on to say that after setting up al-bab as a website about Yemen I went to Qatar in search of funding and, following my stay in Doha, I expanded the site to include the other Arab countries. It seems to be implying that the expansion was a result of Qatari funding:

That is untrue. I don't remember exactly when the expansion happened but archived web pages show it was sometime between April 1999 and February 2000. At that point, though, I had never been to Qatar. My first visit was in 2003 and I went again in 2006. Those have been my only visits to Qatar. On both occasions I was reporting for the Guardian and the Guardian covered the full cost.

For readers unfamiliar with al-bab, I run the site myself. It doesn't employ anyone and has never had external funding, though it does generate a small income from Google ads and book sales through Amazon. The website is critical of all Arab regimes, including Qatar's (here, for example).

In 2014, according to the Black Book, I was instructed by Qatari intelligence to launch a campaign "against the institutions of the UAE", with supporting information provided by activists from Hamas and the Muslim Brotherhood:

Again, that is untrue and the book provides no evidence to support its claims. The talk of me conducting "a campaign" seems to be alluding to my lengthy investigation of GNRD which began in 2014. Nobody told me to do it. My interest in GNRD was triggered by the discovery that its founder had previously run a fake university and, the more I looked into it, the weirder the organisation became. The resulting articles relied on open sources, as readers can see. I had no need to contact anyone from Hamas or the Muslim Brotherhood about it – and I didn't do so.

In 2015, GNRD was raided by police amid suspicions about its funding. After that, its funds dried up and in 2016 it was declared bankrupt for failing to pay its employees' wages. The Black Book doesn't explain why it closed but says I toppled GNRD while working "in close collaboration" with the Qatari embassy in Norway, the pro-Israel lobby and Qatari intelligence:

That's also untrue but apparently my success in toppling GNRD meant I was "naturally destined to occupy a place of choice within the Qatar lobby". For good measure, the book adds that I also maintain contacts with British intelligence services which "turn a blind eye to the considerable sums" that I allegedly receive from Qatar: