Another UAE-linked rights group vanishes in a trail of debt 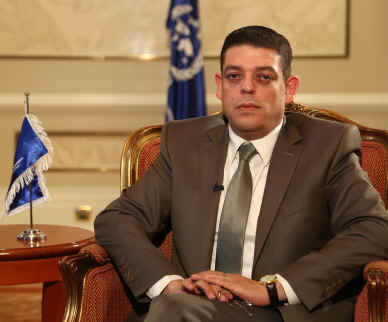 A second human rights organisation run by Loai Deeb – founder of the Emirati-linked Global Network for Rights and Development (GNRD) which went bankrupt last year – has run into financial trouble. The International Institute of Peace Justice and Human Rights (IIPJHR) has vanished from its Geneva office, pursued by creditors seeking to recover more than $30,000 in debts.

Palestinian-born Deeb, who previously ran a fake university from his home in Norway, established GNRD in 2008. Despite being one of the world's strangest human rights organisations it acquired consultative status at the United Nations, gained official recognition from the EU, established partnerships with several real universities and was registered for lobbying purposes at the European Parliament in Brussels.

In 2015, however, police raided GNRD's Norwegian headquarters as part of a $13 million money-laundering investigation and a year later it was declared bankrupt after failing to pay its employees' salaries. The money-laundering case has not yet been determined by the courts. GNRD and Deeb deny the charges and claim the accusations against them were instigated by the government of Qatar.

Before GNRD shut down it worked very closely with Swiss-based IIPJHR. The two organisations held numerous events together and sent joint observer missions to elections in Tunisia and Egypt. GNRD's Swiss branch office used the same address in Geneva as IIPJHR. Like GNRD, IIPJHR has consultative status at the United Nations.

Official registration documents show GNRD founder Loai Deeb is currently secretary-general of IIPJHR and his wife, Noura, is its president. Another of its board members is Evgenia Kondrakhina, a Russian who was formerly GNRD's chief executive:

The director of IIPJHR, until June last year, was Jean-François Fechino. He now heads the"Brussels International Center – Research and Human Rights", a new organisation operating from an address formerly used by GNRD for its Brussels branch office. Most of the new organisation's staff also previously worked for GNRD.

GNRD appears to have been one element in the propaganda war between the UAE and Qatar which has been running, off and on, for several years. In the course of this feud both countries have resorted to using front organisations and have also exploited the fruits of computer hacking. (For details of recent developments in that area, see The Quarrel with Qatar).

GNRD had an unusually favourable view of human rights in the UAE and at one point produced a worldwide human rights league table which gave the UAE a laughably high ranking. In 2014 Qatar arrested two researchers who had been sent by GNRD to investigate the abuse of migrant workers. They were eventually released without charge.

At its peak, GNRD employed dozens of staff, had offices in Norway, Belgium, Switzerland, Spain, Sudan, Jordan and the UAE – and an income of several million dollars a year. According to the Norwegian authorities almost all the income it received came from sources in the UAE.

GNRD has always denied being funded by the UAE government but evidence has now emerged of a direct connection between IIPJHR and two Emirati citizens.

IIPJHR was established in 2010 and Swiss official records show Loai Deeb took over as its secretary-general in March 2014. At the same time Noura Deeb became its president and Abu Jazar Ramadan, head of GNRD's Brussels office, became vice-president.

However, in May 2016 they all stepped down and two Emiratis living in Dubai took control. The records name them as Shamsa Majid Khalfan Qaraiban, who became president, and Yousuf Ali Ahmad Bin Zayed Alfalasi, who became vice-president.

The Emiratis remained in charge for precisely 14 days before handing IIPJHR back to Noura and Loai Deeb, as a subsequent document shows. There is nothing in the documents to explain the reason for this short-lived transfer.

Connections with the 'Black Book'

IIPJHR appears to be no longer functioning – its website and Twitter feed haven't been updated for well over a year – but there are several connections between IIPJHR, GNRD and a "Black Book" about Qatar which was recently published anonymously online.

The book purports to have been compiled by researchers from the "Centre Euro Arabe pour Combattre l'Extrémisme" (CEACE) – a previously unkown organisation which was allegedly formed in April this year by five unnamed human rights NGOs. The book adds that the researchers who compiled it are also remaining anonymous "for obvious reasons of security".

A skim through the book shows that these researchers – whoever they might be – have relied heavily on articles by a French journalist, René Naba, written for his personal website or published by Madaniya, a website where Naba is described as director.

Since the book was published, Naba has been very active in promoting it online (see previous blog post). Loai Deeb has also tweeted about the book: 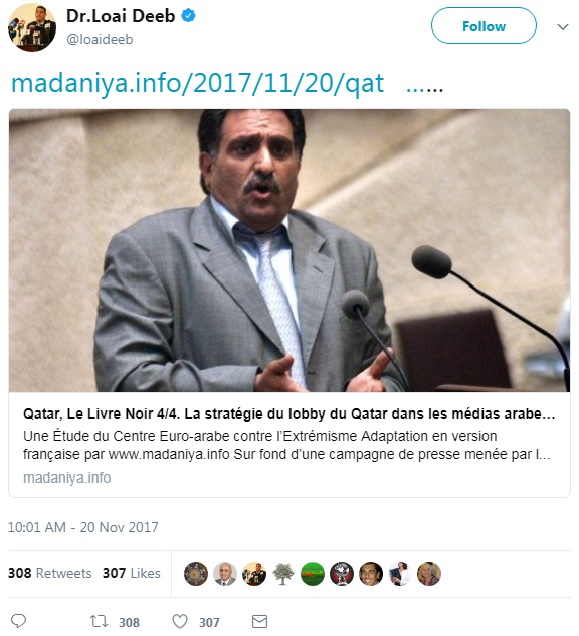 Naba was one of the speakers at a GNRD-organised conference on counter-terrorism in 2015 and is (or was) a consultant at IIPJHR. He also belongs to a "consultative panel" for the Scandinavian Institute for Human Rights (SIHR), an organisation which was jointly established by Loai Deeb, and Haytham Manna, a Syrian exile.

Last year Naba wrote an article defending GNRD in which he claimed the purpose of the Norwegian police raids had been to suppress valuable research into terrorism.

He wrote that documents seized by police included "a centerpiece of inestimable value" – a 1,000-page "encyclopedia" of terrorism which GNRD had been planning to publish, giving a country-by-country view of the "connections and funding of global jihadism".

Suppressing GNRD's encyclopedia of terrorism was "undoubtedly the real reason for this muscular search", he said.