Syria propaganda and the mysterious 'Sarah Abdallah': a Hizbullah connection? 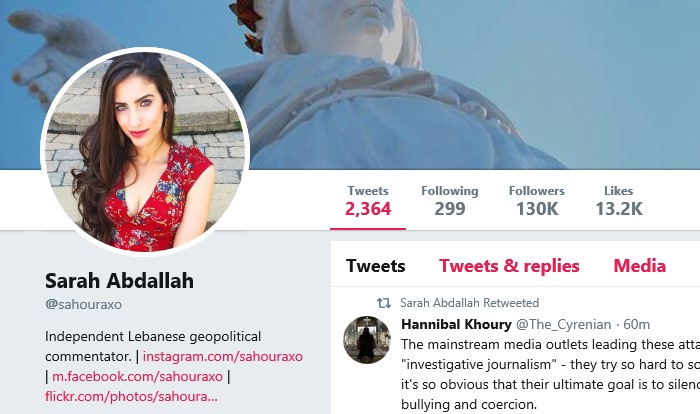 Yesterday dozens of Twitter users rallied to the defence of "Sarah Abdallah", a mysterious and possibly fictitious social media celebrity, following what they saw as a smear by the BBC.

A BBC report had identified the @sahouraxo Twitter account – currently operated under the name "Sarah Abdallah" – as one of the leading online promoters of disinformation about Syria.

"Sarah Abdallah tweets constant pro-Russia and pro-Assad messages, with a dollop of retweeting mostly aimed at attacking Barack Obama, other US Democrats and Saudi Arabia," the BBC report said ...

"In her Twitter profile she describes herself as an 'Independent Lebanese geopolitical commentator' but she has almost no online presence or published stories or writing away from social media platforms. A personal blog linked to by her account has no posts.

"Her tweets have been quoted by mainstream news outlets, but a Google News search indicates that she has not written any articles in either English or Arabic."

The BBC went on to say that a study by the research firm Graphika found "Sarah Abdallah" had "one of the most influential social media accounts in the online conversation about Syria, and specifically in pushing misinformation" ...

"The firm found that Sarah Abdallah's account was primarily followed by a number of different interest clusters: supporters of pro-Palestinian causes, Russians and Russian allies, white nationalists and those from the extremist alt-right, conservative American Trump supporters, far-right groups in Europe and conspiracy theorists.

"These groups were instrumental in making the hashtag #SyriaHoax trend after the chemical weapons attack in the rebel-held town of Khan Sheikhoun in April 2017.

"That hashtag, pushed by Sarah Abdallah and influential American conservative activists, became a worldwide trend on Twitter. Many of those tweeting it claimed that the chemical weapons attack was faked or a hoax."

Among those rallying to support "Sarah Abdallah" yesterday was the Russian embassy in South Africa, which tweeted: 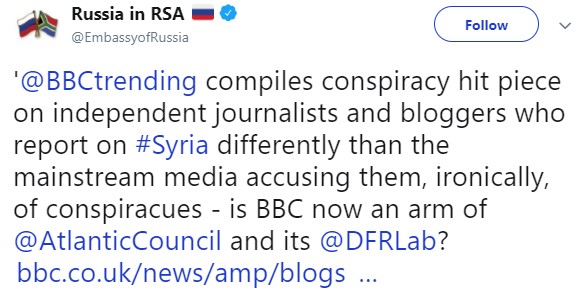 Others hailed "Sarah Abdallah" as a source of "authentic" news and an antidote to the coverage in mainstream media. One said:

"The answer to #bbc #fakenews is to follow Sarah Abdallah"

The "Sarah Abdallah" Twitter account has 130,000 followers – a surprisingly large number for someone who appears to exist only online, though this may be partly explained by the glamorous photos posted in her name.

Despite her popularity, however, it's hard to find evidence of her life outside social media. Her Twitter feed links to a website, sarahabdallah.net, but anyone who goes there hoping to find examples of her geopolitical commentary will be disappointed. The website (registered anonymously through a privacy protection company in Arizona) is empty apart from a note saying she is "Just a regular Lebanese girl who loves discussing geopolitics and current events. Coffee, books and manga too."

Whether or not she's a real person, "Sarah Abdallah" has had previous incarnations on social media. She formerly used two different handles – @jnoubiyeh and @muqawamist – both of which hint at a connection with Hizbullah, the Lebanese shia organisation which is fighting in Syria alongside the Assad regime.

In a Lebanese context, "Jnoubiyeh" indicates a woman from the south of the country, where Hizbullah fought a long struggle against Israeli occupation. "Muqawamist" is a hybrid Arabic-English word. The Arabic part – "muqawama" – means "resistance" and is used in Lebanon to refer to Hizbullah.

A search through the internet archives shows that in 2010 she was running a blog called "South Lebanon". In a profile note on the blog she said:

"I'm a proud Lebanese from Bint Jbeil. We are a hardy and stern people forged by war and the ways of the mountain; perhaps the only inhabitants of Lebanon not to have entirely degenerated into sensuality and decadence.

"I'm a seeker of understanding, lover of truth and despiser of ignorance."

Around the same time she was also running a Twitter account called Jnoubiyeh. The profile note on Twitter described her as "Lebanese from Bint Jbeil, Law student, human rights activist, anti-Zionist, seeker of understanding, lover of Truth and despiser of ignorance". It also said she was living in Montreal and South Lebanon.

"Sarah Abdallah" also blogged for a while under the name "Muqawamist". She deleted the blog early last year, though part of it has been archived by the Wayback Machine.

The surviving content includes several short posts praising the efforts of the Syrian army. There are also pictures of Christians in Aleppo and Homs who have been "liberated" by the regime. Other pictures show Russian troops distributing aid to displaced Syrians. "Sarah" comments: "The EU/US want you to believe this is just a figment of your imagination."